Want to Host a Garden Party for Frogs?

Create a backyard environment the amphibians won't be able to resist 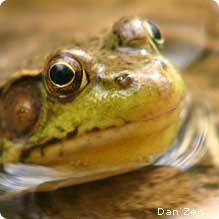 NOTHING SAYS SUMMER like a warm, star-kissed night, when you fall asleep to the gentle strains of the local frog chorus. If you’ve heard nary a peep or croak in years, don’t despair. As long as you have a grassy, unfenced yard and live near a park or natural area in a moist part of the country, you can easily attract choir members by creating a backyard environment frogs won’t be able to resist.

Luring frogs or toads to your backyard has other benefits besides nightly serenades, though. Both kinds of amphibians consume loads of insects such as mosquitoes and beetles as well as pests such as slugs. Kids find them irresistible. And while creating a backyard pond won’t save the world’s numerous imperiled frog species, it’s still a step in the right direction.

Fall or early spring are the best times to begin creating a frog-friendly habitat, say naturalists. And all you need to provide is water and cover. Water is key, of course, because nearly all amphibians return to water to spawn, and many species like to hang out at the water’s edge. But your frog pond doesn’t have to be large or elaborate—even a barrel sunk in the ground will suffice, experts say.

A flexible pool liner that can be contoured any way you like is the best medium for creating your pond, says Sam Droege, a wildlife biologist with the U.S. Geological Survey. Frogs prefer shallow ponds that gradually slope into deeper waters so they can easily hop in and out; flexible liners let them do this. If you opt for a pre-formed pool, place several rocks at water level to help the frogs get back out. Otherwise, you’ll inadvertently create a death trap.

“The usual problem when people create ponds is that the frogs can jump in, but then the sides are too steep for them to get out,” says Droege.

Resist the temptation to keep the pond neat and tidy. In fact, it helps to put some rocks in the bottom and add aquatic plants such as water lilies, sedges or water irises. If leaves, bird droppings or other debris fall in, all the better; this natural fertilizer will eventually provide food to pond organisms that feed the frogs. “You don’t want a crystal clear aquarium,” says Richard Farinato, director of The Humane Society of the United States’ captive wildlife protection program.

Aeration devices are unnecessary; if frogs need more oxygen, they’ll simply come to the surface and breathe. And waterfalls, while aesthetically pleasing, can actually be a turnoff for frogs, which prefer quiet water. Most important, though, don’t stock your pond with fish, says Owen Sexton, professor emeritus of biology at Washington University in St. Louis. Fish love to eat tadpoles, he says, and will quickly deplete the frog population.

Once your pool is established, you’ll need to provide some type of cover nearby to keep the frogs cool and moist and hidden from their terrestrial predators. Some good choices: swamp milkweed, joe-pye weed, cardinal flower, black-eyed Susans and ferns.

“Even placing a clay pot on its side provides shade and shelter,” says Farinato.

Leaving a section of your lawn near the pond and cover plants unmowed also helps because it provides additional shelter and food for the frogs. Mow the rest of your lawn on the highest lawnmower setting, and ditch the fertilizers and pesticides. “Because their skin is porous, these animals absorb toxics easily,” says Craig Tufts, the National Wildlife Federation’s chief naturalist.

Once you’ve provided water and shelter, you’re set. It isn’t necessary to set out food for the frogs; the plantings will attract the insects and other creatures they thrive on, and tadpoles will feed on the algae and other organisms that naturally occur in ponds. Just sit back and wait.

It may take a year or two before frogs or toads move in, so be patient. Your plants need some time to mature, and the frogs need to find you. Be aware, too, that your pond will attract only those frogs native to the area, and those that can thrive in the setting you’ve provided. It would be hard to get wood frogs, gray tree frogs or spring peepers to take up residence in your pond if you don’t live in a wooded area, for example, says biologist Randy Korb, author of a soon-to-be-released guidebook on Wisconsin frogs. And bullfrogs need more water than a backyard pond can provide, he says, so unless there’s a larger water source nearby, you can forget about seeing them.

If you’re tempted to stock your own frog pond, think twice. “Bringing in frogs is tricky,” warns Droege. If you purchase tadpoles from a supply house, you’re bringing in unknown amphibians from an unknown place. “Tadpoles from supply houses are often bullfrogs,” he says, which prey on other frogs and even birds.

You could transplant some tadpoles from a nearby pond, but Droege urges that you leave the adults alone. They’ve already decided where they want to live, and would likely just desert your pond. “Frogs and toads are good dispersers,” he says, “and it’s best if they find your pond and colonize it themselves.”

While frogs and toads make their homes throughout the United States, it’s easier to attract them to a backyard pond if you live in the northern and eastern states, where they’re plentiful. In the more arid southern and western regions, it may not be possible to lure frogs to a backyard pond.

“While there are many amphibians in arid regions, they’re very specialized and come out only in the rain,” says Droege. “They’re not really appropriate to have in ponds. You shouldn’t try to import frogs to an arid region, either, because they won’t be adapted to this habitat.”

Once your frog colony is flourishing, make sure to keep any house pets at bay; dogs and cats will be tempted to chase and kill your new backyard residents. But bring on the kids. “Children will catch them and hold onto them for a day or two, but that’s a good thing,” says Korb. “It’s important for kids to have direct contact with frogs because then they’ll appreciate them more.”

Melanie Radzicki McManus lives in Wisconsin. This is her first article for National Wildlife.