Watching Birds--in the Field and on the Web

To learn more about birds, scientists get help from competitive birders--who participte in "Big Days" and "Big Years"--as well as from casual, backyard bird-watchers, all of whom report results on the Internet 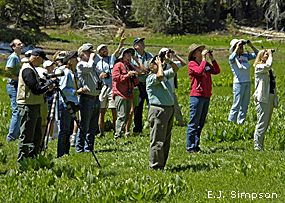 ON A SUNNY SATURDAY in May, a group of bicyclists pulled off a gravel trail into a clearing on the Chesapeake and Ohio Canal near Washington, D.C. Abandoning the bikes, they made a mad dash toward the woods, then came to an abrupt stop. In unison, all six trained their binoculars on a small, yellow-bellied, black-bibbed bird: a mourning warbler singing on a branch above. "I knew this spot would pay off," said Bruce Beehler, spinning around to spy on a spectacularly yellow Wilson's warbler. There was no time to stop and admire either bird, however. It was already 9:09 a.m., and the group had only 11 more hours to track down and tally as many birds as possible.

Once a year, Beehler, a biologist for Conservation International, organizes a group of friends to join him on a "Big Day" spent counting as many warbler species as they can between dawn and dusk. Their outing coincides with the peak of spring migration, when hundreds of millions of warblers and other songbirds that winter in Latin America and the Caribbean return to North America to breed. By nightfall, after 15 hours traversing the nation's capital and its suburbs by bike, foot and car, the group had recorded 27 of the region's 36 species, "not great but respectable," Beehler says.

His team was not alone. Whether they participate in grueling "bird-athons" such as Beehler's or merely gaze out the window at backyard feeders, bird-watchers represent a large, and expanding, constituency. According to one survey, the number of U.S. birders more than doubled, from 21 million to 54 million, between the mid-1980s and mid-1990s, and bird-watching remains the fastest-growing outdoor recreational activity. To capitalize on the hobby's popularity--as well as the power of the Internet--ornithologists have begun to enlist these nonprofessionals to help monitor the nation's bird populations.

Such help is badly needed. According to John Fitzpatrick, director of the Cornell Lab of Ornithology, many North American birds are in serious decline--including almost all grassland species (such as the bobolink and eastern meadowlark) and about half of all forest species (such as the wood thrush and red-headed woodpecker). Yet to establish clear, continent-wide population trends and identify trouble spots--both needed to protect imperiled birds--many more pairs of eyes and ears are needed than the country's limited number of ornithologists can provide.

Launched in 1900 by the National Audubon Society, the annual one-day Christmas Bird Count is the grandfather of what now are called citizen-science projects to survey birds. The most ambitious, begun in the 1960s, is the government-sponsored North American Breeding Bird Survey, in which volunteers monitor nearly 3,000 25-mile transects on a single day each summer. According to Sam Droege of the U.S. Geological Survey, who ran the census for many years, "Most of what is now known about the status of U.S. birds in the breeding season has come from the efforts of these volunteers."

Today the Internet has multiplied opportunities for volunteers. Fitzpatrick, whose lab and Audubon together sponsor about a dozen citizen-science projects, says that bird-watchers once had to send in their sightings by mail, "a sluggish and expensive process." Now birders can submit information on the groups' Web site, BirdSource, where it quickly feeds into national databases. Also important, he adds, is getting data back to the birders themselves: "For citizen science to work, participants need to be rewarded by seeing the results of their work."

BirdSource projects focus on species ranging from bluebirds, hawks and rare warblers to common suburban denizens such as cardinals and even urban pigeons. Participation in most of these efforts is growing. Launched in 1998, the annual Great Backyard Bird Count, for example, attracted 14,000 volunteers that year and 60,000 in 2001. Bird-watching's popularity is one explanation, says Fitzpatrick, but new technology is also important. Only half joking, he adds, "The Internet was invented for us."

The Chesapeake and Ohio Canal is one of 100 sites featured in Where the Birds Are, a book published in association with the National Wildlife Federation.