Why are southern giant petrels thriving on one peninsula, but declining almost everywhere else? 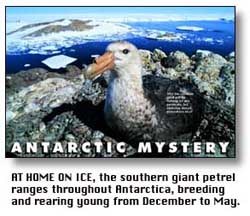 IT'S A BLUSTERY DAY on Humble Island, a tiny speck of rock tucked into a bight on the south end of Anvers Island, Antarctica. Snow squalls blow down from Marr Glacier, pasting the north side of the granite promontories that dominate this stark landscape. Buffeted by wind and snow, researcher Donna Patterson struggles uphill from the Zodiac she's anchored just offshore. Finally, the scientist reaches her quarry: a colony of southern giant petrels whose nests atop these rocky heights are filled with hungry hatchlings.

Sitting down beside a brooding female, Patterson talks soothingly and reaches gently beneath the bird's belly. "We have a new one," she announces, pulling out a tiny, whitish-gray fluff ball. After cradling the hatchling in her fleece-gloved hands, Patterson measures the length of its bill, then carefully slips the chick into a mesh bag to weigh it.

Like the petrels, Patterson, a Montana State University biologist, returns to this remote spot off Anvers Island each year. Based at Palmer Station - one of three Antarctic research centers operated by the U.S. National Science Foundation - she is conducting a long-term study of these muscular, albatrosslike creatures. Now in its eighth year, her research is beginning to reveal important insights into the biology and behavior of the species.

Her data may be coming just in time: Throughout most of its range, the southern giant petrel is inexplicably declining. The most recent international list of species at risk - the IUCN Red List of Threatened Species, released last fall - concludes that petrels and albatrosses as a group are in trouble worldwide, with 24 more threatened species today than in 1996. Over the past two decades, southern giant petrel populations have fallen between 30 and 35 percent. Yet those around Palmer Station are exceptions; they've doubled in the past 20 years. Scientists don't know why petrels are thriving here - or for that matter why they are declining elsewhere. Patterson hopes that her research will help answer both questions as well as help conservationists devise a strategy to rescue these rare birds wherever they are found.

An imposing bird - as big as a goose and with a six-foot wingspan - the southern giant petrel nests throughout the Antarctic continent (as well as on several subantarctic islands), although the status of some breeding colonies is unknown. Indeed, scientists know little about this species as a whole, in part because the birds live in such inaccessible places. But another problem is that petrels traditionally have been avoided, even by some bird lovers and biologists who are disgusted by two of the species' best-known habits: vomiting vile-smelling stomach oil when they feel threatened and feeding on dead seals, penguins and other rotting corpses. With nicknames such as "stink-pot," the bird "has gotten a bad rap," says Patterson.

In contrast, she believes that petrels play an important, yet unappreciated, role in the Antarctic ecosystem. Not only do these scavengers "clean up the Southern Ocean," she says they may help scientists gauge the health of the entire region. Long-lived birds - the oldest on record survived 50 years - petrels also feed on a variety of foods, making them an ideal Antarctic "indicator species." 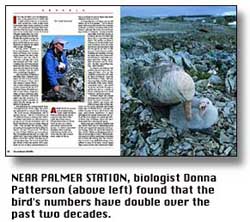 Patterson began her annual breeding-season census in 1992. Each day from December to April, weather permitting, she pulls on smelly field clothes and boats out to count, measure and weigh every chick on Humble Island. Last year she tallied 56 pairs of birds, all of which laid eggs, and closely monitored 31 pairs throughout the season. Periodically, she visits all the other islands and peninsulas within three miles of Palmer, where 420 additional pairs were breeding last spring.

Three years ago, Patterson realized that her census work was not addressing some of the most important questions about petrel biology: Where do adults find food for their chicks? Where do fledglings go before they're old enough to breed? For answers, she needed to follow individuals when they were outside the nesting area. Her solution was to attach tiny satellite-tracking transmitters to some of the birds. Barely bigger than a pack of gum, each transmitter sends data on the bird's precise location for up to 115 days. Only in its third season, the tracking research already "has been a real eye-opener," Patterson says.

Her most surprising result to date is just how far parents fly to find food for their chicks. In 1998, her first tracking season, Patterson discovered that males, which share brooding responsibilities with their mates, tended to travel 50 to 75 miles from the nest, primarily to scavenge carrion. Females, however, undertook epic, six-day journeys of between 2,000 and 3,000 miles to the edge of the nearest ice pack, where ocean upwelling produces abundant live food such as krill and squid.

She theorized that males, being the stronger and more aggressive of the two sexes, outcompete females for nearby carrion, forcing moms to travel far from home. But last year, her results were mixed: Though some females still flew out to the ice edge, others foraged close to the nest while some males traveled thousands of miles to the upwelling zone.

The great distances petrels must fly to feed their young may make them more vulnerable than stay-at-home species. Still, no one knows for sure why petrel populations are plummeting. So far all hypotheses finger human beings, whether directly or indirectly.

Scientists say that throughout Antarctica, for instance, an increased human presence - tourism, military activity and even scientific research - may be disturbing these sensitive birds so much that they fail to breed. (The region around Palmer Station, in fact, remains one of the continent's most remote and least disturbed.) Another culprit is commercial fishing, which is booming, often illegally, throughout the Southern Ocean. Indeed, Patterson has found fish hooks near the birds' nests or even embedded in their bodies. Another possibility is that global warming, known to be having an impact on the amount of sea ice around the continent, could be contributing to the decline as well.

But the latter hypothesis may generate even more mysteries than it solves. Measurements taken since the mid-1940s show that the average year-round temperature on the Antarctic Peninsula has increased by 3 to 4 degrees F, with mid-winter temperatures up by 7 to 9 degrees. While the rest of the continent has warmed by just a few degrees during this same period, the peninsula's rate of warming is ten times the global average. Why, then, are petrels doing better at one spot on the peninsula than they are anywhere else within their range?

"It's possible that higher temperatures have actually improved conditions for petrels, at least in the short run," speculates Patterson. Scientists already have documented warming-related shifts in the distribution and abundance of other species here. Elephant and fur seals, for example, once rare in the area around Palmer Station, are now quite common, as are the gentoo and chinstrap penguins that were absent in previous years. But Patterson warns that such changes are not necessarily good news: If global warming is indeed helping petrels thrive today, "the birds' success will be short-lived" if temperatures continue to rise in the future.