Biggest Animal That Ever Lived 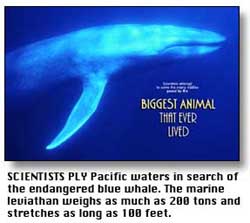 BIOLOGISTS John Calambokidis and Jay Barlow stand on the deck of the Sproul, a 120-foot research vessel from California's Scripps Institution of Oceanography, staring out over the Pacific. They are 60 miles out to sea, floating over the Cortez Bank, a sunken island off San Diego that provides excellent habitat for many marine species.

Suddenly Calambokidis sights a 30-foot-high spout in the distance. The news is relayed to the captain, and the ship slowly changes course. As the vessel nears the place of the sighting, a huge animal surfaces and exhales, the sound and force of its breath reverberating across the water. The Sproul's crew takes a deep, simultaneous breath as the creature slides under the surface. The size of the animal is awesome: It is nearly two-thirds the length of the ship.

A dorsal fin breaks the water. "It's a blue whale," exclaims Calambokidis, who works for Cascadia Research, an Olympia, Washington-based institute devoted to the study of marine mammals. The lanky scientist, 46, rushes to the stern, launches an 18-foot inflatable boat, revs its twin engines and takes off after the whale.

Within minutes, Calambokidis is circling the huge beast in rolling seas. From about 100 yards out, he snaps a picture of the markings on the animal's back to add to his library of blue whale mug shots. Then he moves in closer, pulling out a crossbow with a small dart attached. With the whale still above the waterline, he squeezes the trigger and the dart sails. It bounces off the behemoth's back, taking a small skin sample with it. The animal, as long as two buses, rolls through the sea, oblivious to the slight. But this small piece of skin, together with the photo, will add to a slim but growing body of knowledge on the largest animal that has ever lived on Earth.

That knowledge has increased especially quickly during the past 15 years, because scientists have discovered a large blue whale population that spends summer and early fall in the easily accessible waters off the coast of California. Marine mammal biologists such as Calambokidis have flocked to this area, building a profile of blue whales that will help them understand the animals worldwide. In addition to compiling a catalog of whale photos, these scientists have put listening devices into the water to eavesdrop on whale vocalizations, followed krill concentrations to find out how these giants eat, and tracked the whales by satellite to learn where they go when they leave U.S. waters.

Blue whales, found in all the oceans of the world, are true leviathans, stretching as long as 100 feet and weighing as much as 200 tons. (A Brachiosaurus, perhaps the largest dinosaur, weighed an estimated 50 tons.) Since the animals don't have to support their weight in water, there are few disadvantages to their enormous mass - and several advantages. One advantage is that it's easier for these mammals to stay warm. Another is that they have no predators - other than killer whales, which attack in packs - bold enough to take them on.

The size and speed of blue whales once served to discourage human whalers in the days of sail-powered ships and hand-thrown harpoons. But with the arrival of explosive harpoons and the floating factory vessels of the 1920s, the equation changed; more than 350,000 of the animals were killed in subsequent decades. By the 1960s, blue whales were thought to be near extinction, and the International Whaling Commission banned further hunting of this species.

Blue whale sightings were infrequent off the West Coast until the 1980s, when scattered reports began to surface. In 1991, Barlow, head of the Coastal Marine Mammal Research Program for the National Marine Fisheries Service in La Jolla, conducted an extensive survey of the whales off California. He estimated there were 2,049 blues, a finding that shocked researchers. "There were more blue whales in California coastal waters than were previously thought to be in the entire North Pacific," Barlow says.

Calambokidis remembers the first time he observed one of the animals. "We were in a 14-foot inflatable boat off California and saw a blue whale go down. We shut down the engine and waited for the animal to surface, hopefully within a mile of us. And then it came up ten yards from the boat. There was this frightening explosive sound of the blue whale exhaling. I mean we almost jumped in the water, it was so loud."

Biologists can hear blue whales blow at the surface from several miles away, often before they can see them. The loud sound results from the whales exchanging 80 to 90 percent of the air in their one-ton lungs with each breath (compared to a typical human air exchange of 10 to 15 percent). The whale's blowhole is so large a small child could crawl into it.

With so little known about blue whales or why they were in California waters, Calambokidis (who was then studying humpback whales) decided to add blues to his research program. He devised a system to identify individual animals by photographing the patterns on their sides. (Scars or marks on the whales' flukes, and the sizes and shapes of their dorsal fins, help with the identifications.) Calambokidis now has a photo catalog of more than 1,100 whales, a tool that allows him to recognize individual animals in other places and learn where they spend their off-seasons.

Blue whales were found in the summer and fall off California, and in the spring and fall off Baja California, but where they spent the winter was a mystery. To solve this riddle, Bruce Mate, a biologist at Oregon State University, attached radio tags to ten blue whales. He tracked one of these creatures to the Costa Rican Dome, an upwelling about 600 miles west of Central America.

In the winter of 1999, Calambokidis and his associates boated through this region and photographed 13 blue whales. When he matched the photos with his catalog of blues, he was amazed. "Seven out of the thirteen were animals we'd previously seen off California," he says. "This was it. This was their wintering grounds. And since we were seeing them in summer in California, nursing their calves at the later stages of lactation, the dome was the likely area where they gave birth."

Calambokidis' colleagues also found blue whale feces near the Costa Rican Dome, indicating that the whales may be using this area as feeding grounds. Though some other whale species go without food during the winter mating and calving season, the huge blues need to eat all the time, Calambokidis conjectures. "Humpbacks and gray whales go through long periods of fast in the winter, but not the blues." 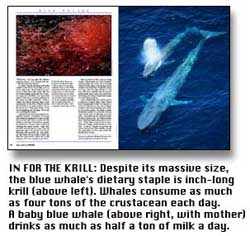 While Calambokidis and others have been studying whale numbers and movements, Don Croll, a biologist at the University of California-Santa Cruz, has been looking at how blue whales eat. His work has focused on the whales' principal food, the inch-long, shrimplike marine animals known as krill. On the West Coast, krill concentrations often occur about 10 to 30 miles offshore where the crustaceans can descend to dark waters to avoid predators such as birds and fish. Whales search for these krill hangouts, sneak up on them and feast.

From dive recorder data obtained off California, Croll has reconstructed blue whale feeding habits. The whale approaches rapidly from beneath the krill. Suddenly its huge mouth opens perpendicularly to its body, and its jaw disarticulates from the skull. "When they drop their mouth open, it basically brings the whale to a screeching halt. Then the throat expands into this enormous basket and scoops up the krill. It's very dramatic." A blue whale may consume about four tons of krill per day, the caloric equivalent of 12,000 hamburgers.

While feeding habits are well studied, little is known about whale calls. Blue whale vocalizations, though incredibly loud, are for the most part below the human hearing range. "It's the loudest sound made on Earth by an animal, yet we have no idea what it is for," says Calambokidis.

A breakthrough in the study of whale calls came in the early 1990s, thanks in part to the end of the Cold War. Christopher Clark, a scientist at Cornell University, was invited to look at the U.S. Navy's Sound Surveillance System (SOSUS), a formerly secret program for tracking submarines in the Northern Hemisphere. Clark visited a high-security naval facility in southern Virginia with no windows and full of machinery displaying data from underwater listening posts. "It was like stepping into a Tom Clancy novel," Clark recalls. "I walked down aisles hundreds of feet long, and every few feet there was another machine representing another part of the ocean. And I saw these very regular, commalike patterns on the various displays. And I asked What's that?' And they said, We call them snapping shrimp.' And I laughed and said, That's probably blue whales.'"

To Clark's surprise, listening posts in the Atlantic could detect blue whales as far as 2,000 miles away. "From Puerto Rico you could actually hear a blue whale that was off Newfoundland. In the first few hours I was exposed to SOSUS, I saw more blue whale sounds than had been published in the entire scientific literature." Further studies have shown that blue whale vocalizations peak in the North Atlantic and the North Pacific in the dead of winter. "But is this about sex? Is this about food? Is this about navigating and orienting? We're still just scratching the surface."

Scientists know that each dolphin has a signature whistle. If biologists can recognize individual dolphins by sound, perhaps one day they will discern individual blue whales as well. Says Kate Stafford, a graduate student at Oregon State University studying blue whale sounds, "Right now, we don't have the means to say, I see this particular call on the monitor and it's got this funny little jog at the end. And when I see that same call next week, I know, oh, that's the same animal.' We're not at that level yet, but we're hoping to get there."

Back on the Sproul after a day of chasing whales, Calambokidis and other biologists onboard gather their data. Part of knowing what role sound plays in the biology of blue whales is knowing who is doing the calling. Are they male? Are they female? Or are they both sexes? Working with the Sproul's chief scientist, Erin Oleson, and others from the Scripps Institution, Calambokidis hopes to answer these questions.

Later, Calambokidis and Barlow meet in a cabin and compare notes. Their studies have independently verified the large population off California and are now moving us toward a better understanding of the biology of this rare animal. The whale's current worldwide numbers are estimated at fewer than 15,000, and it is still listed as endangered. The population off California in particular is doing well, but Calambokidis warns that blue whales elsewhere are in decline. "That's why it's important to understand the biology of the animals we have here," he notes, "because we can take the lessons learned from these healthy animals and apply them in other areas where the picture is not so rosy."