Challenge in the Heart of Winter 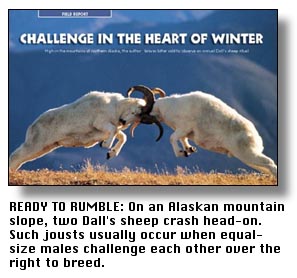 Early winter, Brooks Range, Alaska. North of the Arctic Circle, on the slopes of the mountains where the Dall´s sheep live, the sun went down before Thanksgiving and will not rise again until early January. For about four hours each day, the range brightens with enough twilight to make the animals visible. But then the darkness returns.

The 45 Dall´s sheep I am watching--rams, ewes and lambs--are gathered on a rocky cliff about a quarter mile away from where I am standing on the other side of the frozen Koyukuk River. This is breeding season and the sheep seem more interested in one another than the weather. In fact, they don´t seem bothered at all by the minus-60-degree Fahrenheit chill factor or the fierce, howling wind. I, on the other hand, am miserable. Despite several layers of protective clothing, a down sleeping bag over my shoulders and a sheltered place to sit, the cold pierces through every pore of my skin. Clearly, my vigil will be brief.

I am drawn to the Brooks Range by curiosity, wanting to learn something about how these creatures behave in almost perpetual darkness. All four kinds of North America´s mountain sheep are diurnal, usually exhibiting little nocturnal activity. The Brooks Range animals live further north than any other wild sheep in North America, and so I can´t help but wonder what happens to them during the Arctic winter.

The Dall´s sheep, named for nineteenth-century naturalist William H. Dall, is one of the world´s 40 subspecies of mountain sheep and the only one that has an all-white coat. Despite that coat, however, the animal is not hard to find in winter; its tracks are visible in new snow.

For a long time, I thought that these sheep evolved with white coats for camouflage. But a retired sheep biologist, Lyman Nichols, told me that their color may be more important in summer for protection from nearly 24 hours of sunlight that hammers their treeless, alpine habitat. Unlike dark shades that absorb heat, the white coats reflect the sun away from the animals.

Both sexes have horns. Ram horns are massive and curling--reaching a length of almost 50 inches--while those of ewes are slender, short and pointed. In proportion to their body size, male wild sheep have the largest horns of all ruminants. During rutting season, which runs from early November to mid-December, their horn growth almost stops. This slight pause leaves behind an annual ring that chronicles a ram´s age.

The dry, austere Brooks Range is excellent habitat for these animals. Of the 60,000 to 90,000 Dall´s sheep that range throughout the mountains of northwestern Canada and Alaska, 15,000 live in this range. In this harsh environment, the demands placed on the animals by the wintry weather and minimal rations of grass, sedge stems, lichens, moss and other foods should be challenge enough without also undergoing the rigors of the rut. But timing is crucial. Lambing must occur in the spring at the onset of the brief plant growing season, which in the Arctic occurs in late May or early June. With fair weather coming so late, it´s not surprising that these mountain sheep herds breed well after their southern cousins.

Entering the rut, Dall´s sheep are heavy with fat and their bodies are covered with a dense coat. Millions of coarse, hollow hairs lock in body heat and insulate against the cold. In sharp contrast to summer, when the animals look sleek in their light coats, their marvelous winter pelage gives them a blocky, almost roly-poly appearance that makes them appear twice as heavy as their 200-pound weight. 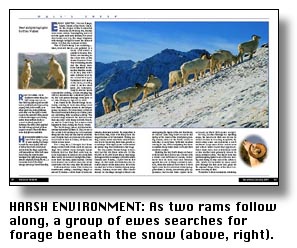 All day, I notice through my spotting scope, the rams move from ewe to ewe in search of clues to breeding receptivity. By scent alone a ram can determine a ewe&acute;s readiness. Large rams follow certain ewes and attack lesser males that approach. Rams chase ewes, kick or feint head butts at one another and generally remain in near-constant motion. The lambs born the previous spring spend most of the day feeding and trying to stay out of the commotion. When not harassed by rams, ewes paw through the thin snow and graze on the exposed forage. None of the rams I observe ever stop to feed.

To survive in these mountains, wintering sheep reduce daily activities and avoid needless energy waste and heat loss. Therein lies the challenge, and contradiction, of the late rut. Because he feeds sparingly, if at all, a ram can lose as much as one-sixth of his body weight during the rut, thus facing winter in a weakened condition. For the lambs, their first winter is also a severe test. Since all of their summer food consumption went toward body growth, they have no body fat to provide a survival margin.

During the rut, equal-sized rams will fight over an estrus ewe, but most of the time a predetermined dominance hierarchy minimizes battles. All summer the mature males fed placidly together, apart from the larger groups of ewes and lambs. But at about the time of the first snowfall in October, the rams begin testing one another. As autumn progresses, hormonal surges lead to intolerance and aggression. Rams gather in tight "huddles" to display their curling headgear. Larger males easily intimidate subordinate rams; their showy horns are enough to establish dominance without actual combat. Head-butting determines status among similar-sized rams.

Serious dominance clashes are highly stylized affairs. One ram might approach another in a challenging posture called the "low stretch." These equal-size males then stand eye-to-eye for several minutes, as if examining each other&acute;s horns. Direct eye contact might also be a challenge and stimulate belligerence. They may threat jump at another, but stop short of actual contact. Then, after a prolonged tête-à-tête, they seem to lose interest in one another and move slowly away, maybe even begin grazing.

Suddenly, they whirl, rear to their hind legs and charge. A few feet apart they lower and come smashing into one another with a twist of horns and all the force their driving legs can muster. The head-on collision can stagger one or both animals. After a short break, the whole procedure is repeated until finally one ram submits, often by rubbing or licking the horns and face of his opponent.

Some of these head-crunching jousts can last for hours. Although serious injuries are rare--mountain sheep brains are covered with two protective layers of bone--shoulder and facial injuries are common. In the end, a ram&acute;s position in the hierarchy determines his breeding success. This is Nature&acute;s way of selecting the strongest animals as breeders. Ironically, rams of lesser stature, because they burn less energy on breeding, may ultimately stand a better chance of surviving the harsh winter months.

Just before darkness descends again over the mountains, I watch two rams chase a ewe onto a narrow slope. There the males stop, pivot and smash into one another. Despite the howling wind, the sound of the collision booms loudly across the icy slopes. I pack up all of my gear and hike carefully down a trail to the weather-beaten, 1920s-era cabin where I am staying. On the peak above, some of the ewes and lambs are finally bedding down, but most of the rams continue to scurry about.

An hour later, I step outside the cabin to gather some wood for the stove. The wind has stilled, the temperature has dropped even further, and other than the crunch of snow under my feet, the mountains are silent. Already the first faint, green bands of the aurora borealis drift overhead and a gibbous moon hangs above the peaks.

Balancing a load of split spruce in my arms, I turn and head back to the cabin. But before I reach the door, a distant, crashing noise stops me in my tracks. Then I hear it again: out of the darkness, the eerie sound of horn hitting horn. Across the river, two rams are challenging each other in the heart of winter.