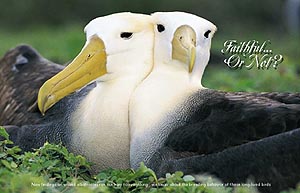 BONDING for the long haul,
a pair of albatrosses rests together.

THE AIR HANGS HEAVY and still, steamy with salt spray and recent torrential downpours, as hundreds of waved albatrosses soar over the unbroken Pacific Ocean to arrive, as they do every year, on the wave-beaten shores of Española Island. Save for a little speck of land along the coast of South America, home to a few stray pairs, this southernmost island in Ecuador's Galápagos group is the only place in the world where these splendid seabirds--named for the thin wavy lines on their chests and shoulders--come to breed.

Exactly how they breed, however, is now undergoing scientific scrutiny. The species, along with other albatrosses, was long thought to be the model of monogamy in the natural world. Now, thanks to researcher Kate Huyvaert, a Ph.D. student working with behavioral ecologist Patty Parker at the University of Missouri-St. Louis, that picture is getting a new look.

In fact, what Huyvaert has discovered in a dawn-to-dusk study of 300 individuals on Española runs contrary to everything known about all species of albatrosses and other large, long-lived birds that invest great efforts into raising a single offspring. It even raises questions about tenets of evolutionary theory that postulate that each male must ensure that his genes, and his alone, get passed on to the chicks that he raises.

The waved albatross is the only truly tropical member of the spectacular albatross tribe, whose 14 species mainly inhabit the periphery of Antarctica or the cooler regions of the north Pacific. All of them are large, long-lived birds (some are thought to reach 70 years or more).

Young albatrosses return to their native colonies for the first time when they are already several years old. They proceed to court and socialize with other unmated birds for many more years before selecting a mate to which, conventional wisdom says, they will be faithful for the rest of their lives. The waved albatross is no exception--or so everyone thought until Huyvaert started looking more closely and began uncovering a bewildering tangle of multiple matings and extra-pair paternity.

Her natural outdoor laboratory on Española Island is the scene of sheer magic as the breeding season unfolds. Offshore, great rafts of the seabirds rise and fall slowly on lazy swells, their white heads glowing in the faint afternoon sun beneath an approaching line of dark clouds. By the scores, they lift off on laboring wingbeats and turn toward land, soaring like slender sailplanes over the rugged basaltic cliffline, then banking low to swell the ranks of those already on the ground.

It is April and at this time of year, the island, normally rugged and austere, seems almost genteel. The lingering rainy season has dispelled brooding, low clouds and chased away all vestiges of the steady trade winds that blow here most of the year. Arid boulderfields have been tranformed into the nearest thing to a flower-studded meadow this island will ever see. And now the mood is even further cheered as dozens of the two-and-a-half-foot, eight-pound albatrosses strut about, courting, mating and socializing.

As part of their elaborate courtship dances, they bow, nod, sky-point, duck, fake-preen and bill-rattle, gaping widely and circling their bill tips together in a fencing routine. These seemingly random and erratic moves are actually a closely choreographed sequence of precisely timed gestures interchangeably performed by both male and female.

Each time one in a pair tucks a beak to a shoulder in a fake preen, the other stretches a head down low and claps his or her beak so fast for several seconds that the sound is like castanets--whereupon the first bird swings its head high in a vigorous arc and snaps its bill loudly: Clop. The whole performance is punctuated with screams, moans, sighs and strangely modulated trumpeting sounds. 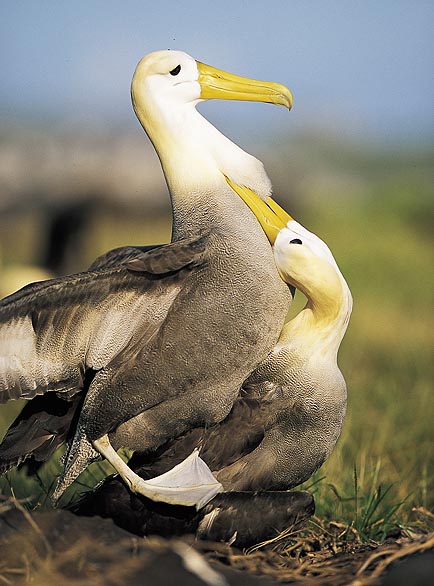 MATING takes place throughout the colony at the beginning of each breeding season--sometimes after the courtship displays, other times during quick, rough-and-tumble encounters, or forced copulations.

As the sun sinks toward the shoulder of the island, relieving the oppressive heat of the day, the pace quickens. More and more birds land--not the most graceful exercise as they attempt, often unsuccessfully, to slow down from high-speed glides to controlled stalls. Undeterred by crash landings, the new arrivals join the courtship sessions, sometimes in duos, trios or even quartets-- wandering about, engaging new potential partners in dance or attacking perceived rivals. Chases and loud fights erupt regularly. Some pairs, having completed a whole bout of dancing without missing a beat, finally conclude by bowing repeatedly at the ground, then settle down together, dozing cheek to cheek, or preening each other's heads and necks ever so delicately.

Some females have already laid their huge, single egg and are sitting resolutely for the first incubation stint while their mates depart to feed at sea. For 62 days the two will take turns sitting on the egg, spelling each other every three weeks or so until it hatches. Over the next nine months, they will partake equally in all of the chick-rearing duties, faithfully sharing roles from brooding the small fluff-balls to traveling on 2,000-mile commutes to bring back fish and squid caught in the rich upwelling waters along the continental shelf of Peru.

For Huyvaert, sorting out what all this means came as a complete coincidence. She had been spending a lot of time on Española as a student working closely with her mentor and Master's Degree advisor David Anderson, a seabird researcher and professor of evolutionary biology at Wake Forest University in North Carolina. At one point, she even took a whole year off from her own studies and spent ten straight months on the island as a field assistant.

Like many researchers before them, they had both noticed that in addition to the exuberant courtship, occasional fighting and other frenetic activity in the colony, there was also an inordinate amount of mating going on apparently willy-nilly. Some of it seemed orderly and calm and appeared to reflect the behavior of established pairs, but there was also a lot of rough-and-tumble, aggressive-looking chases that seemed more like forced copulations than anything else.

This behavior had long been brushed aside by other researchers as either that of youngsters not yet acquainted with the etiquette of complex courtship, or else a form of aggression, whereby territorial males assert their dominance by pinning down intruders, male or female, and faking a mating. But Anderson and Huyvaert were not so sure, so he suggested that they do a little project on the side: Carry out some DNA paternity tests on a few chicks to see if they had actually been sired by the apparent fathers who were looking after them. For that project, they collaborated with Parker and members of her lab.

When the results emerged from the lab, the researchers' jaws all dropped. One out of every four of the chicks tested did not match the DNA fingerprint of its "father." How could this be? Why would so many male waved albatrosses, unwittingly perhaps, be spending many months each year flying untold thousands of miles to feed a chick that stands a good chance of not being their own?

To find the answers, Huyvaert again teamed up with Parker, an expert in the use of molecular tools and now her Ph.D. advisor. Then the young researcher returned to Española and her birds. She staked out an area roughly the size of an elongated football field in which she and two helpers banded all 300 or so albatrosses that had returned to nest there this year. Ignoring the baking sun and swarming flies, the trio diligently recorded every single aggressive interaction or mating attempt that took place.

By the end of 40 days--the time span when the birds establish themselves, mate and lay eggs--the researchers had observed 1,724 actual matings. "We know exactly the time and the place and the context and detail of every one of these," Huyvaert says. The record was held by one female who mated 85 times with 49 different partners in seven weeks. In the middle of it all, this bird laid an egg but abandoned it and continued to mate. So much for the lifelong monogamy everyone had thought ruled waved albatross society.

Now, tanned golden-brown, Huyvaert hops confidently from boulder to boulder, her ponytail faded by the sun. At the end of each day, she checks where every individual in her colony is settling down for the night, who is with whom, what eggs have been laid. That will give her the backdrop against which to gauge each individual's mating performances for the season.

In all during this period, she has counted 140 eggs laid in her study plot, from which, two months later, 32 chicks will hatch. The other eggs were abandoned, lost or broken, the consequence of mysterious quirks of the species, which do not build nests the way other albatrosses do. Instead, they lay their eggs directly on the uneven, rocky ground and proceed to shuffle them about for no known reason, sometimes moving them more than 100 feet in just a few days with the egg held between bent legs.

For the chicks that do hatch, Huyvaert's next task is to take a tiny blood sample from its wing to match it against samples from adults already on file. She compares all the DNA records of each mother and caretaking "father," as well as every sire, and she reviews her behavioral notes that record with which bird each one mated, and how often.

Now that she knows that the waved albatross has already broken all the rules for birds of their type, Huyvaert is anxious to find out if there is more than one strategy used by these unique creatures to raise a family--the conventional nuclear family versus the extended or mixed version--and if so what could be the evolutionary benefits that have led to such an unorthodox approach.

Even before her results are in, she is already preparing for what will be her eighth season on Española Island, returning there each year almost as faultlessly as the birds themselves. "It's really a bit silly for me to be heading back out into the field when there's so much still to do with all the material already in hand." She pauses, then quickly adds, "But to be able to tell from year to year what's going on--how can I pass up the chance?"

Tui De Roy, a roving editor of this magazine, grew up in the Galápagos Islands. She and her partner Mark Jones returned to Española Island last year to cover this story.