Fighting the Winds of Change 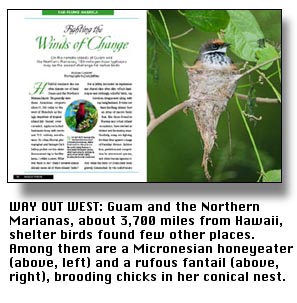 Hawaii residents like me often dismiss out of hand Guam and the Northern Mariana Islands. We generally view these American outposts about 3,700 miles to the west of Honolulu as the ugly stepsisters of tropical island life: humid, overcrowded, typhoon-lashed backwaters lousy with resorts and U.S. military installations. So when Hawaii photographer and biologist Jack Jeffrey pulled out his slides from a recent trip to the Marianas, I stifled a yawn. What was there to see? Hadn´t invasive snakes already eaten all of these islands´ birds?


But as Jeffrey recounted his experiences and shared slide after slide of lush landscapes and strikingly colorful birds, my boredom disappeared along with my benightedness. It turns out these far-flung islands host an array of native birds that, like those found in Hawaii and other island ecosystems, have evolved in distinct and fascinating ways. Similarly, many are fighting for their lives against a range of familiar threats: habitat loss, predation and competition by introduced species, and sheer human ignorance. And while the birds of Guam have been gravely diminished by the unfortunate introduction of brown tree snakes, the same isn´t true of the other, smaller islands to the north.

Formed by volcanic action 25 million years ago, the Marianas were first settled about 1,500 B.C., perhaps by Indonesians voyaging across the Pacific in outrigger canoes. Like many Pacific islanders, including the Hawaiians, the legacy of these early inhabitants includes dozens of extinct bird species—most of them the large, flightless type so desirable for food. And subsequent centuries of human use, including 400 years of Spanish, German and Japanese colonialism, have irrevocably altered the islands.

"Too many alien species have been introduced and too many pieces of the puzzle are missing to ever restore it to the way it was," says Jeffrey, a U.S. Fish and Wildlife Service scientist who studies imperiled birds.

The islands of the archipelago (which extends about 450 nautical miles from Guam to the northernmost outcropping of Farallon de Pajaros) are not large enough, isolated enough and sufficiently distant from one another to allow for the development of dramatically different species between islands. Guam, about three times the size of the District of Columbia, is slightly larger than all 14 of the Northern Mariana Islands combined.

Although politically tied to the United States—Guam as a territory and the Northern Mariana Islands as a commonwealth—the archipelago is geographically a part of Micronesia. Roughly equidistant from Japan, the Philippines and New Guinea, the bird life of the Marianas has been strongly influenced by these countries. Still, the Marianas´ species have all evolved in ways that distinguish them from their distant relatives. 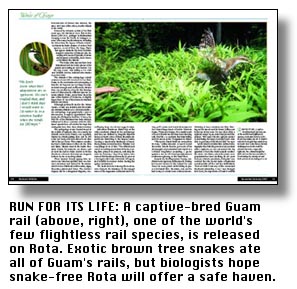 The archipelago is also located smack in the middle of typhoon alley. As a result, the islands (especially Guam) are regularly blasted by winds gusting from 120 to 150 miles per hour, and sometimes more than 180 miles per hour. This extreme weather has had a pronounced effect on the flora and fauna. Mature trees in the native limestone forests, for example, are short—just 20 to 40 feet tall on Guam and 40 to 60 feet elsewhere—because their tops are frequently shorn by the screeching winds.

These unusual forests sprang from ancient coral benches uplifted from sea level over centuries and turned to limestone, which is now blanketed with mosses, algae, flowering plants and ferns. The verdant drapery can be a dangerous disguise, camouflaging deep cracks and jagged edges.

Limestone forests are found only on the older, southern islands in the archipelago and they are defined by irregular deposits known as karst. Some of these limestone deposits are dissolving in the tropical rains, creating a treacherous landscape of razor- sharp pinnacles and narrow fissures that may plunge 10 to 15 feet. "The difficult part comes in walking across this old karst, moving from pinnacle to pinnacle, with deep fissures in between," says Gary Wiles, who roamed this landscape for nearly 20 years as a biologist with Guam´s Division of Aquatic and Wildlife Resources before leaving the agency last summer.

The karst on Rota is among the most severe of any in the Marianas. It discouraged some of the sugarcane cultivation and military, golf course and resort development that erased large tracts of native forest on Guam, Tinian and Saipan. As a result, much of Rota´s forests are still intact and teeming with bird life—a condition that lured Jeffrey and his camera to the 33-square-mile island.

"The native forest birds are everywhere on Rota," Jeffrey remarks. It was in Rota´s limestone forests that he got most of his photographs and witnessed such sights as a collared kingfisher pounding a gecko against a tree to kill it and phosphorescent mushrooms glowing on the forest floor.

Despite the thrilling natural beauty, conditions were rigorous, Jeffrey recalls. During his recent travels to the island, he was forced to wear gloves while hiking to protect his hands from limestone cuts, and he had to stay in a hotel room without air-conditioning to keep condensation from forming on his camera and its lenses. Jeffrey was holed up in his room for two days while a typhoon swept by, an event that proved fortuitous. "If it wasn´t for the typhoon partially defoliating the trees, I wouldn´t have been able to get many of the shots I did," he says.

While it seems evident from Jeffrey´s photographs that bird life goes on much as usual after a typhoon, no one can answer the big question of how the birds actually weather the storm. On Guam, where the native crow population has been declining for 20 years because of snake predation, biologists were worried that the recent spate of typhoons would polish off the last few individuals. "But we didn´t lose any of the crows and that´s just astounding to me," says biologist Bob Beck, the supervisor of Guam´s wildlife office, who has spent some 25 years tromping through the forests and coastlines of the Marianas. "Did they just hunker to the ground and hang out? We don´t know what their adaptations are to typhoons. No one´s studied that, and I don´t think that I would want to. I´d rather be in a concrete bunker when the winds hit 180 mph."

Stephen Mosher, a University of Idaho graduate student who encountered typhoons on Saipan while studying the endangered reed warbler, thinks the forest birds might retreat to inland cliff lines along the upland plateaus to hide from winds that, he says, "left the trees looking like sticks. But nobody really knows what they do."

Besides their ability to simply withstand the winds, some bird species have specifically adapted to life in the typhoon-damaged forest. Lacking the strong beak of a woodpecker, for instance, the cavity-dwelling collared kingfisher instead carves out its nesting holes in the powdery soft wood of storm-damaged branches.

Mosher´s work on the reed warbler has also turned up new insights into its adaptive behavior. The bird, known for its intense, prolonged song, was long thought to share the breeding patterns of Hawaiian forest birds, nesting from January to May. But Mosher found that the birds nest almost all year, except October, November and December—the tail end of the typhoon season. When four typhoons blasted across the islands in 1997, both nests and banded birds were lost. Some mortality is probably normal, says the scientist, but troubles arise when bird populations drop so low that they cannot recover after severe natural events.

Another species, the Guam swiftlet, uses the karst in a different way: It dwells in caves that form in the eroding limestone. Jeffrey recalls experiencing a thrill while standing in the pitch blackness of a cave as swiftlets rushed past his head. The birds are unusual because, like bats, they rely on echolocation to find their way into and out of caves. "Unfortunately, we still have a poor idea why this species became rare," Wiles says. "Cave disturbance is one likely candidate. Pesticides are another possibility. On Guam, snakes are keeping numbers down at the present, but they may not have caused the original decline."

Habitat loss and disturbance have taken their toll in unexpected ways, too. Beck recalls that on Guam, some people initially blamed the plummeting numbers of birds on a rush of development in the 1980s. For years, this assumption masked the true culprit: the brown tree snake, an exotic species that arrived in Guam as a stowaway on cargo ships after World War II. 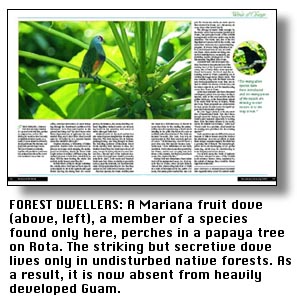 The damage to native birds wrought by the snake, which has no natural predators in Guam, has prompted much of the wildlife management work now under way in the Marianas. The Guam rail, one of the few flightless rail species left in the world, was saved from extinction by a captive-breeding program. It is now being introduced on Rota and released into an area on northern Guam where snakes are being controlled. Mainland zoos, meanwhile, are pursuing captive propagation of the Micronesian kingfisher from Guam.

Scientists have also developed electrical barriers to keep snakes out of the nesting trees of the imperiled Mariana crow, one of only three crow species found in Oceania. But Beck says the remaining crows on Guam apparently are so old that their eggs are no longer viable. This new wrinkle, along with the desire to maintain bird populations on more than one island to reduce the chance of extinction, has led some experts to call for translocating crows from Rota to Guam.

Wiles says scientists also have discussed contingency plans to move some endemic species, such as the reed warbler and the golden white-eye, to the far northern islands if the snake finds its way to Saipan, Tinian and Rota. These proposals are controversial, he says, partly because many biologists oppose any introduction of species.

An even bigger obstacle is the uncertain fate of translocated birds. "We don´t know enough about the biology to know how the birds might respond, especially in moving them from limestone forests to the north, where the islands are volcanic," Wiles says. "Food could be a problem. And would we be causing new problems for the existing species?"

Such questions remain difficult to answer because so little is known about the birds of the Marianas. Yet even as efforts to study these unique creatures expand, the birds face a growing list of threats. The newest might prove the most challenging of all: global warming, which may be contributing to more frequent and severe storms.

For untold years, the birds of typhoon alley have adapted to some of the world´s most extreme storms. Now, weakened by the winds of change, they could be blown right into extinction.

Joan Conrow is a Hawaii-based journalist who regularly writes about the natural world.