Our Image of Elephants

Human perceptions of Earth's biggest land mammal, as shown in four centuries of art, are colored by the peculiar prisms of history

FOR THOUSANDS OF YEARS, Earth's largest living land animal - the elephant - has ranked with the dog, horse and camel as a companion to human beings. Its size and unmatched physique have inspired awe, fear and respect in both laymen and scholars. Pliny the Elder and Aristotle reflected on the massive pachyderm. And over the years, historians, hunters, poets, artists, naturalists and paleontologists alike have chronicled its roles in society. They have celebrated and honored the elephant as a source of meat and ivory, a symbol of majesty used as state gifts, a mode of transportation, a centerpiece of entertainment in circuses and zoos.

The images on the following pages were part of "Nature's Great Masterpiece: The Elephant," an exhibition at the Ewell Sale Stewart Library of The Academy of Natural Sciences in Philadelphia that featured four centuries of elephant-related books, manuscripts, photographs and prints. Ranging from a mythical illustration to a political cartoon to a meticulous study on locomotion, these works illustrate both mankind's knowledge and misconceptions over the years, all of which have contributed to the allure of the beast. 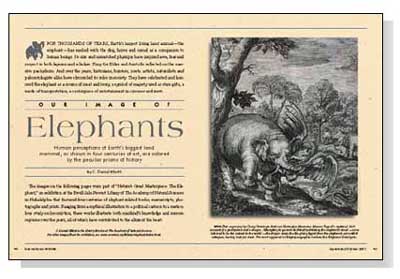 1715: This engraving (above) by Georg Christoph Petri von Hartenfels illustrates Edward Topsell's mythical 1607 account of a pachyderm and a dragon. Attempting to quench its thirst by drinking the elephant's blood - once believed to be the coldest in the world - the dragon sucks the life-giving liquid from the elephant's ear until it collapses, leaving both for dead. The work appeared in Elephantographia Curiosa Seu Elephanti Descriptio.

1731: Falling headfirst into a concealed pit, an elephant unknowingly meets its fate (below right) while others follow innocently behind, as depicted in Peter Kolb's book The Present State of the Cape of Good Hope. In both Africa and Asia, elephants were trapped in smooth-sloping pits covered with branches and a layer of earth. A spike in the bottom of the pit impaled the animal. Other forms of capture included rings of fire in Africa and keddahs - or corrals - in Asia. 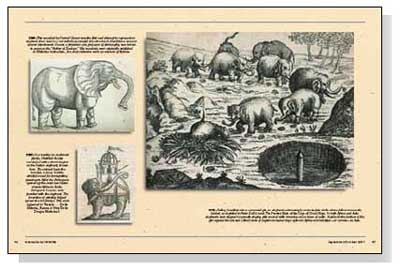 1587: This woodcut (above, top left) by Conrad Gesner was the first real attempt to represent an elephant from nature - not entirely successful since the trunk resembles a vacuum cleaner attachment. Gesner, a physician and professor of philosophy, was known to many as the "Father of Zoology." His woodcuts were originally published in Historiae Animalium, the most extensive work on animals of its time.

1585: In a treatise on medicinal plants, Cristóbal Acosta concluded with a short chapter on the Indian elephant, shown here (above left). The animal bears the howdah, a large, boxlike structure used for transporting passengers. After the Portuguese opened up the main sea routes around Africa to India, Europeans became more familiar with the elephant. The invention of printing helped spread the knowledge. This work appeared in Trattato . . . Della Historia, Natura et Virtv Delle Droghe Medicinali.

1874: Thomas Nast's "The Third Term Panic," published in Harper's Weekly, depicted a donkey in lion skin scaring away other animals, including an elephant labeled "The Republican Vote." The political cartoon followed a New York Herald editorial accusing President Ulysses S. Grant of "Caesarism," fearing he would run for a third term. The paper had also run a fabricated circulation-boosting story about escaped animals from the Central Park Zoo. Believed to be clever, steadfast and easily controlled (but unmanageable when frightened), the elephant eventually came to symbolize the Republican Party. 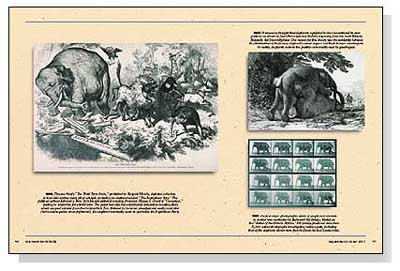 1803: It was once thought that elephants copulated in the conventional human position, as shown in Jean-Pierre-Laurent Hoüel's engraving (above top right) from his book Histoire Naturelle des Deux Éléphans. One reason for this theory was the similarity between the distribution of the female elephant's sexual organs and their human counterparts. In reality, elephants mate in the position universally used by quadrupeds.

1887: The first major photographic study of people and animals in motion was conducted by Eadweard Muybridge. Hailed as the "Father of the Motion Picture," Muybridge produced more than 12,000 action photographs investigating various gaits, including that of the elephant, shown here (above right) from his book Animal Locomotion.

C. Danial Elliott is the library director at The Academy of Natural Sciences.