Records In The Rock 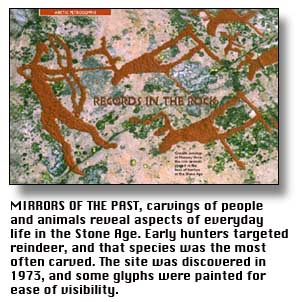 LATE IN AN EVENING in 1973, a father and his son far north of the Arctic Circle were walking home along the coast near Alta in Norway. Suddenly, in the soft, slanting light of the midnight sun, they saw ice­polished slopes of granite come alive with images of animals and humans. They had happened upon rock carvings that have since provided archaeologists with tantalizing glimpses of the life and lore of Stone Age people.

There are more than 3,000 of these petroglyphs, and additional ones are discovered each year. They offer a magic mirror of the distant past, a look at life thousands of years ago when animals were the center of the human world. People hunted these beasts, ate them, worshipped them, and with infinite patience and primitive tools, chiseled their images onto a record for time.

Since the discovery, archaeologists have cleaned the sloping granite rocks and removed accumulated plant cover from nearby rock faces. What they´ve found has helped them to understand ancient cultures, but the news isn´t all good. The carvings, which are dated by measuring the age of shoreline displacement of the carved rocks, now face a modern-day peril: air pollution.

Alta, less than 200 miles from the northernmost point of Europe, was probably the holiest place in the North. "This was a sacred site for more than 4,000 years," says Karin Tansem, former curator of the Alta Museum, built near the petroglyph­covered rocks. "The first carvings were made about 7,000 years ago, but for unknown reasons, all carving ceased about 500 B.C."

Fourteen thousand years ago, during the last Ice Age, this region of Norway, called Finnmark, was covered by mile­thick ice caps. As the ice melted in the waning millennia of the Ice Age, the land, freed from this enormous burden, began to rise. As the ice left, people arrived in this game­rich, fish­rich region, the first settling in simple sod huts and tents made of fur about 10,000 years ago. Inland they were hunter­gatherers, with reindeer and elk (the European moose) as their main prey. Along the coast they fished, mainly for abundant cod.

About 7,000 years ago, probably prompted by a powerful religio­supernatural need and possibly guided by inspired shamans, the people began to record on rock the animals of their world. To make the glyphs, the ancient carvers used chisels, probably of hard, fine­grained quartzite, which they struck with hammers of stone or antler, each blow chipping out one small stone flake. The artists first outlined a figure and then, with immense patience and labor, pecked out the entire form. They may well have rubbed and colored the finished engravings with the earth pigment ocher, used by other rock painters, and today archaeologists have carefully traced the most important glyphs with a similarly colored, reddish paint to make them more visible.

The hunting and capture scenes are easiest to understand. One rock panel with 180 figures shows reindeer being herded into a pound or corral made of wooden stakes. The method was later used extensively by the Saami (Lapps), many Siberian tribes and some northern Indian tribes well into the twentieth century.

Another group of glyphs depicts hunters spearing swimming reindeer from open boats. The technique was the same employed until the 1950s by Canada´s Inuit. Using kayaks, the Inuit speared swimming caribou at traditional river sites where for untold generations migrating caribou had always crossed and the hunters had waited.

If the physical reality of the animals and of the hunting scenes can be understood, any religious meaning of the images remains largely inscrutable. To understand why, one can imagine a space alien encountering a Christian church for the first time: a large uninhabited building with strange paintings and a poorly clad man hanging from a cross. Without any knowledge of history, religion and the Bible, Christianity and its iconography are incomprehensible. 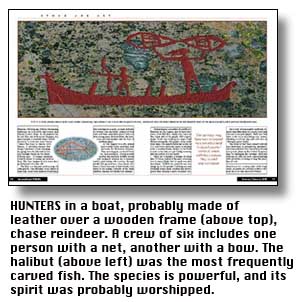 Archaeologists at Alta can speculate, however. "The site was holy and the images were imbued with magic," says Hans Christian Søborg, director of the Alta Museum. Not long ago, Søborg was making rubbings on a recently uncovered and cleaned granitic slope. As his graphite stylus slid back and forth across the paper, images emerged: a bowhead whale, several reindeer, a bear and bear tracks. "Since the bear is shown with tracks, it probably means this image represents a bear emerging in spring from its hibernation den and leaving tracks in the snow," Søborg says. "Its magic meaning could be linked to spring and resurrection. The bear images at Alta were also probably part of a bear cult."

The bear is a frequent motif among the Alta glyphs. One dramatic scene shows a bear hunt. Bears were hunted but probably also worshipped as gods, or more probably as totemic clan ancestors. Echoes of bear cults and bear veneration persist into our time among many Siberian tribes, the Inuit, some northern Indians and the Ainu of northern Japan.

At this rugged rock site, inland and coastal tribes probably met each year for thousands of years. They worshipped, no doubt traded, and gossiped. Young people courted and married (fertility scenes with pregnant animals are a common motif), and century after century, through nearly 200 generations, they carved pictures of their lives and of their beliefs, centered in the primal certainty of the basic spiritual oneness of humans and animals.

Archaeological excavation of coastal settlements in this region, and of their middens, show that fish, mainly cod, made up the staple diet of the people. Not surprisingly, boats and fishing are important themes among the Alta glyphs. Some boats were large (the largest shown has a crew of 32) and were probably made of leather over a wooden frame, similar to the Inuit umiak or the Irish curragh. Oddly, however, not one picture of a cod exists.

There are a handful of images of other fish. Of those, halibut is the most common, and it seems likely that its spirit was also worshiped. Halibut are powerful and can weigh up to 500 pounds. Catching one was evidently much more exciting and prestigious than landing a more everyday cod.

Each year, archaeologists cautiously remove vegetation from the coastal rocks and discover more petroglyphs. Each new find adds a bit more knowledge and understanding of a Stone Age past now seen as "through a glass, darkly."

The irony is that these ancient mirrors are threatened by present­day problems. Airborne pollution from factories in Russia and power plants in the United Kingdom may be damaging the carvings. Museum officials at Alta are now experimenting with protective coverings to keep the priceless art safe.

Fred Bruemmer, a roving editor of this magazine, specializes in covering northern subjects. He is an avid student of history.