Displaced over much of its range by hatchery-bred fish, the brook trout is now coming back to some eastern waterways 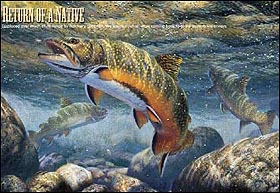 A YELLOW BIRCH LEAF catches my eye, spiraling downward into a quiet stream pool. For a long moment it lies perfectly still, as if stunned by its descent, then a tongue of current tows it into the main flow of water. Twenty feet away, standing calf-deep in a tiny feeder branch of Wilson Creek in western North Carolina, I cast a small fly just behind the leaf. It bobs through purling riffle water, through a small pool, and then into a tiny eddy under overhanging rhododendron. That's where the fish hits the fly and turns to surge toward the cut bank.

The rod dances in my hands. I gently guide the fish away from the tangle of rhododendron and into sunlit water, where its court jester's colors telegraph its species: a wild brook trout--a big brookie for these waters. "Nice fish," I say aloud, congratulating myself as I reach for a pair of forceps clipped to my vest.

A wild brook trout is a riot of color. Its flanks are speckled with red spots and blue halos, while yellow vermiculations squirm across its mossy green back. The belly of a brookie sports a stripe of orange, as if it had been dipped in a shallow pan of fire. In the hand the fish seems gaudy, a piscine peacock, but in the water it is nearly invisible against the sun-dappled stream bottom.

Members of the salmonid family--that large, much-lauded assemblage of trout, char, salmon and whitefish--brook trout are not true trout at all: They're char. Less specialized in their habitat needs than most of their kin--brookies can live anywhere from beaver ponds and tiny streams to huge boreal lakes and sprawling rivers--the fish range widely across the eastern half of Canada, Minnesota, Wisconsin and throughout New England and can occur as far south as the high Appalachian creeks of northernmost Georgia.

Adaptable as they are, wild brook trout face some formidable enemies. For the last 125 years, streams and ponds throughout the species' range have been stocked with untold millions of hatchery-bred brook trout, along with millions more nonnative rainbow and brown trout, pike, bass, catfish and other aliens. Such efforts have increased opportunities for fishermen, but with a price. In many waterways, the more aggressive nonnatives have elbowed brookies out of prime habitat. Bred to grow fast, live in crowded conditions and tolerate human contact, hatchery-raised brook trout displace the wild fish as well as breed with them, passing on domesticated qualities to native populations. In many instances, stocked fish have polluted local "strains" of brook trout whose unique genetic formulas have evolved over time in isolated waterways. Across much of the species' range, acid rain also has eliminated brookies from streams, lakes and rivers where they once were found.

Yet a handful of streams and ponds, in places as far flung as the Great Smoky Mountains and the forested Northeast, still shelter healthy populations of wild brookies--including unique genetic strains of these exquisite natives. In these waters, fisheries biologists are mounting heroic efforts to save the nation's last pure strains of native brook trout.

One of the most intensive projects is in Great Smoky Mountains National Park, a few counties west of my Wilson Creek fishing hole. Brook trout once swam in more than 500 of 735 fishable miles of the Great Smokies' creeks and rivers, but extensive logging in the late nineteenth and early twentieth centuries fouled hundreds of miles of these trout streams with silt and other runoff. In the decades since, more than 700,000 hatchery-raised brook trout (strains of New England trout) were stocked in the Smokies, along with more than a million rainbow trout, which grow larger and tolerate warmer and more sullied waters than native trout.

"Today, there are only 125 miles of park waters that hold native brookies," laments Steve Moore, the park's fisheries biologist. "Factor in the loss of high-elevation stream habitat to acid rain deposition, and it's urgent that we do what we can to save these native fish."

Here in the Smokies, and throughout the southern Appalachians, old-timers long maintained that these native "speckled trout" are a different fish from the hatchery-raised brook trout of the Northeast. Mountainfolk pointed to the fish's speckles, brighter spots, smaller size and longer fins, but scientists were unconvinced. 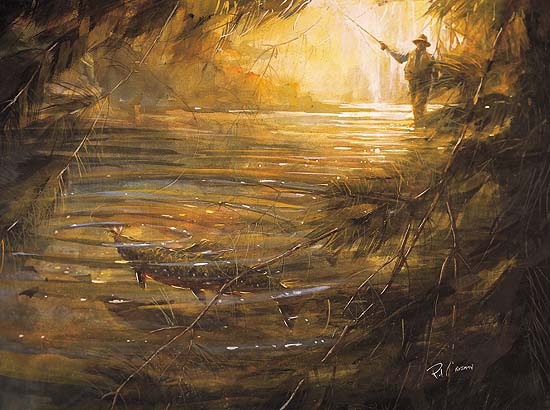 AN OFFER HE CAN'T REFUSE by ROD CROSSMAN ( WWW.RUSSELLFINKGALLERY.COM )

Then in the 1990s, genetic testing at the University of Tennessee showed that fish from unstocked Great Smokies streams were indeed genetically different from their northeastern kin. (Nine separate clusters of genes examined were distinct.) "It's a different fish altogether," says Moore. Since then, genetic analysis of North Carolina brook trout outside the park has identified some 50 additional populations as pure southern Appalachian brookies, with another 200 populations awaiting testing.

Whether these genetic differences qualify Appalachian brookies as a subspecies remains unknown. But Moore says the National Park Service is required to conserve all native plants and animals, which includes restoring native strains as well as species. For the last decade, he's led an intensive restoration program targeting six streams. Each summer, Moore and a small army of technicians hike up to these remote creeks and use pack-mounted electro-shockers to kill and remove nonnative fish.

Stream pool by stream pool, year after year, these workers have hand plucked more than 3,300 rainbow trout from the park's waterways. During last year's sweep through Lost Bottom Creek, 3,910 brook trout were tallied--nearly twice the number in the creek when the project began--with not a single nonnative fish. All told, the park service has restored nearly eight miles of prime brook trout habitat.

Now Moore plans to take the project to "the next level." Electro-shockers are successful only in small bodies of water, he says. Yet getting native fish into lower, larger streams is crucial to buffering populations against stream chemistry changes. In a pilot program this fall, park service workers will use the antibiotic Antimycin A, which kills fish, to eliminate nonnatives from a two-and-a-half-mile stretch of Sam's Creek.

Though Moore had braced himself for a firestorm of opposition to killing nonnative fish, public support for the project has been strong. "The park service made a good case," says Bob Gale, an ecologist with the Western North Carolina Alliance, a local environmental group. "We generally look favorably on efforts to restore native fish."

To bolster such support, Moore points out that "Antimycin works in parts per billion," and that similar projects in western rivers have caused no long-term harm to organisms such as snails, mayflies and crayfish. To protect fish and other animals downstream of Sam's Creek, biologists will apply a neutralizing agent to render the water safe again.

Several hundred miles north of Sam's Creek and other Appalachian waterways, brook trout habitat can look quite different. Though brookies are common in New England's swift-running mountain streams, they also share the still waters of lakes and ponds with creatures such as moose and loons. In Maine, brook trout live in nearly 1,500 lakes and ponds, 424 of which have never been stocked; a recent survey of the state's lakes found that trout populations in all the lakes remain genetically unique. Several New Engl and states are protecting these native fish through strict fishing regulations.

But in New York--where the brook trout is the official state fish--fisheries managers must take a more aggressive approach. Like their southern kin, Adirondack brookies have long struggled against interlopers. For some 200 years, hatchery-raised trout and nonnative fish such as yellow perch and bullhead catfish have been dumped into the region's 3,000 lakes and ponds. "Brook trout are ill-equipped to compete with these species," says Leo Demong, a fisheries biologist with the New York State Department of Environmental Conservation. "The native fish have really suffered."

To give Adirondack brookies a boost, Demong's department spearheads a pond- restoration program. Using fish pesticides, workers remove all fish from targeted lakes and ponds, then restock them with brook trout. They've already restored 50 water bodies, totaling nearly 1,000 acres, and eventually hope to restore 1,000 additional acres through a combination of chemical reclamation and "liming"--adding lime to neutralize the effects of acid rain. Another goal is to restore some wilderness waters for genetically pure populations. Scientists have identified as many as nine different "heritage strains" of genetically pure Adirondack brook trout, each of which occupies a particular lake or pond system.

Of course, reclaiming local waters for native fish means killing the nonnatives, and the use of fish pesticides "has not been without controversy," admits Demong. "But perseverance from our supporters has paid off." He says research conducted by his department demonstrates only short-term harm to zooplankton and bottom-dwelling invertebrates and just minor mortality among insects such as dragonflies and damselflies. "The bottom line is that there's no equal for restoring native populations of brook trout," says Demong. "Wild native strains are a part of Adirondack heritage."

And a part of southern Appalachia's heritage as well. Back in my Wilson Creek fishing hole, I carefully cradle the wild brookie in my left hand and gently remove an elkhair caddis fly from the corner of its mouth. The fish is in its fall spawning colors, each vermilion spot and azure halo electric in intensity. With their requirements for pure, cold water, brookies depend on ecosystems nearly as intact as do the largest terrestrial predators. Like a wet bear print on a dry creek stone, the presence of wild, stream-bred brook trout authenticates the southern Appalachian wilderness.

I let the fish slide through my fingers, and in an instant, it slips beneath the water's surface and disappears. To my eyes, anyway.

Working with scientists at the American Fisheries Society, NWF is part of a joint effort to assess the effects of climate change on native fish. (To learn more, see www.fisheries.org.) In a recent report, NWF identified the brook trout as one of several species that are highly vulnerable to power-plant pollution. (See Global Warming.)