In bequeathing territory to daughters, solitary leopards provide a glimpse into how social groups evolved 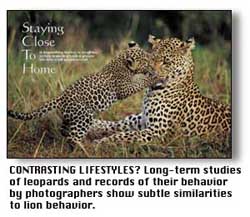 Londolozi Game Reserve, South Africa:
A 13-year-old leopard called The Mother gives birth to her ninth litter. At the same time, her adult daughter from an earlier litter delivers cubs in a den near her birthplace.

Masai Mara National Reserve, Kenya:
A 10-year-old female leopard named Half Tail roams a territory that overlaps with that of her adult daughter Beauty. Zawadi, another daughter from a more recent litter, lives just to the north.

Until recently, researchers delving into the lives of cats assumed that neighboring leopards were just that - neighbors. Now, they're discovering, there is more to these neighbors than meets the eye: In many cases, the females in an area turn out to be related, sometimes just as closely as lionesses in a pride.

Ordinarily, young mammals leave home when they become adults and move away to find a home range of their own. The process is called dispersal. But in leopards and many other mammals, the scientists are learning, newly independent daughters often carve out a home range from a portion of their mother's range or squeeze in next to her. The name for this stay-at-home behavior is philopatry, a term derived from the Greek for "home-loving" and loosely defined as the tendency of an individual to remain in its birthplace as an adult. 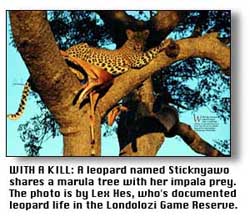 The behavior is easy to see in lions, which travel together on open savannas where they can be observed by researchers. But as scientists complete long-term studies of other, more secretive mammals, they are finding some of the same dynamics. And so are wildlife photographers - including Lex Hes and Fritz Pölking, whose pictures on these pages, from South Africa and Kenya respectively, help to record two leopard family trees not unlike those of lions.

Philopatry is actually not uncommon among mammals, says Peter Waser, a professor in the Department of Biological Sciences at Purdue University, but it is difficult to confirm. Scientists have now identified the behavior in tigers and other "solitary" cats, as well as in other mammals (see "Daughters and Moms: Staying Near Home," below). Their research problem is one of access over time. "People tend to accumulate one or two examples in a long-term study, but these observations are usually too few to publish in scientific journals," says Waser.

One exception is a long-term review of black bears by Lynn Rogers, a retired U.S. Forest Service biologist. Rogers' research in Minnesota involved following nearly 100 bears, all equipped with radio collars and ear tags, for more than 16 years. He discovered that as young female black bears become independent, their mothers essentially "give" the daughters a portion of their ranges.

By allowing her daughters to use her range, a mother black bear provides her offspring with an opportunity to forage in a good area and protects them from aggressive encounters with other bears. Knowledge of a feeding area, Rogers suggests, is very important for bears (starvation was the main cause of death for cubs and yearlings he studied). Young bears must be able to find widely scattered berry patches and other ephemeral food sources, and they may do so by remembering where they fed with their mothers when they were cubs.

The advantages of staying close to home vary for different species. Basically, however, the rationale boils down to familiarity: Remaining in a familiar area is safer than leaving. For young three-toed sloths, for instance, the motivation is familiar food. The sloths inherit the ability to detoxify and digest leaves of specific trees. They learn the location of those trees as they travel around with their mothers. When a young female becomes old enough to travel on her own, the mother bequeaths her a portion of her home range.

Familiarity can also increase a young female's chance of breeding successfully. Among leopards - whose cubs are regularly killed by lions, hyenas and even male leopards - knowing where to find safe den sites can mean the difference between life and death. Secure den sites such as rock crevices and caves, or tunnels beneath tangled tree roots, are vitally important refuges for young, which must be left alone for many hours while their mothers hunt. Young females learn the location of these safe dens while they are growing up and often give birth in den sites where they themselves were born. 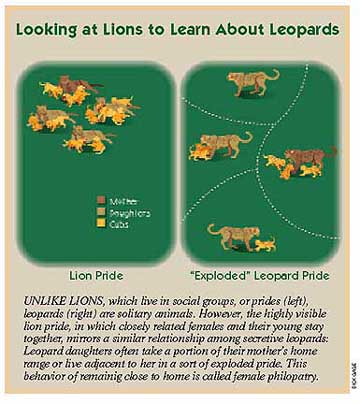 For all the interest in leopards, Waser thinks philopatry may turn out to be more common in species such as beavers, wood rats and kangaroo rats - animals in which females make large investments in their ranges. "Kangaroo rats live in large mounds that take months to build and may contain up to six kilograms of stored seed. New mounds are rarely built," he says. "Juveniles often inherit a mound from their mother."

No matter what the advantages, the outcome of staying is the same: a cluster of closely related females. Waser believes these female kin groups provide insight into socialization. When you try to imagine how social groups evolved, the first step was probably the retention of adult young, he says. The next step would be a set of circumstances that would favor the formation of groups, such as increased hunting efficiency or improved survival of young. 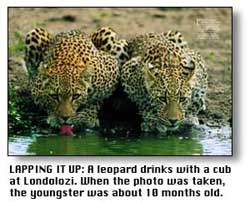 These advantages are probably at the root of cooperative behavior in wolf packs, mongoose packs, hyena clans and lion prides. In the case of solitary leopards, clusters of closely related females can be viewed as a sort of exploded pride, where neighboring leopard females are as related as lionesses in a pride.

For photographers willing to document the phenomenon, all it takes is patience. In Londolozi, photographer Hes followed one female leopard off and on for 12 years. And in the Masai Mara, Pölking shadowed another female for nearly a decade.

Daughters and Moms:
Staying Near Home
Leopards are not the only mammals in which daughters live close to their mothers. Female black bears also allow daughters to use their ranges. Deer travel in small bands consisting of mothers, their grown daughters and fawns. Many female primates remain in the groups where they were born, and bush baby mothers share ranges and nests with grown daughters.

Among the species in which female philopatry occurs: