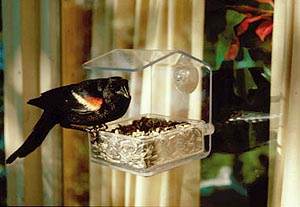 AVOIDING PANE: Attaching feeders to
a window guarantees that birds, such as
this red-winged blackbird, will not crash
into the glass at top speed and die.
Closing the drapes at certain times also helps.
FOR MORE THAN 200 BIRD SPECIES that make a migratory pit stop or permanently reside at the U.S. Fish and Wildlife Service's Patuxent Wildlife Research Center in Maryland, the 12,750 acres of forest, meadow and wetland is a welcome oasis in a sea of East Coast concrete. Flitting and swooping from one tree to another, the birds delight biologists and visitors alike, filling the air with song. Then comes the thud.

Lured by the leafy reflections on the windows of a dozen buildings at the refuge, birds--unable to perceive glass as an obstacle--see a clear passage, and rushing forward they smash against the transparent barrier. Some die. Others drop to the ground, stunned. "Window strikes are a problem here for a whole range of species from hummingbirds to hawks," says Heidi Hanlon, a wildlife biologist at the refuge. The problem at Patuxent is not unique.

For more than a century, human-built structures have posed serious hazards to birds. More recently, a proliferation of radio and television towers have added to the migratory birds' plight. In foggy weather and for unknown reasons, aircraft warning lights confuse them, lure them in and cause them to circle until they either collide with the tower or one another or drop from the sky in exhaustion. Equally treacherous are the collisions that occur when birds mistake the reflection on the windows and glass walls of skyscrapers for real sky. In Chicago, for example, experts estimate that any single, tall building could be killing 2,000 birds a year during peak migration.

But as Hanlon knows, window strikes are not solely the problem of tall buildings and communication towers. For birds, windows on residential homes or similar squat buildings can be just as deadly. In fact, daytime window collisions with low-level structures account for anywhere from one hundred million to one billion bird fatalities--of both migrant and resident species--in the United States each year, according to Daniel Klem, a professor at Muhlenberg College in Pennsylvania. His research has also shown that these collisions occur during all seasons, all times of day and with windows facing any direction.

These numbers are astounding, yet often people don't even notice the birds dying beneath their picture windows. "Birds that are injured or dead will be scavenged a majority of the time," says Michael Mesure, program director for the Fatal Light Awareness Program (FLAP), a Toronto-based group formed in 1993 to document and raise awareness about the bird and window-strike phenomenon. "Birds that fly away can also later die of their injuries. Many times they have broken beaks, which makes foraging impossible, or they die from a brain hemorrhage."

The long-term solution is to design glass that is less reflective, says Mesure. But getting people to accept such a material will be hard: Corporate directors prize the powerful look mirrored glass brings to a skyscraper, and many home owners prefer their windows gleaming and spotless.

As one solution, Mesure and Hanlon are looking at an opaque window film designed by 3M that allows people to look out of but not into a window. Currently, it's not available to the public and only being used to place advertisements over bus and taxi windows. Mesure became convinced it could save birds' lives after he experimented with it on his own problem window at home. Not a single bird has hit it in the five years since. "The problem may be that people won't be able to get around how different it looks," says Mesure.

While waiting for a long-term market solution to appear, home owners can take some steps now to minimize the danger that windows pose to birds. One tactic is to ensure that the birds aren't flying at full speed when they hit. Many times window strikes occur after a scare from the neighbor's cat or a hawk scatters the birds at a feeder in all directions. House plants hanging on the inside or vegetation reflecting from the outside may mislead a hapless bird into thinking the area is a passage to safety. But if feeders, baths and other bird attractants are placed three feet or less from the window, no matter how fast the bird takes off, if it hits the window it will bounce to the ground, dazed but alive. (To help a bird while it recovers place a colander over the bird and weight it down so that it can't be tipped over by a predator.) A feeder placed more than twelve feet away will mean that 50 percent of the birds that hit will probably die, according to FLAP.

If it's not possible to remove or relocate bird perches, home owners can cover nearby windows with netting, especially during peak migration periods. But this can get tricky. "Soccer-grade netting is best but it must be stretched taut so that birds don't get caught," says Mesure. "If they collide it will act like a trampoline and bounce them to safety." An old storm-window screen hung outside the window will also work well.

Sometimes people place falcon, owl or spiderweb decals on their windows, but these tactics rarely work. "When effective the decals become impractical, as they'd have to cover 80 percent of the glass," says Mesure. When using silhouettes, he recommends hanging them by chain or rope from an overhang so that they will stand out more by blowing in the wind. "Birds aren't dumb," he says. "A resident bird will soon learn that the silhouettes are just objects that pose no threat. Unless you move them around they won't work."

An alternative is to use interior coverings such as blinds and curtains. If you live in a high rise, this works well to warn birds on nighttime flights. For residential home owners, this will only make a difference when the sun is shining directly on the window; if it's darker on the inside of a window than on the outside, the pane will reflect like a mirror. A few dead branches in front of a problem window may help. The branches will reflect, but they'll also slow the bird down a bit. Planting a shade tree or some shrubbery will serve the same purpose, as will an awning.

FLAP also recommends hanging streamers of shiny, reflective plastic ribbon or strips of black garbage bags in front of problem windows. "Anything that glitters and moves in the breeze will help prevent a bird from colliding with a window," says Mesure, who also advocates freeing up time for bird-watching by letting windows get grimy. "Don't clean them. The dirtier the window, the less reflection and the more birds will see it as a solid object."

Mesure admits that today's solutions are limited and not particularly aesthetically pleasing. It's an issue he'll continue to address. Right now his first priority is getting people to recognize windows as deadly obstacles that threaten declining bird populations. "People see one or two birds occasionally hit their window at home and it doesn't look like much," says Mesure. "But multiply that by every house on your street, in your neighborhood and then all across North America and you have millions of birds dying. We've got to do something."

Heidi Ridgley is an associate editor of this magazine.