Few people realize that native bees are crucial to the ecology and the economy of the United States; Frank Parker and others are trying to change that 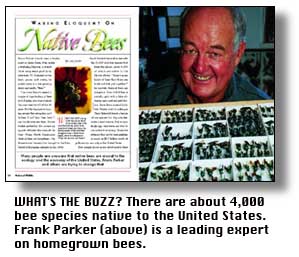 Frank Parker stands near a trailer court in Green River, Utah, under a sweltering May sun. A stone's throw away, semis grind by on Interstate 70. Unfazed by the heat, grime and noise, he points down to a low-growing shrub and exults, "Bees!"

I've come here to spend a couple of days looking at bees with Parker, who has studied the creatures for 41 of his 64 years. But the tiny specks dancing around this astragalus can't be bees: I can't hear them buzz. I can hardly even see them. Parker smiles patiently. He comes up against attitudes like mine all the time. Many North Americans think all bees are honeybees--the domesticated buzzers first brought to the New World by European colonists in the 1600s.

Frank Parker's fascination lies with the 30,000 wild bee species that buzz the planet, about 4,000 of which are native to the United States. "There's more kinds of bees than there are birds and fish put together!" he marvels. Some of them are gorgeous: One orchid bee is metallic gold with a blue abdomen and a red and gold thorax. Some have unusual habitats: Parker and his colleague Terry Griswold found a female of one species that dug nine feet under a sand dune in Utah to lay a single egg. And some are vital to our nation's economy: Scientists estimate that native bees perform as much as $6.7 billion worth of pollination annually in the United States.

Few people know more about native bees than Parker. An inveterate collector known to colleagues as "Bring-‘em-back-on-pins Parker," he has found hundreds of new bee species in the United States and Latin America. During his 20 years as head of the U.S. Department of Agriculture's Bee Biology and Systematics Laboratory in Logan, Utah, he found that the state is an Eden for bees. A key part of that Eden is near here, in the San Rafael Desert.

On his way home from a fishing trip in 1977, Parker first stopped in the San Rafael and pulled out his collecting net. He bagged hundreds of specimens that day, many of which he had never seen before. Subsequent trips with his staff revealed that at least 331 bee species live here, 69 of which don't occur anywhere else. Mile for mile, this area is as rich in endemic bees as Costa Rica.

We drive to the San Rafael. Rabbitbrush, sage and juniper trees grow on gravel shoulders that undulate to the foot of sandstone formations. Parker explains that species from several ecosystems converge here--Chihuahuan, Sonoran, Rocky Mountain and Great Plains. Although he and others have been studying the area for more than two decades, much of it is still a mystery.

"There's many species we have one specimen of," says Parker. "We found a Stelis parasitic bee on Flat Top Mountain. One specimen! Is it endangered?" He shrugs.

We park the car, and Parker strides into the rabbitbrush, distributing plastic picnic bowls he's filled with soapy water to trap bees. He'll set out about 300 of these. Afterwards, we visit the site of a bee species with a unique home. Thousands of a recently discovered species of mining bees have chewed their way about nine inches into the side of a sandstone wall, making it look like an enormous sponge.

"Does this species sting?" I ask carefully. 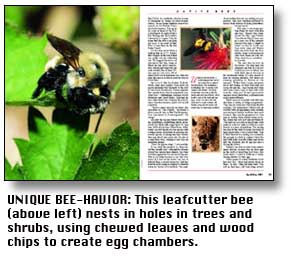 To my relief, the answer is no. They can, but they usually don't. Although the females of most bee species have stingers, bees tend to be less aggressive the less social they are. This is probably because a bee that lives alone in a hole in the desert has less to defend than a social honeybee that has invested all its energy in helping to maintain a hive for 50,000 of its brethren. The sandstone-nesting bees we are seeking are gregarious (they nest together, probably to reduce their chances of being parasitized) but not social.

Not only do we escape getting stung, we don't even find any bees. "Maybe they abandoned the site," says Parker. "Sometimes they'll leave and get a new site if the parasite load gets too high. It might've been too dry in April and they never came out. Maybe they can sense how dry it is. Maybe some environmental cues turn them on and off. They must be so sensitive," he marvels.

The next day we look in the bowls. The ones near our campsite are full of Andrena lindsleyorum--a black bee with black tips on the end of its translucent wings. It's only known to feed on evening primrose, but there's no evening primrose in bloom at the moment. "Either there's some primroses we're not seeing, or these bees will just come out and die," says Parker. But some wild bees have a way to deal with such scarcity: Only part of each generation emerges at any given time, a phenomenon called parsivoltinism.

Parker goes on to explain that wild bees also have a variety of living arrangements. They may be social like their domesticated cousins, the honeybees (which live in colonies with an egg-laying queen, sexually undeveloped female workers and male drones), they may be gregarious or they may be solitary. Each solitary female is fertile, makes her own nest and provisions it. This nest can be a hole in the ground, a hut made of resin and sand or a hole in a dead branch or a piece of sandstone. The carding bee uses its tiny teeth to scrape the stems of hairy plants until it has a ball of fuzz. Then it takes the fuzz to a nesting site--a hole in the ground or a hole in a plant--lines the hole with fuzz, deposits pollen and nectar into the chamber, lays its egg and adds a closing lid of fuzz.

Parasitic bees live an even lower-maintenance lifestyle. Because they lay their eggs in the nests of unwitting host bees, they don't need to invest in building or maintaining shelters for their eggs.

Parker points to a dead sunflower about five feet tall. "Bees and wasps sleep on these," he says. "They just hang there. They roll up their legs, pull their wings around them, and just spend the night. They look like berries."

Parker's knowledge of and enthusiasm for native bees are rare--and getting rarer. He's been retired for seven years, and many of his peers are retiring without being replaced. ("It's an old field," says Parker. "It's not new technology.") Not much money has been applied to studying native bees, either--of the five federal bee labs in the country, four are devoted to honeybees and one, the lab in Logan, to native bees. 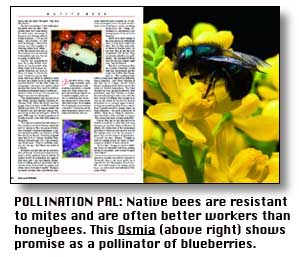 Native bee populations may be doing better than those of the scientists who study them. But because scientific attention has been so thin, it's hard to know for sure. Scientists know that some wild bees thrive in disturbed areas because new plants move in and provide new bee habitat. On the other hand, development can wipe out native plant species that some bees need to survive. Booming development in the Southwest--around cities such as Tucson and Las Vegas--worries bee aficionados.

One disappearance may already be in the works around rapidly growing St. George, Utah. There the dwarf bearclaw poppy, which has been on the Endangered Species List since 1979, may go extinct due to habitat loss and off-road vehicle use, according to federal biologists. When it goes, Utah may lose its last population of Perdita meconis, a bee that feeds largely on the poppy.

The only documented bee extinctions in the country occurred in Hawaii, which has lost 12 species of the bee genus Hylaus, says ecologist Stephen Buchmann, a former federal scientist and founder of The Bee Works in Tucson. Similarly, England once had 25 to 27 species of native bumblebees, but now only 5 to 7 are common, says Buchmann. "They're definitely winking out," he says. "But there's not much of a census."

If native bees live and die in obscurity, the problems of domesticated honeybees--which perform tens of billions of dollars worth of pollination for agriculture each year--are well-known. Honeybees are falling victim to pesticides and to varroa mites, which feed on pupae, and other mites that infest adults' tracheas. Scientists estimate that domesticated honeybee numbers have declined by 25 percent nationwide over the past decade. And in the Southwest, many surviving honeybees are being hybridized by Africanized bees sweeping north from Latin America.

Native bees don't belong to the same species as Africanized bees, so they don't mate with them. Nor are they vulnerable to varroa or tracheal mites. So can they take up the slack for honeybees? Yes. In fact, they are already valuable crop pollinators. "The demand for these bees far exceeds supply right now," says Buchmann.

This isn't just because they are disease-resistant. Some wild bees can pollinate specific crops much better than honeybees do. "The sunflower leafcutter is much more efficient on sunflowers than a honeybee," says Vince Tepedino of the bee lab in Logan. About 5,000 female sunflower leafcutters can do the work of 50,000 honeybees. The blue orchard bee is an "incredibly effective" fruit pollinator, says Phil Torchio, a former federal entomologist who now sells the bees. About 250 female blue orchard bees can do the work of 30,000 to 40,000 honeybees on a one-acre apple orchard. And ground-nesting alkali bees--which have a pearly-green to orange band on their abdomen--are good pollinators of alfalfa. "They are so cheap to maintain," says Jim Cane of the bee lab in Logan, "they come darn close to a free pollinator."

Parker was one of the discoverers of Osmia sanrafaeli, a native bee that may become yet another viable pollinator of alfalfa. He's well aware of the commercial potential of wild bees. But he isn't in it for the money--he's in it for the wonder. I press him on the subject of agriculture. "Oh yes!" he says. "Money." I might as well be talking about the value of landscapes as subjects of desk calendars.

"Is it so bad," he says, as one of a declining breed of scientists that likes poking around in the desert, "just to want to know what's here?"

Lisa Jones recently moved from Colorado to Vermont, where she now works as a reporter for the Burlington Free Press.