Attracting Aerial Acrobats to Your Yard

A small pond, coupled with the right habitat conditions, will help you attract dragonflies and damselflies to your garden 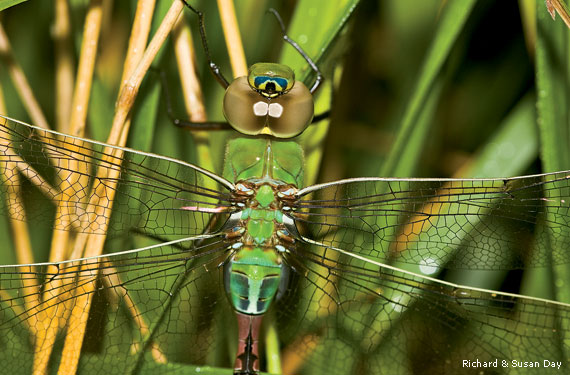 WHEN HER KIDS went off to college, Kathy Biggs got rid of her backyard swimming pool. But her Sebastopol, California, yard still buzzes with activity on warm summer afternoons, because Kathy replaced the pool with a dragonfly pond. Now, instead of kids cannonballing off the deck, she watches cardinal meadowhawks diving after mates and emerald spreadwings basking in the sun.

Dragonflies and damselflies belong to the insect order Odonata, and most members of this group rely on water throughout their life cycle. The juveniles, or nymphs, live underwater for months and sometimes years before emerging as adults; the adults tend to hunt for insects over water and lay their eggs in water or on adjacent vegetation. Under the right conditions, even a small pond will attract some of these aerial acrobats to your yard.

If you enjoy bird-watching, you'll probably love watching dragonflies. Their bodies tend to be larger, with broader wings, than those of damselflies, whose wings taper at the base.

Like birds, dragonflies are reasonably easy to identify by their field marks. Close-focus binoculars will help you get a better look. And like birds, male dragonflies are usually territorial and defend their turf aggressively. (No wonder they were a favorite emblem among seventeenth-century Japanese warriors, who called them "invincible insects.") Dragonflies resemble red-winged blackbirds or flycatchers in the way they claim an elevated perch on a stem of marsh grass, then sally out to chase away other males or make a mid-air capture of a mosquito.

During certain times of year, you'll also see what Arizona State University researcher John Alcock calls "the most striking and entertaining dragonfly behavior": mating in midair. Watch for two dragonflies in the "wheel" position, which means they're in the process of mating, or for damselflies flying tandem, like a car pulling a trailer (the strategy enables males to guard their mates during egg-laying).

Building a Pond for Dragonflies and Damselflies

"Before digging a pond to attract dragonflies, consider whether you live within a few miles of an established population," says Michael May, a Rutgers University entomologist who is president of the Dragonfly Society of the Americas. "You'll get faster results if you do."

Unless you live in the arid Southwest, your yard may be reasonably close enough to a stream, pond or wetland with a "source" population. Dragonflies are strong flyers, though most individuals stay around their natal pond or stream. "But a certain number 'float' through the landscape," says May. That often means, if you build it, they will come.

The next consideration is size. "My pond is about 20 feet in diameter," says Biggs. That's approximately the size recommended by the British Dragonfly Society. (The British have dragonfly clubs the way Americans have birding clubs.)

Many garden stores now sell stiff, pre-shaped plastic ponds, as well as flexible PVC or butyl rubber liners that will conform to the shape of a pond you design yourself. If you use a flexible liner, a layer of newspapers or old carpet under the plastic prevents punctures.

You don't necessarily need a large pond to attract dragonflies. "I've got friends whose 'pond' is a wooden half barrel," says Biggs, "and fork-tailed damselflies still come and breed in it. One of my grad students reared damselflies in plastic wading pools." Whatever the size, place your pond where it will be protected from wind and will get midday sun.

Craig Tufts, chief naturalist for the National Wildlife Federation, is well qualified to comment on the proper parameters for dragonfly ponds; he helped oversee the construction of two ponds last year. One is a centerpiece of the natural garden in front of NWF's headquarters in Reston, Virginia; the other is located several miles away in his backyard, which happens to be near a sewage treatment plant that attracts a lot of dragonflies.

Tufts says the ideal dragonfly pond should vary in depth, shallow at the edges and at least two feet deep in the center. "Deep water offers nymphs a refuge from raccoons and other predators," he says. "Varied depths are also important to accommodate a variety of water plants." It's not that the nymphs or adults eat the plants. (Dragonflies are voracious carnivores.) Rather, underwater plants provide important habitat for the nymphs, which need places to rest, hunt for food and hide from predatory fish. And emergent vegetation—sedges, rushes and other plants that stick up above the water's surface—provides perching places for adults.

Such vegetation is also critical for dragonflies because the nymphs crawl up it when they emerge, making the transformation from water dweller to their free-flying adult form. And though dragonflies don't rely on specific host plants to nourish their young the way butterflies do, some species do use water plants as nurseries. They insert their eggs into the soft stems.

What you plant around the pond is almost as important as what you plant in it. Don't mow the border—let the grasses and rushes grow. "Make sure you have some shrubs within a few feet of the water," says May. "That will provide more perching sites." In many areas, lobelia, buttonbush and seedbox are good choices for your pond's edge.

Don't disturb wild habitat to stock your pond with plants. Many garden shops and catalog suppliers now sell all kinds of plants for water gardens. Look for species native to your area.

One last design detail: Put a few flat rocks near the pond's edge. "Dragonflies like to warm up by basking in the sun," says May. "Some species are attracted to light-colored rocks."

It can take a while for pond plants to get established. While you're waiting for your emergent vegetation to grow above the surface of the water, Tufts recommends putting a few perching sticks in the middle of your pond. Ordinary bamboo stakes—the kind you use to stake tomato plants—will do the job.

If you want breeding populations of dragonflies in your pond, it's probably best not to introduce fish, because they will prey on the nymphs and eggs.

Although experts say that about 15 percent of North America's 307 dragonfly species are in danger of extinction, the dragonflies at greatest risk for extinction are the stream dwellers, species that won't be attracted to your backyard pond. "You can help protect their habitats by supporting laws and practices that reduce water pollution and protect riparian areas," says Tufts. "You'll be helping a lot of other creatures in the process."