The successful, dramatic recovery of Robbins' cinquefoil is an example of the power of federal/private partnerships to benefit imperiled plants, fish and wildlife. 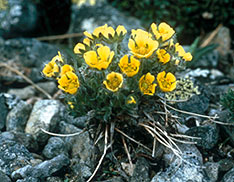 Often the news about imperiled wildlife is discouraging, but occasionally there's a success to report. The latest good news: a rare plant has been removed from the U.S. Endangered Species List.

The Robbins' cinquefoil (left), a small, yellow-flowered perennial, is found only in the upper reaches of the White Mountains of New Hampshire. Less than 4,000 of the plants remained before the species was listed as endangered in 1980, and its main population was threatened by plant collectors and hikers on the nearby Appalachian Trail.

In 1983, government officials and representatives from the Appalachian Mountain Club rerouted the trail away from the plant's habitat. Later, with help from the New England Wild Flower Society, biologists created two additional populations of the cinquefoil in other locations in the White Mountain National Forest.

Today, more than 14,000 Robbins' cinquefoils grow in the White Mountains, and the species was officially de-listed in late August. "The successful, dramatic recovery of Robbins' cinquefoil is an example of the power of federal/private partnerships to benefit imperiled plants, fish and wildlife," says Mamie Parker of the U.S. Fish and Wildlife Service.