Summer in the Land of Ice

In Antarctica, the shortest season is also the busiest time for wildlife 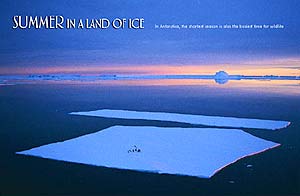 THE SUN is blazing on a glittering, crystalline realm of ice deep in the Weddell Sea of Antarctica. Seemingly out of nowhere in this vast expanse, a group of rotund emperor penguins appears, tottering along on short legs. They are soon followed by another small band of the birds, and then another. Intent on reaching their destination, the creatures all flop down onto their shiny breast feathers and speed up the pace by tobogganing, paddling with flippers and feet on the snow. They continue in a long snaking line weaving between huge ice mountains until they disappear from view. These penguins are in a hurry.

It is midnight on December 21—the beginning of summer—some 200 miles beyond the Antarctic circle. While people living in many areas of the Northern Hemisphere are huddling in cozy homes, spending long, dark evenings preparing for the holidays, the opposite end of the Earth is a world now flooded with constant daylight. And just as northern wildlife has settled into its lowest gear for the winter, in these far southern reaches the tempo of life is in full swing. It is a brief season of exuberance when everything happens very fast.

The emperor penguins are rushing because they have to feed their chicks, which depend on one last provisioning by their parents for survival before their world literally falls apart. The very "ground" they are traveling over is actually the frozen sea surface, and the ice mountains are gigantic icebergs still trapped by the freeze. But now the entire assemblage is splitting and melting, and in a few more days there will be nothing left here but a cold, iceberg-studded ocean with penguins and whales gorging themselves on the marine riches flourishing in the brief summer. The chicks were hatched during the depth of winter and raised in time to start life on their own just as summer reaches its peak.

Antarctica is a place of mind-boggling records and extremes, most of them relating, directly or indirectly, to ice. It is the world’s fifth largest continent, but without all of the ice that smothers it, the remaining land would seem so insignificant we may hesitate to call it a continent at all.

Unlike the Arctic, which is an ocean surrounded by land, the Antarctic is a landmass surrounded by water. It is the driest continent on Earth, with less than one inch of annual moisture precipitating out of the freezing air over much of the interior; and, on average, the highest, thanks to ice layers more than 15,000 feet thick. It is also the coldest continent, with temperatures recorded down to minus 129 degrees F, and the windiest, with icy blasts regularly raging more than 200 miles per hour in places. Its frozen mass holds around 90 percent of all fresh water on the planet, and each winter it nearly doubles its surface area as a frozen girdle of solid sea ice extends outward from its shores.

It would be easy to conclude that in such an unimaginably hostile place, no living organisms of any sort could possibly subsist. Yet around Antarctica’s shores—defying the constant 29 degree F sea temperature—a riot of life follows the sunshine southward as it creeps toward the bottom of the globe in the wake of long months of total darkness.

The process begins with the springtime sun rays flooding through the sea ice and nurturing colonies of hardy ice algae that grow between spongy layers of accumulated snow. Within weeks, when the sea ice breaks up with the summer thaw, this algae is released into the sea as a thick soup that feeds enormous numbers of shrimplike krill and other minute invertebrates. Soon penguins, seals and whales—all air-breathing and therefore dependent on gaps in the sea ice as they swim—follow ravenously.

With the sun no longer sinking below the horizon, the Antarctic summer has reached high gear. Millions upon millions of warm-blooded creatures, from tiny storm petrels and mighty blue whales to boisterous penguins and stealthy leopard seals, make up the throngs. They push southward as far as they can go through the maze of channels and mosaic patchwork of shifting, drifting, disintegrating ice floes, all in pursuit of explosive summer food production. The feverish pace heralds one of the shortest food chains on Earth, passing from the bottom to the top of the chain in only three or four links.

For most animals of the Antarctic, this time of plenty is also their one chance to bear young and raise them to independence before the onset of another harsh, dark winter. All around Antarctica breeding activity takes on a great sense of urgency, telescoped as it is into that compressed window of plenty. Adélie penguins dispute sparse ice-free ground to hatch and raise their chicks along some of the most forsaken stretches of shoreline. Flying hundreds of miles farther inland in search of rocky outcrops protruding from the ice cap, Antarctic and snow petrels likewise flock to lay their eggs, while elegant pintado petrels choose small islands offshore. Preferring the less ice-choked waters of the more northerly Antarctic Peninsula, chinstrap and gentoo penguins are in search of good nesting sites, too.

For their part, seals generally take care of pupping on the ice very early in the spring, so that their weaned babies can make good use of the plentiful marine life to fatten up. And great whales—from humpbacks and sperms to minkes and blues—migrate down from the Tropics just to feed. They will later return north to warmer waters to calve.

In all, this ice-bound festival of life lasts but a short 12 weeks or so before the sun dips below the horizon again and a thin new frozen film on the sea surface presages the deep freeze about to return. Soon, a vast mass exodus will occur as most species head north again to escape the ice’s rigid clutch. Only a few will remain, such as the deep-diving Weddell seals that take refuge in the relative warmth of the sea to escape low air temperatures. They are adept at gnawing the ice to maintain breathing holes.

While all their congeners will be heading north to warmer climes along the edges of frozen seas, the majestic emperor penguins will choose the onset of winter to begin a new breeding cycle. The only birds in the world that may spend a lifetime without ever touching land, they alone will settle on the firmly frozen sea ice surface to hatch their eggs during the darkest months of winter. Here they will raise a new batch of chicks just in time for the arrival of another summer bonanza along the fringes of the ice continent. Nowhere else on this planet is life so finely balanced with the cycle of the seasons as it is in Antarctica.

Photojournalist Tui De Roy once sailed all the way around the Antarctic continent on an icebreaker, following the fleeting summer season.