Night of the Caimans

Under the cloak of darkness in the world's largest wetland in Brazil, the author experiences a chilling feeding frenzy 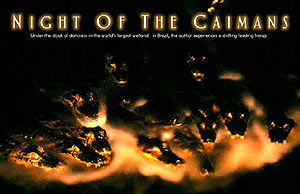 EVER SO SLOWLY, unblinking red eyes glide along the silent black surface of the tropical swamp, like faintly glowing embers in the penumbra of dusk. Then, without warning, Clop! Massive toothy jaws snap shut—the sound of an ancient reptilian dinner.

Deep in the steamy interior of southern Brazil, the night belongs to the caimans—and to the mosquitoes that are targeting this fair-skinned photographer, trying to stand still by her tripod. This is the Pantanal, a 40,000-square-mile, land-locked basin that makes up the world's largest wetland ecosystem. Much of this area is flooded during the six-month rainy season from October to April, when its waters give birth to the mighty Paraguay River that empties into the Atlantic. Also hailed as the most wildlife-rich wetland in the Americas—and arguably on the planet—it is home to everything from tapirs, jaguars and giant otters to snail kites and jabiru storks. But none of the Pantanal's wildlife has as colorful—and checkered—history as the caimans.

Six of the world's 21 species of Crocodilians are found in South America. The Paraguayan, or common, caiman is a smaller relative of the American alligator, reaching a length of ten feet at most. It is the widest ranging of the South American species; today, hundreds of thousands of the animals are found in the Pantanal. This was not always the case, however.

Like the rest of the crocodile clan, the caiman has been heavily hunted by poachers for its hide. But the lowest point for the species came more recently than for most others because its smaller size and excessively bony skin made it less desirable to tanneries producing fancy leather goods for world markets.

Fifteen years ago, even after protective legislation was passed in Brazil and international regulations were implemented to control trade in caiman skins, the Pantanal remained a hotbed for armed gangs of poachers and smugglers. An estimated one million caiman skins a year were being exported by the gangs. In response, the Pantanal's land owners—private cattle ranchers whose enormous holdings have produced beef since the late 1800s—joined forces. Their aim was threefold: to protect themselves, their livestock and the wildlife that normally thrives on these private estates, many of which cover hundreds of thousands of acres.

LIVING FOSSILS: Basking in the sun, Paraguayan caimans remain largely motionless during the heat of the day in the Pantanal.

Fossils show that the species has survived virtually unchanged since long before the dinosaurs became extinct.

The caiman's teeth are self-replacing and its stomach juices are so potent—considered the most acidic of any animals alive today—that it can digest every last morsel of prey it swallows.

Banding together, the landowners succeeded in driving out most of the poachers, and today, with family ties in this expansive wilderness running back generations, many ranchers feel deep respect and attachment to the wild animals in their custody. Some have turned to ecotourism as a means of drawing attention to these riches.

Roberto Klabin is one of them. His ranch at the very edge of the Pantanal, named the Caiman Ecological Refuge, receives wildlife enthusiasts like myself from around the world. "Ten years ago you would have been lucky to see just one or two caimans in a week here," says Klabin, pointing at the many fat reptiles dozing on the lakeshore in front of his rambling ranch house.

The timing of my Pantanal stay coincides with the early dry season in July, and everywhere ponds and waterways are shrinking as they begin to dry out in their annual cycle of renewal. For the caimans, which are remarkably adaptable to all sorts of habitat from open swamp to forested riverbank, this means finding a secure location where water will remain available until the next rainy season.

Several dozen have taken up residence in a shallow watercourse serving as outflow to a large marshy lake, where I watch them daily. Only the tiniest of trickles still runs, but it is enough to govern the caimans' day. I find their slow and unobtrusive lifestyle, virtually unchanged for at least 80 million years, utterly fascinating.

With bone-plated hides and massive, crushing jaws, they make formidable predators. Their teeth are self-replacing and their stomach juices so potent—possibly the most acidic of any animals in the world today—they can digest every last morsel they swallow, bones, shell and all. Unlike mammals, their metabolism does not run in high gear, so they don't need constant food input to generate body heat. Instead, they can store energy as fat in their tails for months or even years between meals.

The caimans have complex social lives where large males dominate smaller individuals, with postures and hierarchy helping them avoid dangerous and energy-draining fights. And unlike all other reptiles outside the crocodilian family, female caimans make devout mothers. They will guard their nests and young with their lives, responding to the cries of tiny hatchlings by digging them out of the warm fermenting vegetation mounds they build especially to incubate their eggs.

Simply observing life at a caiman hole puts me into a time frame where the clock seems to tick far more slowly than elsewhere in the world. Not long after sunrise, the heat and humidity are already suffocating. But the caimans are in their element, heaped onto the sodden, spongy bank like so many flood-tossed rotting logs. They are basking in the sun to reach their preferred body temperature of 90 to 95 degrees F. Fifty or 60 strong, they lay so still they look like they could be made of stone, reminding me of the term "living fossils," a nickname they've earned for their ancient evolutionary history. Indeed, fossils show they have survived virtually unchanged since long before the dinosaurs went extinct.

As the day grows hotter, one by one the caimans open their jaws wide to let airflow cool their moist maws. By noon the heat is unbearable. As I retreat to the shade of the forest, the caimans slither quietly into the tepid swamp water for a while, reemerging later in the afternoon. Only toward the end of the day does a sparkle of impending activity light up in their slit-eyed faces, even though they haven't budged for hours.

Now the whole of the Pantanal appears to awaken from its daytime stupor. With the setting sun turning crimson as it plunges through heavy layers of muggy air, elegant marsh deer emerge from the shadows to graze among the reeds, and giant anteaters scuttle across higher ground in search of termite mounds and ant nests. Collared fish eagles take up positions overlooking their favorite ponds and plumbous ibis probe the swamps for invertebrates. Ear-piercing flocks of emerald parakeets settle in the crowns of leafless pink blossoming trees, while the deeply raucous cries of electric blue hyacinth macaws proclaim their intention to feed on oily palm nuts.

The caimans, too, are on the move, their rousing so gradual I hardly notice it at first. One by one they slither and glide toward the lake overflow where a thin film of water cascades down the embankment. They seem to know that with darkness tiny fish will be running downstream. Without shoving or jostling—barely moving at all, in fact—each of the creatures takes up a position in the current, mouth agape, letting the water and fish swirl through their formidable gleaming teeth.

By the time the brief tropical dusk fades from gold to silver, and finally to hints of copper, the caimans form a perfect fan in the flow. They present a contiguous fanged barrage through which the fry must pass. Even the sound of the water flow has changed as it gurgles over and between row upon row of waiting teeth. Entire schools of small fish discover the trap too late, leaping frantically as jaws clamp shut at the slightest contact. It is an eerie scene, one I find all the more electrifying because of the contrast between the caimans' day and night demeanor. From lazy daytime lounging, they are transformed into stealthy predators concentrating on their task with chilling purposefulness.

Slipping off my boots, I tiptoe quietly into the shallow stream, facing the scene head-on. By staying in the darkest shadows, I manage to get within about six feet of the reptiles, with only a couple of them spotting me and retreating to deeper water. In my flashlight beam, dozens of caiman eyes shine as bright as rubies. Their pupils, now dilated wide and circular, give them visual acuity on par with owls.

Deep into the night, the reptiles' feeding frenzy on the tiny, two-inch fish continues. Clop, clop, clop. The incongruous primal feeding sounds mingle with other nocturnal cries and the incessant whine of swarming mosquitoes. Eventually, the bloodsucking insects, not the hungry reptiles, drive me away. By morning, on many a Pantanal stream bank like this one, caimans will once again be resting peacefully, back from the brink and here to stay.