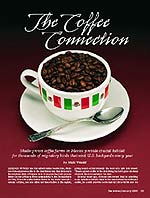 LIKE HIS FATHER and his father's father before him, Antonio Gomez grows coffee in the traditional way that farmers in the Mexican state of Oaxaca have been growing it for generations. On his 250-acre finca (plantation) in the Sierra Madre del Sur, Gomez's coffee bushes thrive in the shade beneath a canopy of pine, oak and other tall trees native to the region, giving much of his property the look of a lush rain forest. "Shade-grown coffee is the only thing that will grow on steep slopes in these mountains," he says.

Several years ago, Gomez discovered that by planting more varieties of shade trees in the areas where he cultivated coffee, he could provide more habitat for wildlife and do himself a favor in the process. "The more birds and beneficial insects we can attract, the less problems we have with pests that harm our crops," says the farmer, who raises earthworms to nourish the soil and grows native peanuts called Cacahuatillo between the coffee bushes to help prevent erosion. "It's a sustainable system that produces very high-quality coffee without pesticides," adds Beatriz Avalos-Sartorio, a leading Mexican agricultural economist based at Oaxaca's Universidad del Mar on the Pacific coast, about 25 miles southwest of Gomez's finca. Unfortunately, she notes, the system is in trouble

Like many of the other 17,000 coffee farmers in the mountains of Oaxaca, Gomez didn't harvest the fruit on his shrubs last year. With a worldwide glut in coffee driving wholesale prices to the lowest point in 30 years, he would have spent twice as much picking his beans as he would have received for them in the marketplace. By not harvesting his crop, he also risked damaging the physiology of his coffee trees, which can lose as much as 70 percent of their productivity the next year if the beans are left to die on the branch. Though Gomez is intent on keeping his woodlands intact no matter how big his losses may be, many of his neighbors are cutting down their coffee forests, selling the timber and then finding other ways to feed their families. "The ramifications of this forest loss go far beyond Oaxaca, to the United States and other countries," says Avalos-Sartorio

The largest coffee-consuming nation on the planet, the United States purchases more than a fourth of the two and a half billion pounds of java sold worldwide each year. Yet other than possibly knowing the country where a product comes from, most of the 115 million U.S. coffee drinkers know little about how that product is grown--or that the decisions they make every day about the kind of coffee they consume can indirectly affect the status of thousands of acres of tropical forests. Indeed, according to one report, only 12 percent of all U.S. consumers know that coffee is cultivated in different ways

"It's rare that we have the opportunity to trace the origin of a food product we buy to the actual place where it is grown, and to know whether it is grown organically or with intensive use of chemicals," says Barbara Bramble, director of the National Wildlife Federation's Mexico programs. "But we do have that opportunity with coffee. And by knowing those facts, we can make buying decisions that can actually help farmers in Latin America make a living, and protect wildlife habitat at the same time."

Coffee is the second-largest traded commodity in the world after oil. The beans are the seeds of shrubs--originally native to Ethiopia--that grow only at high elevations in some of the most biologically diverse regions on Earth. Each pound of roasted coffee a consumer buys generally represents all of the fruit harvested in one year from just one bush. 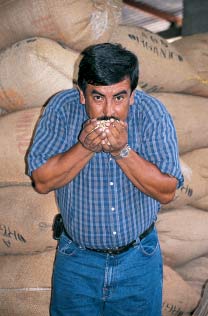 
MADE IN THE SHADE:Third-generation Mexican coffee farmer Antonio Gomez cradles a handful of beans, grown in the traditional way on bushes that are harvested beneath a thick forest canopy. "It's a sustainable system that produces very high-quality coffee without pesticides," notes one Mexican economist. But with wholesale coffee prices at their lowest point in 30 years, many of the 17,000 shade-grown coffee growers in the state of Oaxaca where Gomez lives are struggling. Their farms provide habitat for thousands of migratory songbirds that spend part of each year in the United States.

Historically, all coffee was cultivated in the shade beneath a forested canopy. But in the early 1970s, fostered by grants from the U.S. government, farmers in several countries began growing varieties of coffee that thrive in direct sunlight. The goal: to increase production.

Since more sun-grown coffee bushes can be cultivated per acre, and each shrub produces at least a third more fruit than its shade-grown counterpart, the conversion would seem to make good business sense. But without the natural protection provided by a surrounding forest, sun-grown coffee usually requires heavy doses of pesticides. And without the nourishing leaf litter from overhanging trees and nutrients in the forest soil, sun-grown coffee needs large amounts of chemical fertilizers, many of which wind up polluting nearby water supplies. Researchers at Conservation International found that, in some places, growers use about a pound of toxic chemicals for every pound of sun-grown coffee they produce, making it one of the most chemically intensive crops on the planet.

In Oaxaca, however, farmers rarely rely on chemicals. "Even if I could afford to use them, I wouldn't want to expose myself or my workers to poisons," says Freddy Villegas, whose family has owned a large finca on a lush mountaintop, 3,600 feet above sea level, for more than a century. "Plus, our shade-grown coffee does fine without pesticides.

Like Gomez, Villegas is determined to leave his forests standing, even though he now must travel many miles each week to Oaxaca City to work until coffee prices increase enough to enable him to make a living from his crops. "To me, this is one of the most beautiful places on Earth," he says. "I'm proud that we share our land with so much wildlife.

In studies conducted in the neighboring state of Chiapas, biologists at the Smithsonian Migratory Bird Center discovered that traditional shade-coffee plantations support more than 150 species of birds--a figure exceeded only by the number of birds found in similarly sized, undisturbed tropical rain forests. By contrast, studies in Colombia and Mexico found between 94 and 97 percent fewer bird species inhabiting sun-grown coffee farms. Elsewhere, scientists have documented dozens of species of mammals, including ocelots and other endangered animals, living in forests on Latin American coffee fincas. One researcher counted more than 600 species of spiders and insects on a single coffee farm.

"When most people think about protecting biodiversity, they think primarily about creating parks and reserves," says Heidi Albers, an economist at the Washington, D.C., think tank, Resources for the Future. "They tend to overlook managed ecosystems in developing countries that not only protect biodiversity but also provide important environmental services.

In the case of shade-grown coffee farms, those services are considerable. "In western Oaxaca, 90 percent of the fresh water comes from aquifers that are replenished in the mountains where the fincas are located," says Avalos-Sartorio, who is working with Albers to study the decline of the region's coffee plantations. "Those aquifers not only supply water for agriculture miles away in the coastal flatlands, but also nourish the coastal estuaries." Without the influx of such fresh water, she adds, thousands of people who depend on coastal fisheries could potentially lose their livelihoods.

Through photosynthesis, the trees and other plants on the fincas also absorb carbon dioxide--the leading culprit in global warming. Researchers estimate the value of such carbon sequestration services provided by Mexican forests at between $8 and $40 per acre. The value of those forests in terms of watershed protection is considerably higher.

According to a recent report by the Institute of Geography at the Universidad Nacional Autonoma de Mexico, nearly 283,000 hectares (700,000 acres) of forested land in the country's main coffee-growing areas were destroyed between 1993 and 2000. "When you cut down a forest, rain flows over the top of the soil, causing erosion and siltation that winds up in rivers," says Albers. She and her colleagues are finding evidence of considerable forest loss at higher elevations in Oaxaca, as coffee farmers increasingly sell the wood on their land or clear their trees to plant other crops. The result: a marked increase in erosion and flooding at lower elevations, leading to damages that are costing Mexican taxpayers millions of dollars each year to repair.

To help increase public awareness in Mexico about wildlife and the environment, NWF is developing a range of educational projects to assist its conservation partners in that country. Under its program Alianza para la Vida Silvestre (Partnership for Wildlife), NWF currently is in the process of creating Schoolyard Habitats in Monterrey, adapting environmental school materials for use throughout Mexico, and organizing  workshops that provide advocacy training opportunities for Mexican conservationists. The goal: to help build a broad base of support for protecting habitat for wildlife that ranges throughout North America.

Promoting Shade-Grown Coffee
NWF also is working with Green Mountain Coffee Roasters to educate the public about the benefits of buying shade-grown, organic, fair-trade coffee. For more information on this effort and how you can purchase such coffee, see our global warming personal solutions.

"One way to slow deforestation in coffee-growing areas," Avalos-Sartorio maintains, "is to reward coffee producers for the ecological services their farms have been providing for free for so many years." The economist hopes to convince government authorities to adopt a system of payments for environmental services, already in place in Chiapas, in which Oaxacan coffee farmers would receive 900 pesos a year (about $90) for every hectare they own to keep their forests intact.

Conservationists also see consumers in the United States as the key to helping farmers in Oaxaca and elsewhere stay in business. "If we want to see migratory birds in our backyards during spring and summer, we Americans have a responsibility to make it financially possible for people in other countries to protect the habitat that the birds need to survive during the other months of the year," says Tensie Whelan, executive director of the New York-based Rainforest Alliance, which certifies farms in Latin America that grow coffee using organic techniques.

Barbara Bramble agrees. With specialty products such as organic and shade-grown coffees now making up nearly a fifth of all U.S. coffee imports, she notes, "the opportunities for us to make the right buying decisions are increasing every day. This is one way each of us can make a difference. It's pretty simple, really." All we have to do, she says, is start each day by drinking bird-friendly coffee.

When it comes to buying coffee, making the right decision can be confusing. In many cases, shoppers must choose not only between shade-grown and sun-grown coffee, but also whether to buy certified-organic and fair-trade products (the latter ensuring that a fair price has been paid to Latin American farmers who distribute their harvests through small cooperatives).

Editorial Director Mark Wexler visited with coffee farmers in the Mexican state of Oaxaca  while reporting for this article.