The Island That Spawned The System 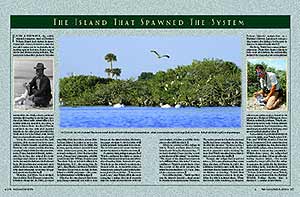 FROM A DISTANCE, the oddly stunted mangrove trees of Florida's Pelican Island look dusted in snow. Approach closer, however, and the snowfall turns out to be hundreds of nesting egrets, herons, ibises, wood storks and downy young pelicans. The mangrove's dwarfed greenery likewise results from the birds, whose continual pruning for nesting material has produced an island-wide bonsai effect. Scientists estimate that this tiny islet, a stone's throw from the East Florida mainland on one side and barrier islands on the other, has provided the birds and their nestlings safe haven from predators for thousands of years.

Yet in the closing years of the 19th century, this ancient rookery came within a hair's breadth of extirpation. First came the winter tourists, shooting clouds of island birds for idle entertainment. Plume hunters followed, systematically raking the island for both nestlings and adults to feed the insatiable demand for fashionable feathered hats. Naturalists and scientists only added to the massacre in the late 1800s with their wholesale collection of eggs and specimens for display.

Watching it all from the mainland, boat builder Paul Kroegel cursed the mindless slaughter. In 1881, Kroegel established his boat shop across from Pelican Island in order to enjoy the sight of reeling birds. But by 1898, the herons, egrets, roseate spoonbills and white ibises were gone, the pelicans severely reduced. Over the next five years, Kroegel and pioneering wildlife conservationists William Dutcher and Theodore Palmer lobbied officials in Washington, D.C., for protection. In 1903, they finally convinced President Theodore Roosevelt to declare Pelican Island a wildlife sanctuary—the country's first national wildlife refuge.

Hired as the sanctuary's first manager, Kroegel earned $1 a month to keep his eye on the island rookery. He kept a ten-gauge shotgun in his dockside skiff to help persuade trespassers to move on. The mild-mannered conservationist started the island on its slow recovery.

A century later, refuge manager Paul Tritaik continues the fight to protect Pelican Island and its spectacular diversity of nesting birds. Instead of a gun, Tritaik faces the island's modern-day threats with an impressive array of bureaucratic wrangling and artfully harnessed public activism. "I try every angle I can," says Tritaik of his ten years managing a refuge that until recently didn't so much as provide him with his own budget, let alone a wildlife biologist or other full-time help.

When he arrived at the refuge in 1993, Tritaik realized that Pelican Island was literally disappearing. "I noticed it when I was looking at old aerial photos of the island," he explains. "The shape of the island was dramatically different than it is today." A survey confirmed Tritaik's worst fears: Over the course of the 20th century, the island had eroded from a 5.5-acre triangle to a 2.2-acre comma.

Part of the problem, Tritaik realized, was the island's location—dead center in Florida's busy Intracoastal Waterway. The wakes generated by the heavy boat traffic had been pounding on the fragile islet for decades. "At some point, I knew the island would simply be too small to support a viable rookery," he says. But Tritaik remained powerless to stop or even slow the traffic.

Though the refuge had acquired some 4,700 acres of surrounding water from the state of Florida in 1963, the additional territory came with the precondition that no restrictions be placed on fishing or boating. Tritaik first turned to volunteer labor to try to stabilize the islet's battered shore. When that made little headway, he finagled Pelican Island's designation as a National Historic Landmark into getting money for hiring a helicopter to dump 250 tons of oyster shell.

Similarly, Tritaik has wrangled Environmental Protection Agency funds to help clean and restore the surrounding Indian River Lagoon, even as he gleaned other restoration money based on its status as a National Wilderness Area. Most importantly, perhaps, Tritaik continues to network with Pelican Island's many passionate local supporters, who stand ready to wield their lobbying clout as well as their physical labor.

A sea change in government support arrived in 1999, says Tritaik, when U.S. Fish and Wildlife Service Director Jamie Rappaport Clark committed her agency to transforming this, the nation's first wildlife refuge, into a showcase for the system's upcoming centennial. Within three years, the refuge had acquired more than 150 acres of neighboring barrier island. The newly acquired acreage will allow the refuge to welcome the public for the first time with hiking trails, boardwalk, rookery observation tower and visitors' center. "Pelican Island today," says Tritaik, "stands as a monument to the National Wildlife Refuge System that it spawned."

Refuge System Facts
From Sea to Shining Sea—And Far Beyond

The National Wildlife Refuge System currently protects nearly 95 million acres—roughly 4 percent of the total land area of the United States. Its 539 refuges and management areas include several sites that serve as stepping stones along the nation's major migratory bird flyways. Nearly 100 were set up or expanded specifically to provide habitat for endangered and threatened species of native plants and animals.

Since the creation of the nation's first wildlife sanctuary in 1903, others have been established in all 50 states, as well as Puerto Rico, the U.S. Virgin Islands, Guam and American Samoa. Refuges have also been created on U.S. possessions more than 1,000 miles southwest of Hawaii in the Pacific on Baker, Howland and Jarvis Islands, and on Johnston Atoll. Another U.S. possession, 1,300-acre Navassa Island in the Caribbean, was designated as a refuge four years ago, in part to safeguard the pristine coral reefs that surround it.

Although about 90 percent of the refuges are located in the contiguous 48 states, more than half of the system's acreage is found in Alaska's refuges. One of them, the Alaska Maritime National Wildlife Refuge, is made up of more than 2,500 islands and headlands where some 40 million seabirds of 30 different species breed and nest. Superimposed over the Lower 48, the refuge would stretch from California to Florida.

The smallest refuge is half-acre Mille Lacs in Minnesota, made up of two tiny islands in the Northwoods lake of the same name that are important bird nesting sites. The largest is Yukon Delta in western Alaska, with more than 21 million acres (counting lands submerged in water). The largest in terms of only terrestrial acreage is also the most controversial: Alaska's 19.6-million-acre Arctic National Wildlife Refuge.