A Natural History of Water in America

A fragile linkage exists between the nation's water supplies, the wild places where they come from and the life that the two support together 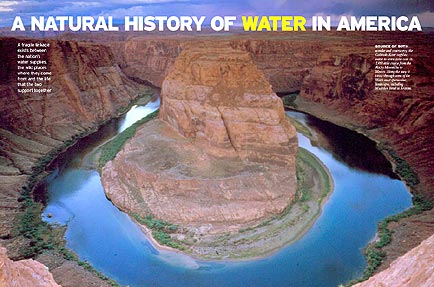 FOR TENS OF MILLIONS of years, a corps of natural hydrologists contributed significantly to the continuous cleansing of our continent’s water supplies. In many North American woodlands, some 200 million beavers slowed rivers and streams to a silt-dropping crawl with their semiporous dams. Through relentless logging, the beavers also created an elaborate network of wetland meadows that absorbed and further cleansed surface runoff.

Beyond the forests, tens of millions of bison and elk worked in tandem with wildfires to sustain the short-grass and tallgrass prairies that soaked up the torrential downpours of seasonal thunderstorms. Beneath these same grasslands, thousands of colonies of prairie dogs dug vast networks of tunnels that channeled groundwater still deeper, feeding and purifying underground rivers that continually recharged lakes and surface streams.

In these ways, this network of keystone wildlife species helped maintain a clean supply of the continent’s most vital, life-sustaining substance. For while many forms of life can survive without oxygen, none can do so without water. Indeed, 60 to 80 percent of every living cell consists of water, and all vital biological processes begin or end with this simple molecule. So far as science can discern, life on this planet began in a watery cradle. And when astronomers scan other planets for the potential to support life, they look first for water.

Other than humans, beavers have done more to shape and reshape the North American landscape than any other mammals. At one time or another, the estimated 200 million beavers that once lived in the continental United States probably modified almost every watershed in the country. In building their dams and turning forestlands into fertile valleys and wetlands, the big rodents have created habitat for hundreds of other species. One 1990 U.S. Forest Service study, for example, found that beaver ponds in central Idaho support three times more songbirds than adjacent stream areas with no beaver ponds.

And, so, as seen from space, the sparkling blue ball that is Earth reveals itself to be a paradise of wetness. Above the oceans and lakes that cover more than 70 percent of the planet’s surface drifts an ever-shifting lace of water-vapor clouds. Water pours from our skies, courses down our mountains and flows across every continent, back to the seas where the warming sun sends it skyward again. In this manner, our planet continually recycles an estimated 370 quintillion gallons (18 zeros), most of it older than the oldest fossils.

As life in North America and elsewhere evolved around water’s unique properties, elaborate ecosystems developed to ensure continual recycling and purification of the liquid. In Water: A Natural History, environmental engineer Alice Outwater describes the consequences of disrupting these ecosystems, particularly the large-scale decimation of North America’s pre-Columbian populations of beaver, bison, elk and prairie dogs. "By tampering with and in some cases eliminating the ecological niches where water cleans itself," she says, "we have simplified the pathways that water takes through the American landscape, and we have ended up with dirty water."

Of the 1,200 or so species listed as endangered or threatened by the U.S. Fish and Wildlife Service, 50 percent, including sockeye salmon (above), depend on free-flowing rivers and streams for survival.

Without wetlands and prairie grasslands to absorb rainfall, water slaloms across the landscape, picking up and dumping sediment into streams and lakes. Without beaver dams to brake their flow, streams frequently deepen into brown-water gulleys, continually eating away at their own banks. In an even more dramatic manner, development that clears natural vegetation speeds sediment-laden runoff during rainstorms, while adding a potentially toxic load of pesticides and other chemicals. The U.S. Geological Survey’s recently completed ten-year assessment of the nation’s water resources found multiple pesticides and unnaturally elevated levels of phosphorus and nitrogen in virtually all streams and groundwater sampled outside undeveloped wilderness. The majority of these streams contained pesticides at levels that exceeded—and often far exceeded—federal guidelines for the protection of aquatic life. These same chemicals can likewise endanger humans if they enter the drinking water supply.

"Scientific studies have repeatedly shown that our ability to protect our water sources from pollutants—and there are many of them—relates closely to our ability to safeguard our own health, especially that of our children, with their growing bodies," observes Monty Fischer, National Wildlife Federation policy director of water resources. "As conservationists, we’re also keenly aware of the crucial role an untainted and abundant water supply plays in sustaining wildlife."

Contrary to popular belief, rain does not fall in the shape of teardrops. In fact, small raindrops tend to be spherical, while larger ones are flattened on the bottom and resemble the top half of a hamburger bun. Some of the world’s biggest known raindrops—measuring as wide as a third of an inch—have been photographed falling in Hawaii. Those drops, University of Illinois physicist Kenneth Beard discovered, survived an average of ten minutes before breaking apart—a comparatively long time in the world of raindrops. A storm that drops one inch of rain deposits about 27,000 gallons of water on a single acre of land.

Over the last century, adds Outwater, the U.S. Army Corps of Engineers often worsened such problems by straightening and channeling rivers and streams to stem the wetland flooding and regeneration that was likewise part of the water-cleansing cycle. During the same period, the country’s human population nearly quadrupled (from 76 million in 1900 to 281.4 million in 2000), while rates of U.S. per-capita water consumption increased from around 5 to 10 gallons per person per day to between 50 and 100 gallons. This new era of unprecedented demands has sparked attention-grabbing shortages in every region of the country, as well as significant increases in water bills. 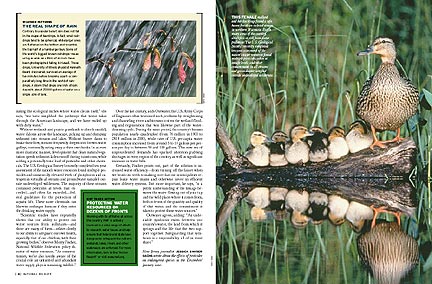 THIS FEMALE mallard and her ducklings (right page) found a safe haven beside an isolated stream in northern Wisconsin. But in many areas of the country, wildlife is at risk from water pollution. The U.S. Geological Survey’s recently completed ten-year assessment of the nation’s water resources found multiple pesticides, often at unsafe levels, and other contaminants in all streams and groundwater sampled outside undeveloped wilderness.

Certainly, Fischer points out, part of the solution is increased water efficiency—from turning off the faucet when we brush our teeth to making sure that our municipalities repair leaky water mains and otherwise invest in efficient water-delivery systems. But more important, he says, "is a public understanding of the linkage between the water flowing out of your tap and the wild places where it comes from, both in terms of the quantity and quality of that water, and the commitment it takes to protect those water sources."

Outwater agrees, adding: "An undeniable symbiosis exists between our country’s water, the land from which it springs and the life that the two support together. Safeguarding that symbiosis is a responsibility all of us must share."

New Jersey journalist Jessica Snyder Sachs wrote about the effects of pesticides on endangered species in the December/January issue.

Working with its affiliates all across the country, NWF is actively involved in a wide range of efforts to research water issues and help ensure that federal and state laws designed to safeguard the nation’s wetlands, lakes, rivers and other waterways are enforced. For more information, turn to the "Action Report" or visit www.nwf.org.

What is it that makes H2O the liquid of life itself?

In chemical structure, the water molecule could hardly be simpler: two hydrogen atoms stuck like Mickey Mouse ears onto a single atom of oxygen. But in that simplicity can be found water’s unique properties.

In essence, every water molecule is a tiny magnet, and its strong polar nature gives it the ability to dissolve an unparalleled range of substances, including a wide range of salts. In addition to the familiar sodium-chloride molecule we know as table salt, these include scores of biologically important substances such as potassium chloride, magnesium chloride and calcium sulfate. Indeed, all living beings—from plants to humans—depend on water to release the life-sustaining minerals contained in these salts.

Water’s remarkable solvent powers provide the perfect medium for virtually every biological reaction that occurs inside a living cell—from energy-storing photosynthesis to energy-consuming respiration. And water has the remarkable ability to dissolve gases—most importantly, oxygen and carbon dioxide. It is water’s oxygen-carrying capacity that sustains aquatic animal life.

A water molecule’s mini-magnet configuration generates a host of other queer qualities, as well. Given its simple structure and small size, it should fly apart into gaseous form at extremely low temperatures. But water molecules cluster into tight groups, with each molecule’s negatively charged oxygen atom lining up with the positively charged hydrogen on its neighbors. The considerable amount of energy needed to break these "hydrogen bonds" gives water the unusually high boiling point of 212 degrees F (100 degrees C). As a result, the planet’s surface water never completely evaporates under the beating sun. Instead, oceans and lakes act as impressive energy sinks for storing and slowly releasing solar energy to temper seasons, and smooth out temperature differences between day and night.

As temperatures drop toward freezing, the hydrogen bonds between water molecules perform another impressive trick. They preassemble into the open-lattice structure that gives snowflakes their beautiful patterns and makes ice lighter than water. This bizarre quality of water being lighter as a solid than as a liquid has a huge consequence: It is the reason that lakes and oceans don’t freeze from the bottom up, solidifying into a global ice block that even the hottest summer would never melt.—Jessica Snyder Sachs