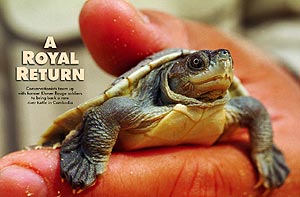 THE HUMID AIR hangs like smoke as we putter up the Kaong River in rural southern Cambodia. A parakeet swoops low and butterflies cluster on the shore, their erect wings clasped tightly. The afternoon sun bathes everything in hot white light.

Soon we arrive at a small beach that looks like any other along the Kaong, except for four bamboo cages planted in the sand. They surround the eggs of an endangered giant terrapin, Batagur baska, which conservationists have transported from a spot upriver where high tides would have washed them away. "They cannot hatch in the water," explains Heng Sovannara, a Cambodian biologist from Phnom Penh.

Moving these nests is a slow, meticulous process—each egg must be recorded and placed in the new nest precisely as it was laid. More than 100 days old, the eggs are now ripe for hatching. After three men dismantle a cage top, Sovannara, who works for the New York-based Wildlife Conservation Society (WCS), clambers inside. He paws through sand, flinging golden grains, digging six inches down. "Yes!" he shouts. "Hatch already!"

At the bottom of the nest is a miniature Batagur baska, legs flailing—boom, on its back, then upright again, trying to escape the hole. The reptile is less than three inches long and has a yellowish shell. Sovannara holds the tiny turtle as it squirms in air, and the audience breathes a collective, joyous "Ahhhhh..."

A hatching Batagur baska hasn’t always been such a monumental event. Generations ago, legions of these giant terrapins swam Cambodia’s rivers, swamps and estuaries. Considered property of the country’s royal family, the king hired guards to protect the animals. "A long time ago, the people collected eggs to give to the king," Sovannara says. "Only the king could eat these eggs"—which is why Batagur baska is called the royal turtle in Cambodia. 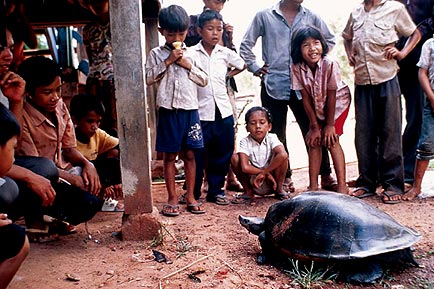 
FIT FOR A KING: Once only members of Cambodia’s royal family were allowed to eat the meat and eggs of the river turtle Batagur baska. These terrapins begin life as yellowish, three-inch-long hatchlings, but turn darker and grow to more than two feet in length as adults (above). Thought to be extinct in the country until 2001, the species now has a second chance, thanks to a project sponsored by the Wildlife Conservation Society.

But despite the king’s decree, royal turtles were hunted over the years, their eggs collected and their habitat destroyed. "They killed all," Sovannara says of the local villagers. Until 2001, when a small colony was discovered along the Sre Ambel River system in former Khmer Rouge territory, scientists believed Batagur baska had been extinct in Cambodia for the past century.

Now, thanks to Sovannara and other Cambodians who participate in a WCS project—many of them former Khmer Rouge soldiers—the royal turtle may have a second chance. Launched in 2002, the project began with a survey of terrapins in the area, followed by the creation of a year-round program to guard new nests, deter poachers and teach villagers about the animal’s plight. "The amazing commitment both the local village rangers and the government have shown at protecting Batagurs and their nests makes me optimistic," says WCS Cambodia program manager Colin Poole.

One of the largest in the Emydidae family of turtles, Batagur baska can grow to more than two feet in length. Its olive gray carapace blends in well with the murky waters it inhabits in Southeast Asia. The turtles, which may live to be 100, reach sexual maturity at about 25 years old. Mating just before or early in the dry season, females lay between 13 and 34 eggs three months later and may nest up to three times a year. The turtles compact their nests by thumping their bodies on sand—making a noise that gives the species the name tuntung in Malay.

Batagur baska once inhabited rivers and swamps from India east through Vietnam and south through Indonesia. But today only small populations remain in Malaysia, India and Bangladesh, as well as the Sre Ambel River region of Cambodia. IUCN—The World Conservation Union lists the reptile as a critically endangered species. 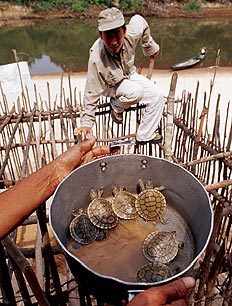 HELPING HANDS: These Batagur baska hatchlings will be released in the Sre Ambel River by Cambodian project participants. For employees such as Heng Sovannara, climbing over a fence that protects nests from predators (above), the turtle project provides the best jobs they’ve ever had.

Batagur populations were decimated by a combination of threats, including water monitor lizards, nets and explosives used by fishermen, logging and weak law enforcement. Throughout its range, the turtle’s habitat dwindled as forests were cut and boats plied rivers where it once thrived. The terrapins also taste good. "Delicious for the villagers," Sovannara says. Eggs are a delicacy, and the animals’ meat—like that of other endangered turtles—is still a prized commodity, not only in Cambodia but throughout Asia.

Heading up the Sre Ambel River the following day, we stop at the home of a ranger named Osmang. In his small thatch house on stilts, a Panasonic radio hangs from a post, burbling old American love songs. We sit on a slat floor with Osmang, his wife and a friend. Their possessions comprise the Panasonic—new this year, paid for by the turtle work—cooking utensils, a fish net and numerous cassava, chili and papaya plants surrounding the home. The couple has five children, three girls and two boys, ages 5 to 19.

Osmang, 41, says he ended his work as a Khmer Rouge soldier before Cambodia’s 1993 United Nations-sponsored elections. When I ask his thoughts on his previous life, his wife, Kaow, abruptly answers for him: "Didn’t like it! Didn’t like it!"

Though its primary purpose is to protect and restore Batagur baska, the turtle project also nurtures local people by hiring former Khmer Rouge soldiers—the safest, most lucrative jobs they’ve ever had. The conservation team includes seven former soldiers, hired as rangers or turtle collectors, plus a speed boat driver and team leader from the Fisheries Department in the town of Sre Ambel. WCS pays each team member $40 a month. All participants teach local villagers and fishermen how to recognize royal turtles—and why it is important to leave the animals and their eggs alone.

Their work seems to be paying off. According to Sovannara, royal turtles no longer appear in the markets around Sre Ambel. Yet in a country with an average per capita income of $260 a year and rampant poverty, people still sell and eat Batagur baska meat and eggs elsewhere. Sovannara says the reptile’s meat sells in the market for 2,000 riel, about 50 cents, per kilogram; the eggs sell for 1,000 riel, or 8 cents, apiece.

Some of Batagur baska’s biggest threats lie outside Cambodia. In China, food markets sell thousands of endangered Asian turtles every year, according to a report by James Barzyk for the London-based Tortoise Trust. In 1996 alone, 7.7 million pounds of turtles were eaten in Hong Kong. In December 2001, 10,000 live turtles were seized from a ship stopped offshore. According to officials, the animals had been caught in the wild and many were injured during shipment. The lot contained 11 species, including Batagur baska, worth just over $400,000.

In the report, Barzyk describes a "three prong attack" against endangered Asian turtles: collecting adults, harvesting eggs and destroying habitat. He blames these threats for the royal turtle’s 90 percent decline over the past century in Malaysia alone. In Thailand, the species is probably extinct in the wild, according to Kalyar, a biologist at Chulalongkorn University in Bangkok.

That night at Osmang’s house, we sleep beneath mosquito nets, with the moon rising as a misty orb over far-off trees. The sound of terrapin claws against aluminum pots serenades us like soft rain. Rangers placed the tiny turtles in the pots earlier in the day. The animals tumble against each other, scratching, clawing, pushing in an instinctive search for water. They will do this all night and all morning until their release in higher waters on the Sre Ambel.

Early next morning on the river, the air is sweet with jasmine as we motor slowly, passing an otter in our path. We disembark at a grassy path near a highway and head to Sre Ambel town. There, Sovannara dangles each hatchling in a plastic bag clipped to a hand-held scale. With a measuring tape, he notes length and width. Then we’re off to set the turtles free.

Up the Sre Ambel, we stop in Kring Chek village. Sovannara’s first task, as always, is to educate the crowd ogling the terrapins. Villagers say they have seen soft-shelled turtles before, but nothing like these.

Then, we hike through a field to a mucky spot at the water’s edge. Everyone wants a part. We’re covered in mud, up to our ankles, calves, thighs. People dig into the pot, each grabbing a turtle, and— plop—into the water they go. They sink, pop up, then spin around before entering the current. Children squeal with delight.

Some turtles return toward land, as though confused, but villagers redirect them. Tiny heads bob in straight lines across the water. "I am very happy the baby can swim across the river," Sovannara says. "I request to the villagers, ‘Help us protect this species.’ I think in the future the population will increase."

Back in the boat, pulling away from the beach at Kring Chek, we see a man up to his chest in murky water, fishing net in hand. A woman riding with us hollers at him in Khmer. Words burn through her mouth in amazing pitch, volume and speed for several minutes, while the man silently nods his head: "Yes, yes, yes."

"What did she say?" we ask Sovannara in English.

Bangkok-based writer Karen Coates regularly covers the environment; her book on contemporary life in Cambodia will be published in 2004 by McFarland & Company.