A Tale of Two Penguins 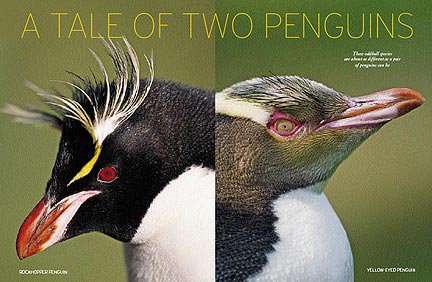 PENGUINS--those endearing seabirds that have traded wings for flippers—all look and act about the same and live on the icy shores of Antarctica, right? Wrong. Granted, all penguins walk upright like little people, are superb swimmers and divers, and prefer the cooler oceans of the Southern Hemisphere, but that's pretty much where the similarities end.

Of the world's 17 diverse penguin species, I got to know two of the most unusual—rockhoppers and yellow-eyeds—on the verdant shores of Campbell and Auckland Islands, some 300 miles south of New Zealand but 1,200 miles north of Antarctica proper. Though the penguins share these little-known, storm-lashed specks of land as safe havens to raise their chicks, their lifestyles and habits are so totally different that they may never even meet.

The birds also look quite different and inhabit distinctive ranges that overlap on the islands. Standing less than two feet tall and weighing about five and a half pounds, rockhoppers are the world's third smallest penguins and among the most widespread, found on islands scattered all around the lower parts of the globe. Plump yellow-eyed penguins, on the other hand, weigh three times as much, are the fourth largest species, and are among the most localized, being completely restricted to waters immediately adjacent to New Zealand's southern reaches.

New Zealand's Campbell and Auckland Islands are two of the wildest places left on the planet. Winds exceed 60 miles an hour more than 100 days a year, and rain falls an average of 325 days.

As for behavior, rockhoppers are noisy, bold and boisterous, nesting in megalopolis-scale colonies on some of the most weather-beaten coastlines imaginable; yellow-eyeds are shy and retiring, with pairs secluding themselves alone deep in mossy valleys and dark understory to nest in complete privacy. Rockhoppers do everything socially and in a frantic rush, concluding their seasonal breeding cycle—from egg laying to fledging—in just three and a half months, whereas yellow-eyeds take a leisurely five months to accomplish the same. Rockhoppers land through crashing surf onto storm-wracked shores and climb steep boulders and even cliffs to feed their chicks, while yellow-eyeds pick gently sloping beaches and sheltered bays to come and go. Rockhoppers feed far out in the open ocean, easily traveling 150 miles or more on each food gathering trip, and during the winter spend about six months without returning to land at all; yellow-eyeds usually stay within a few miles of shore and return at the end of each day to spend their nights ashore all year round, whether or not they are nesting. 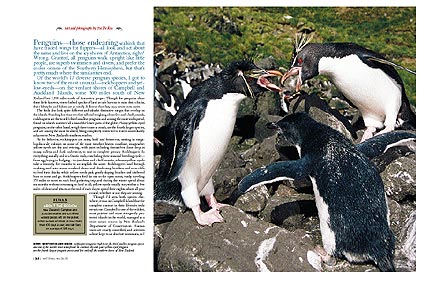 Though I'd seen both species elsewhere, it was on Campbell Island that the complete contrast in their lifestyles truly struck me. Campbell is one of the wildest, most pristine and most stringently protected islands in the world, managed as a strict nature reserve by New Zealand's Department of Conservation. Human visits are closely controlled, and activities ashore kept to an absolute minimum, so I was lucky to be granted a permit to spend six weeks documenting the island's wildlife.

A yellow-eyed penguin is so shy and secretive that just finding my first nest took many days of persistent searching. Occasionally I'd spot a little head popping out of the sea, or a couple toddling figures clambering ashore and vanishing into the vegetation. At twilight I could sometimes hear the excited brayings of a pair reuniting at their nest somewhere in the nearly impenetrable greenery far up the steep valley sides.

Penguins are not alone on Campbell and Auckland Islands. Every summer, albatross, petrels and seals arrive by the millions to breed in these strictly protected island reserves.

Tantalized, I began my search by crawling silently along mossy rivulets in the underworld of a cold, eerie elfin forest. Deep in the thickets I heard a soft peeping and glimpsed four little gremlinlike figures peering at me from between lush clumps of dark ferns. A pair and their two chicks, they scuttled quietly out of sight. Gradually, however, I gained the birds' trust, and was eventually able to watch the parents arrival in the evening, an ecstatic family reunion, and hungry chicks being fed a big gulletful of fish and squid.

Finding rockhoppers was a totally different experience. This time I had to hike several hours across the island to reach its weather-beaten western outcrops, where rugged cliffs are lashed by gale-force winds and huge thundering waves. Here I watched in fascination as tightly coordinated bands of little penguins materialized out of the maelstrom, porpoising through the roiling seas to pop out of the foam like sleek, feathered bullets. Using beaks, flippers and toenails, they landed in successive waves, hopping frantically over slippery kelp and up near-vertical rock slabs. 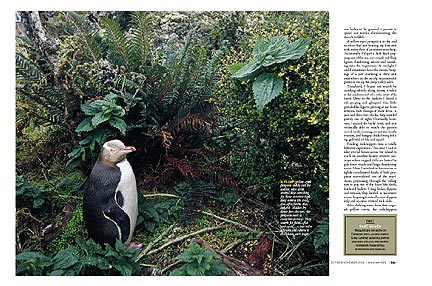 A PLUMP yellow-eyed penguin checks out the author, who spent several days searching for these secretive birds deep within the cool, dim elfin forests they inhabit. Hidden by dense fern thickets, the penguins nest in complete privacy. They search for food—fish and squid—a few miles offshore and return to the islands each night.

After shaking water from their roguish yellow crests, the rockhoppers trooped up well-worn pathways to join the loud ruckus of the colony on the open slope above. Exuberance and rowdiness seemed to rule their little metropolis. Everywhere, these spunky characters were hopping this way and that; screeching, greeting, fighting and crooning to one another; feeding their demanding chicks; or ganging up to chase away predatory skuas—all with great gusto and pluck. Some came over to where I sat to check me out, their fiery red eyes scrutinizing me up close, before resuming their noisy business.

Sadly, all is not well in either of these oddball penguins' private little worlds. Though yellow-eyeds once lived all along New Zealand's sheltered southeastern coasts, habitat loss through fire and farming, plus a succession of introduced predators from ferrets to cats and dogs, have taken a huge toll. No one knows how many of the penguins once inhabited New Zealand, but today the total is estimated to be between 1,500 and 2,000 nesting pairs. On the New Zealand mainland, the number of yellow-eyeds has dropped an alarming 20 percent in just two decades.

Some penguins live in warm habitats, including Australia, the southern coasts of Africa and the Galápagos Islands, where their challenge is to lose heat rather than conserve it.

The good news is that more than half of the total remaining yellow-eyed population still nests on Campbell and Auckland Islands (at the southern limit of the species range), where New Zealand's Department of Conservation has for 20 years been working to repair the damage done by farming and whaling ventures more than a century ago—primarily by eliminating the feral sheep, goats, cattle and rabbits that are a legacy of those ill-fated enterprises. Three years ago, a multimillion dollar eradication campaign—the largest of its kind ever undertaken in the world—used helicopters to drop 120 tons of poisoned bait to rid Campbell of some 200,000 rats, allowing the island to revert to a completely natural state. The next big challenge will be the voracious pigs still overrunning the main part of Auckland. 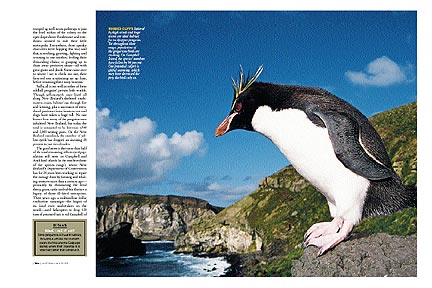 RUGGED CLIFFS battered by high winds and huge waves are ideal habitat for rockhopper penguins. Yet throughout their range, populations of the gregarious birds are crashing. On Campbell Island, the species' numbers have fallen by 94 percent. One potential culprit is global warming, which may have decreased the prey the birds rely on.

Unfortunately, such success stories may not help rockhopper penguins. Four decades ago, a staggering 1.6 million rockhoppers were estimated to nest on Campbell Island, but the birds' numbers have declined by 94 percent of that figure today. Once considered among the world's most numerous penguins, rockhoppers have faced similar population crashes nearly everywhere, from the Falkland Islands in the South Atlantic to Macquarie Island south of Australia.

WHAT'S IN A NAME

One theory about the origin of the name "penguin" is that it comes from the Latin word pinguis, which means "fat." Before they became extinct, great auks were also commonly known as penguins.

Theories to explain the species' worldwide population collapse abound. The most convincing comes from a recent study by marine biologists David Thompson and Paul Sagar of New Zealand's National Institute of Water and Atmospheric Research. By comparing chemical information, called stable isotopes, stored in feathers of museum specimens collected long ago with those of living rockhoppers, the researchers found that although the penguins' diet is unchanged, they have not been finding the same quantity of prey. Thompson and Sagar say their discovery demonstrates a decline in overall primary productivity of the Southern Ocean—apparently linked to rising sea temperatures—that has affected the penguins' food supplies.

If global warming turns out to be the culprit, no amount of habitat protection will help rockhoppers hold their own even on pristine Campbell Island. And so it may be that of these two most unusual and contrasting penguins, the inherently rare, shy and retiring yellow-eyed will outlast its bold and daring rockhopper cousin—perhaps the most endearing and gutsy of all penguins.

Tui de Roy and her partner Mark Jones mounted their own sailing expeditions to the stormy subantarctic islands to document penguins and other wildlife.