In contests for scarce Southwestern water, wildlife may get only what's leftover—and that's not nearly enough 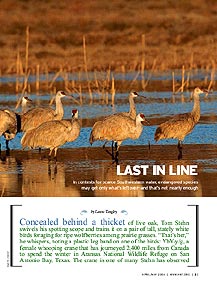 CONCEALED BEHIND A THICKET of live oak, Tom Stehn swivels his spotting scope and trains it on a pair of tall, stately white birds foraging for ripe wolfberries among prairie grasses. "That's her," he whispers, noting a plastic leg band on one of the birds: YbY-y/g, a female whooping crane that has journeyed 2,400 miles from Canada to spend the winter in Aransas National Wildlife Refuge on San Antonio Bay, Texas. The crane is one of many Stehn has observed year after year since he began working at the refuge in the early 1980s. "It's like running into an old friend," says the biologist, his tanned, bearded face breaking into a broad smile.

Stehn has reason to be happy. In the two decades he's been a member of the Whooping Crane Recovery Team, he's watched the population of this last wild flock of the endangered species increase an average of 4 percent each year. This past winter, 194 whoopers wintered in Aransas, "a record number," says Stehn, now whooping crane coordinator for the U.S. Fish and Wildlife Service (FWS), adding that 61 nests tallied in Canada last summer also set a record. Down to just 15 birds in 1941--and the target of one of the first major U.S. efforts to save a species from extinction--the whooping crane's slow but steady recovery over the past several decades is a well-known conservation success story.

These days, though, the crane faces new threats, and one of the most formidable stems from the population growth of another species: Homo sapiens living 200 miles north of Aransas in and around the city of San Antonio. With 1.5 million inhabitants now, the metropolitan area is one of the state's fastest growing. For officials, the greatest challenge posed by this burgeoning population is how to provide residents enough water in a region that is naturally dry and prone to frequent droughts.

One option is a proposed $600 million project that would divert to the city nearly 87,000 acre feet of water a year from the Guadalupe River 10 miles above San Antonio Bay. But biologists like Stehn point out that plentiful supplies of freshwater and nutrients from the Guadalupe are what keep the bay--and its whooping crane habitat--healthy. He worries that cranes and other creatures may lose out as more powerful interests such as cities, industry and agriculture vie for the river's scarce water. "Texas law reserves water for people but not for wildlife and the environment," says Stehn. "They only get what is leftover." 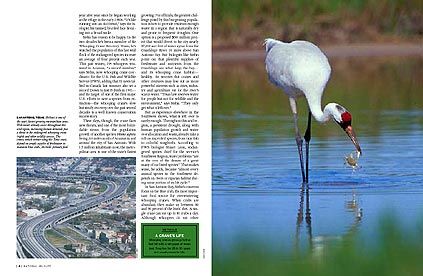 San Antonio is one of Texas's fastest growing metropolitan areas. With water already scarce throughout this arid region, increasing human demands pose a threat to the endangered whooping crane (above) and other wildlife species. The cranes, which winter along the Texas coast, depend on ample supplies of freshwater to maintain blue crabs, the birds' primary food.

But as experience elsewhere in the Southwest shows, what is leftover is rarely enough. Throughout this arid region, a persistent drought, along with human population growth and water overallocation and waste, already take a toll on imperiled species, from tiny fish to colorful songbirds. According to FWS biologist Stuart Leon, endangered species chief for the service's Southwest Region, water problems "are at the core of the demise of a great many of our listed species." That makes sense, he adds, because "almost every animal species in the Southwest depends on rivers or riparian habitat during some portion of its life cycle."

In San Antonio Bay, Stehn's concerns focus on the blue crab, the most important food source for overwintering whooping cranes. When crabs are abundant, they make up between 80 and 90 percent of the birds' diet. A single crane can eat up to 80 crabs a day. Although whoopers do eat other foods--wolfberries, acorns and clams, for example--nothing else has the protein and nutrition provided by blue crabs. "Cranes can eat clams until they're stuffed, but it's like being on a diet," explains Stehn. "They actually lose energy." Blue crabs in turn depend on freshwater inflows from the Guadalupe River to maintain the salinity levels in which they thrive.

During droughts, however, both species suffer. Stehn cites the winters of 1993–1994 and 2000–2001, for example, when minor droughts reduced crab numbers in the bay. Both times, crane mortality was higher than usual: seven and six deaths, respectively, versus no more than two all other years. Equally worrisome, he adds, more than a third of all known crane pairs failed to nest the summer following the 1993-1994 drought. "We think inadequate food meant the birds could not build up enough energy reserves." 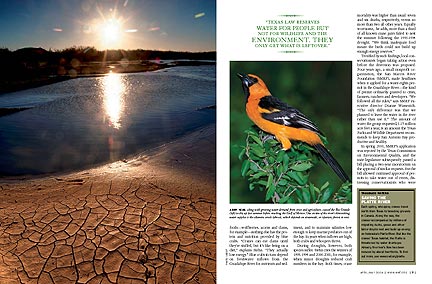 Last year, the Rio Grande dried up last summer before reaching the Gulf of Mexico. One victim of the river's diminishing water supplies is the altamira oriole (above), which nests in streamside, or riparian, forests.

Troubled by such findings, local conservationists began taking action even before the Guadalupe River diversion was proposed. Four years ago, a small nonprofit organization, the San Marcos River Foundation (SMRF), made headlines when it applied for a water-rights permit from the river--the kind of permit ordinarily granted to cities, farmers, ranchers and developers. "We followed all the rules," says SMRF executive director Dianne Wassenich. "The only difference was that we planned to leave the water in the river rather than use it." The amount of water the group requested, 1.15 million acre feet a year, is the amount the Texas Parks and Wildlife Department recommends to keep San Antonio Bay productive and healthy.

In spring 2003, SMRF's application was rejected by the Texas Commission on Environmental Quality, and the state legislature subsequently passed a bill placing a two-year moratorium on the approval of similar requests. But the bill allowed continued approval of permits to take water out of rivers, distressing conservationists who were closely watching this test case. "We were extremely disappointed," says Susan Kaderka, director of NWF's Gulf States Natural Resource Center. "The more consumptive permits are issued, the harder it will be to ensure adequate flow for the environment." 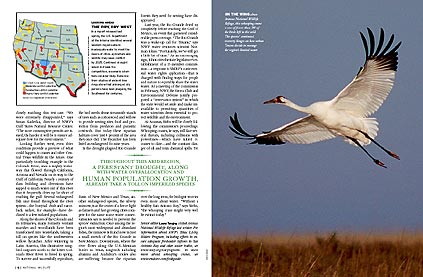 On the wing above Aransas National Wildlife Refuge, this whooping crane (above) is one of fewer than 200 of the birds left in the wild. The species' continued recovery hinges on how urban Texans decide to manage the region's limited water.

Looking farther west, even drier conditions provide a preview of what could happen to cranes and other Texas wildlife in the future. One particularly troubling example is the Colorado River, once a mighty waterway that flowed through Arizona, Nevada and California on its way to the Gulf of California. Nearly a century of dam building and diversions have sapped so much water out of this river that it frequently dries up far short of reaching the gulf. Several endangered fish once found throughout the river system--the bonytail chub and razorback sucker, for example--have declined to a few isolated populations of individuals more than 40 years old.

Along the shores of the Colorado and its tributaries, many formerly verdant marshes and woodlands have been transformed into wastelands, taking a toll on species like the southwestern willow flycatcher. After wintering in Latin America, this diminutive songbird migrates north to the lower Colorado River to breed in spring. To survive and successfully reproduce, the bird needs dense streamside stands of trees such as cottonwood and willow to provide nesting sites, food and protection from predators and parasitic cowbirds. But today these riparian habitats cover just 4 percent of the area they once did. The flycatcher has been listed as endangered for nine years.

In the drought-plagued Rio Grande Basin of New Mexico and Texas, another endangered species, the silvery minnow, is at the center of a fierce fight as farmers and fast-growing cities compete for the same scarce water conservationists say is needed to prevent the species' extinction. Once among the region's most widespread and abundant fishes, the minnow is found now in just a small stretch of the Rio Grande in New Mexico. Downstream, where the river flows along the U.S.-Mexican border in Texas, songbirds including altamira and Audubon's orioles also are suffering because the riparian forests they need for nesting have disappeared.

Last year, the Rio Grande dried up completely before reaching the Gulf of Mexico, an event that garnered considerable press coverage. "The Rio Grande was a wake-up call for Texans," says NWF water resources scientist Norman Johns. "Fortunately, we've still got a little bit of time." As an encouraging sign, Johns cites the state legislature's establishment of a 15-member commission--a response to SMRF's controversial water rights application--that is charged with finding ways for people and nature to equitably share the state's water. At a meeting of the commission in February, NWF, the Sierra Club and Environmental Defense jointly proposed a "reservation system" in which the state would set aside and make unavailable to permitting quantities of water scientists deem essential to protect wildlife and the environment.

At Aransas, Stehn will be closely following the commission's proceedings. Whooping cranes, he says, still face several threats, including collisions with powerlines--which have killed 31 cranes to date--and the constant danger of oil and toxic chemical spills. Yet over the long term, the biologist worries even more about water. "Without a healthy San Antonio Bay," says Stehn, "the whooping crane might very well be extinct today."

In a report released last spring, the U.S. Department of the Interior identified several western regions where inadequate water supplies to meet the needs of cities, agriculture and wildlife may cause conflict by 2025. Continued drought would increase the competition, a scenario scientists consider likely. Evidence from studies of ancient tree rings show that prolonged dry periods have been plaguing the Southwest for centuries.