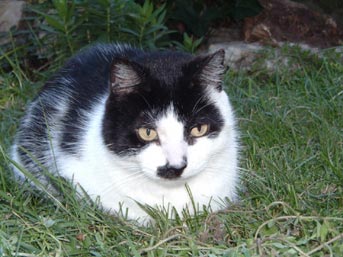 More than 140 million dogs and cats share a cherished spot in American households; here’s how to make our pets more environmentally friendly

Today, many Americans are aware of the heavy ecological footprint they leave behind, but few may stop to ponder the ecological paw print of their pets. “The animals can’t do anything about it,” says Patricia Conrad, a wildlife parasitologist at the University of California–Davis. “But people can.”

Since 1998, Conrad’s been studying sea otter deaths and strandings along the state’s central coast. A record 64 deaths occurred last April alone. Scientists linked 11 of the deaths to Sarcocystis neurona, a parasite carried in the feces of the opossum, a species not native to California. But, Conrad says, “the bigger culprit appears to be toxoplasmosis, caused by a protozoa found in the feces of the domestic cat.”

The parasite, which infects cats that eat birds or rodents, reaches waterways in storm runoff, and filter feeders such as shellfish—the endangered otters’ mainstay—ingest it. “It’s sad because there’s an easy solution,” says Conrad. “All people have to do is keep their cats indoors so that they don’t defecate outside, and bag their kitty litter instead of flushing it down the toilet.”

Because the parasites are hearty, chlorine used to treat water at sewage plants may not kill them all. “Although no one’s undertaken studies to prove this yet,” says Conrad, “it’s telling that 96 percent of the otters we’ve necropsied have died only a few miles from sewage discharge.”

When it comes to water pollution, dogs can also pose a problem. According to a 1999 Vanderbilt University study, dog feces are a major cause of water pollution in urban and suburban areas, particularly following periods of heavy rain. The runoff taints streams and rivers, robbing them of oxygen and killing aquatic life.

The researchers originally suspected that leaky septic systems and sewage pipes accounted for unexpectedly high bacterial levels in Nashville, Tennessee, streams and tributaries. “What we found instead was that in neighborhoods with no sewer problems, the most common fingerprint is that of dogs,” says Edward Thackston, an environmental engineer. “Nashville neighborhoods have relatively large yards where most of the dogs run loose. I’ve walked up a number of creeks taking water samples and I saw it all the time: Fences up to the water with the dog pen in the back corner and droppings all over the place.”

Animal wastes deposited on hard, flat surfaces such as streets, parking lots and lawns are less likely to decompose and much more likely to get washed into drains and ditches that flow into local waterways. “Higher levels of contamination occur where the housing is denser because,” says Thackston, “where there’s more people, there’s more pets.”

But it’s not just pet poop that can harm the environment. Each year Americans spend more than $1 billion battling fleas and ticks. The toxic chemicals they use contain nerve poisons that settle in homes, yards and waterways. “Consumers mistakenly believe that if the medications are available on shelves and sold by veterinarians, they are not harmful,” says Shawnee Hoover, special projects director of Beyond Pesticides.

A commonly cited case in point is the more than 300 pet deaths and thousands of poisonings that led Hartz Mountain to pull the flea repellent known as Blockade out of pet stores in 1987. The manufacturer paid the U.S. Environmental Protection Agency (EPA) $45,000 in fines for negligence—and had the product back on the shelf within two years. The situation replayed in 2001, when EPA stepped in again following mounting reports of animal deaths and illnesses related to two other flea products containing the insecticide phenothrin. In both instances, Hartz repackaged the products with more detailed warning labels—that, in part, told consumers to watch for adverse reactions—but the ingredients remained the same.

“Being a careful label reader doesn’t help that much,” says Barbara Cozzens, executive director of Capital Animal Care in Arlington, Virginia. During a stint as an animal control officer in Washington, D.C., she saw the deadly effects of flea products firsthand. “Responding to a call, I encountered two kittens spinning in circles after being treated,” Cozzens says. “The dose given was in keeping with the recommendation on the label, yet clearly the kittens suffered severe neurological damage.”

Manufacturers do list active ingredients on packaging, but trademark laws allow them to keep secret so-called “inert” ingredients—dangerous petrochemicals and solvents such as benzene, toluene and xylene—even though they can make up 90 percent of the product. “Inert ingredients are not necessarily safe, nontoxic or even chemically inert,” says Maria Mergel of the Washington Toxics Coalition, a nonprofit organization in Seattle. “The term usually means only that these ingredients are not intended to kill fleas.”

Cozzens recommends controlling fleas the natural way. “It’s as simple as a flea comb, hot soapy water and a good vacuum cleaner.” Another often-recommended home remedy is seasoning your pet’s favorite chow with brewer’s yeast and garlic—natural flea repellants. “You should also keep in mind that a healthy pet is more resistant to fleas,” says Cozzens. With this in mind, she says she switched from commercial pet food, which often contains dangerous additives and preservatives—labeled as BHA and BHT—to certified organic pet food. “It also helps the environment when farmers don’t use pesticides on crops or feed antibiotics to cows and chickens, furthering the creation of a drug-resistant ‘superbug,’” she says.

BUYER BEWARE: FLEA MEDS
When it comes to flea medications for your pets, avoid products with dangerous ingredients such as carbaryl, permethrin, propoxur, DDVP and diazinon, an insecticide used on golf courses until the EPA banned it in 1988 after linking it to the deaths of ducks and geese. It’s still added to flea products and can cause long-term health problems in pets and people, according to the National Toxics Program. Safer but still effective are products containing imidacloprid and fipronil, which have not shown adverse effects on animals, says Beyond Pesticide’s Shawnee Hoover. “Even better, try citrus oil extracts containing D-limonene and linalool. Both are natural alternatives to chemicals and have received positive reviews,” she says. One last point to ponder: Children are considered especially vulnerable when exposed to pesticides because of their small size and tendency to put unwashed hands in their mouth.

Cozzens, like many other cat caretakers today, also uses more eco-friendly cat litter. Not so long ago, the only litter around was clay—which is strip-mined and laden with silica dust, a known human carcinogen, according to the International Agency for Research on Cancer. But today, choices abound. Some litter is made from post-consumer recycled material such as newspaper. Others are made from sawmill scrap or plants such as wheat, corn or kenaf. “If it’s biodegradable, it’s better for the environment,” says Cozzens. That’s especially true given that an estimated 2 million tons of nonbiodegradable cat litter ends up in U.S. landfills each year, according to the Waste Reduction and Management Institute.

But for California’s threatened sea otters, it’s better the litter ends up buried in the ground than in Morro Bay, where at least one otter found near death last April recently returned—after a weeks-long stint in rehab. “Sadly, most of them don’t get a second chance,” says Mike Murray, head veterinarian at the Monterey Bay Aquarium. “This one got lucky.”

If flushing cat litter down the toilet is a bad idea for the environment, flushing tropical fish might be even worse, according to a new study by the University of Washington and the Reef Environmental Education Foundation, a private conservation group. Off Florida’s southeast coast between 1993 and 2002, the researchers found 16 nonnative fish species, apparently set free from home aquariums.

Biologists have long suspected that intentional and unintentional aquarium releases into fresh water are a leading cause of invasions by tropical fish, which may prey on native species or endanger them by introducing parasites. But the link had never been proved despite increased sightings of exotic species, such as a pair of Pacific orbicular batfish found at the Florida Keys National Marine Sanctuary this summer. The study ruled out the possibility that the fish hitchhiked in ballast water, because the home ranges of the fish do not overlap with shipping routes. Most of the exotic invaders—such as raccoon butterfly fish, tang and angel fish, and lionfish—come from the Red Sea and the Pacific and Indian Oceans. All are popular in the aquarium trade. The moral of the story: If you have an aquarium stocked with tropical fish, don’t flush.—Heidi Ridgley