The jabiru stork is the epitome of South American splendor 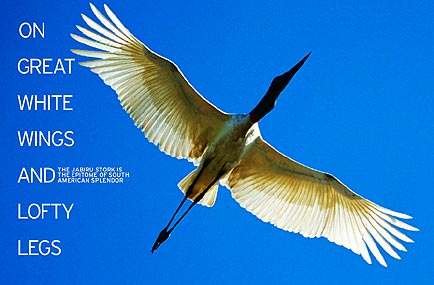 STANDING TALL against the backdrop of the world’s largest wetland, the jabiru stork looks like a creature straight out of the Jurassic. Nearly five feet of feathers and beak, this imposing figure in a white suit and flashy red necktie dwarfs the other avian waders drawn to the Pantanal’s rich waters. Usually spotted alone or in pairs, jabirus are so abundant in this region, which extends through parts of Brazil, Bolivia and Paraguay, that it’s possible to see dozens of their ivory bodies spread out across the watery expanse.

Some stand motionless, patiently waiting for an unwary fish to swim within striking distance. Others slowly wade through the marsh, jerking their heads and jabbing their ebony, foot-long beaks in the mud.

Should two of these feathered monsters collide, beaks clash in a concert of hollow notes, necks flaunt ruby red flesh and heads bob and sway in a wobbly, territorial battle. But most often, the jabirus are docile creatures. 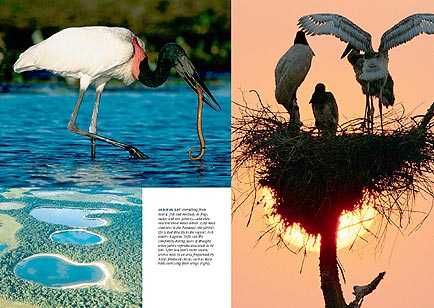 Nature photographer Theo Allofs visited the Pantanal several times over a period of three years to fully capture the jabiru’s intriguing life. Drawn to the sheer enormity of the stork’s eight-foot wingspan sailing across the blue sky and the daily avian soap operas set on sky-high stages made of twigs and dry grasses, he endured scorching temperatures and relentless mosquitoes while keeping a close, camera-shrouded eye on several jabiru families. Some of his most rewarding images are displayed here.

Rene Ebersole is an associate editor of this magazine