Seeing the Future Through the Trees 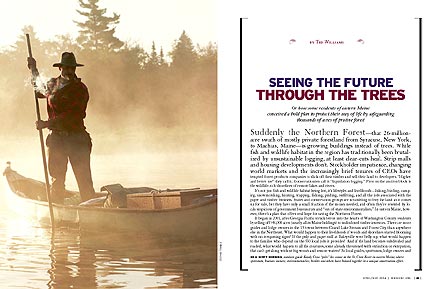 SUDDENLY THE NORTHERN FOREST—that 26-million-acre swath of mostly private forestland from Syracuse, New York, to Machias, Maine—is growing buildings instead of trees. While fish and wildlife habitat in the region has traditionally been brutalized by unsustainable logging, at least clear-cuts heal. Strip malls and housing developments don’t. Stockholder impatience, changing world markets and the increasingly brief tenures of CEOs have tempted forest-products companies to slick off their timber and sell their land to developers. “Higher and better use” they call it. Conservationists call it “liquidation logging.” First on the auction block is the wildlife-rich shorelines of remote lakes and rivers.

It’s not just fish and wildlife habitat being lost, it’s lifestyles and livelihoods—hiking, birding, camping, snowmobiling, hunting, trapping, fishing, guiding, outfitting, and all the jobs associated with the paper and timber business. States and conservation groups are scrambling to buy the land as it comes up for sale, but they have only a small fraction of the money needed, and often they’re resented by locals suspicious of government bureaucrats and “out-of-state environmentalists.” In eastern Maine, however, there’s a plan that offers real hope for saving the Northern Forest.

It began in 2001, after Georgia Pacific struck terror into the hearts of Washington County residents by selling off 446,000 acres (nearly all its Maine holdings) to undisclosed timber investors. There are more guides and lodge owners in the 13 towns between Grand Lake Stream and Forest City than anywhere else in the Northeast. What would happen to their livelihoods if woods and shorelines started blooming with no-trespassing signs? If the pulp and paper mill at Baileyville went belly-up, what would happen to the families who depend on the 550 local jobs it provides? And if the land becomes subdivided and roaded, what would happen to all the creatures, some already threatened with extinction or extirpation, that can’t get along without big woods and remote waters? So local guides, sportsmen, lodge owners and environmentalists formed an alliance called the Downeast Lakes Land Trust for the purpose of purchasing and protecting the 27,000-acre Farm Cove Peninsula that juts 12 miles up the southwest shore of West Grand Lake. The price will be $12.5 million.

The group had no experience with fund-raising or land acquisition, so it turned to the New England Forestry Foundation (NEFF), which had just nailed down the biggest conservation easement in U.S. history, raising $32 million in two years to protect 762,000 acres of forestland in northern and western Maine owned by the Pingree family. NEFF suggested the land trust collaborate with it and that, together, they embark on a more ambitious project: The Farm Cove Peninsula would be purchased as planned, but conservation easements would be acquired on an additional 315,000 acres at a cost of $13 million. Permanently protected would be 78,000 surface acres on 60 lakes, 445 miles of lake shoreline, 1,500 miles of river and stream shoreline, and 54,000 acres of wetlands.

In March 2003 the Downeast Lakes Forestry Partnership, as NEFF and the land trust now call themselves, and another member—the Woodie Wheaton Land Trust—completed the first phase with the $3.2 million purchase of a 500-foot wildlife corridor/buffer along 13 miles of Spednic Lake’s southern shore and 36 miles along the southern bank of the St. Croix River. The timing was perfect because, on the north side of Spednic and the St. Croix, the Province of New Brunswick had just bought and protected 390,000 acres of Georgia Pacific’s Canadian holdings.

“This is a wildlife story more than the other big forestland-conservation projects underway in the Northeast,” declares Eric Palola, director of NWF’s Northeastern Natural Resource Center in Vermont. “You’ve got the coastal influence. You’ve got the headwaters of several major river systems and that big expanse of protected land in New Brunswick. It’s right in the middle of flyways for migratory birds. There’s all this unspoiled riparian shoreline along with incredibly productive wetlands.” 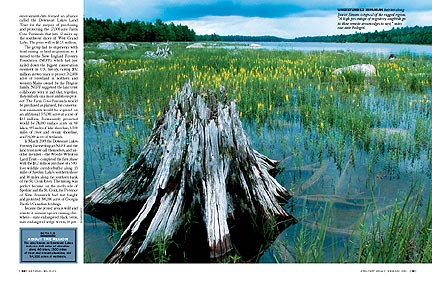 Tom Schaeffer, regional biologist for the Maine Department of Inland Fisheries and Wildlife, agrees. “This is going to have a large-scale benefit for most indigenous species,” he says. “There is major focus on riparian habitats. A high percentage of migratory songbirds go to these remote stream edges to nest. And studies show that a lot of wildlife, especially species resident year-round, depend on travel corridors that follow streams. By establishing good buffers along these streams the project will provide travel opportunities and winter shelter for a host of wildlife.”

I got a sense of the biodiversity of the project area when I toured it last July with representatives the Downeast Lakes Land Trust. In one of the wetlands slated for protection I saw a cow moose and her calf grazing on aquatic vegetation. Wading and paddling down Tomah Stream, which feeds Grand Lake Flowage, I encountered all manner of caddis fly nymphs. Tomah Stream sustains the highest caddis diversity ever found in the United States. It’s also home to the state-threatened Tomah mayfly, one of the few predatory members of the order. This rich insect fauna, in turn, sustains exceptionally large brook trout.

As we moved toward Grand Lake Flowage we flushed ruffed grouse, raptors and herons and, from the shallows, frogs, crawfish, muskrats, fallfish and chain pickerel. The black-winged damselflies called ebony jewelwings fluttered around us like ashes.

From my cabin bunk at Leen’s Lodge on West Grand Lake I heard barred owls and listened to loon music echoing from one distant shore to another like the rumble of expanding ice. In the morning, from the porch, I watched mergansers, black ducks, pileated woodpeckers, ospreys, tree swallows and, 15 feet below the surface over clean granite, copper-flanked, ruby-eyed smallmouth bass. These fish more than any other species are what keeps the sporting lodges and guides in business.

I caught smallmouths in front of the lodge and in nearby Big Lake from a “Grand Laker,” poled by guide Chris Wheaton, one of only two people who still build these traditional square-ended, cedar-and-ash canoes. The wildlife made it difficult to concentrate on my fishing. “The obnoxious loon,” as Wheaton called it, shadowed us, eyeballing my fly rod and surging toward us each time it bent in an effort to spare me the trouble of releasing bass. An immature bald eagle appeared through the mist, flying low over spruce and fir trees. Herons and kingfishers worked the marshy shoreline.

While the smallmouth fishing in these lakes is unexcelled east of the St. Lawrence River, smallmouth bass are ubiquitous and easily had in other cool-water habitat. You don’t need to trek almost to the Canadian border to find them. But anglers come here from all over the world. It took the guides, who at first fretted just about access, a while to figure out why. Smallmouths are resilient and adaptable; no way was a hatch of docks, diving rafts, jet skis and powerboats going to affect the population. But gradually, the guides realized that it wasn’t just the fish that attracted anglers; it was the chance to chase them in wild, remote, quiet settings where you cast from Grand Lakers instead of beeping, belching, garish bass boats, and where the air is scented with balsam instead of gasoline fumes. If this land were subdivided and sold for second homes, they’d be out of business no matter how good the fishing was. So it was the guides who got the Downeast Lakes Land Trust going. 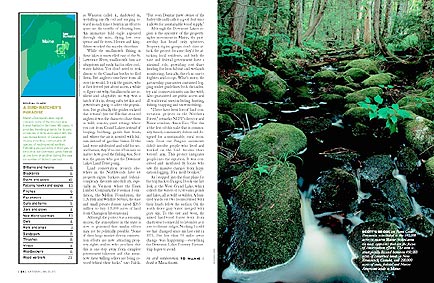 Land conservation projects elsewhere in the Northwoods have set property-rights barkers and federal-conspiracy theorists into full cry, especially in Vermont where the Essex Timber Company, the Freeman Foundation, the Mellon Foundation, the U.S. Fish and Wildlife Service, the state and small private donors raised $26.5 million to buy 133,000 acres of land from Champion International.

Although the project was a stunning success, the atmosphere in the state is now so poisoned that similar efforts may not be politically possible. “Some of these large market-driven conservation efforts are now attracting property-rights zealots who proclaim that this is one step away from complete government takeover and that somehow these willing sellers are being coerced behind their backs,” says Palola. “But even Domtar [new owner of the Baileyville mill] calls it a good deal since it allows for a sustainable wood supply.”

Although the Downeast Lakes region is the epicenter of the property-rights movement in Maine, the partnership has heard only splutters. Property-rights groups don’t dare attack the project because they’d be attacking local residents, and both the state and federal government have a minimal role, providing cost share funding for loon habitat and wetlands monitoring. Basically, there’s no one to frighten and co-opt. What’s more, the partnership guarantees continued logging under guidelines both the industry and conservationists can live with. Also guaranteed are public access and all traditional uses including hunting, fishing, trapping and snowmobiling.

“There have been lots of land conservation projects in the Northern Forest,” remarks NEFF’s director and Maine resident, Amos Eno. “But this is the first of this scale that is community based, community driven and designed for a sustainable, rural economy. Even our Pingree easements didn’t involve people who lived and worked on the land because there weren’t any. This project integrates people into the equation. It was conceived and incubated by locals who saw the massive changes from liquidation logging. It’s a mold breaker.”

As I stepped into the float plane for the trip back to Bangor, I took one last look at the West Grand Lake, which collects the waters of 32 streams, ponds and lakes, all as wild or wilder. A hundred yards out two loons cruised with their heads below the surface. On the north shore gray water merged with gray sky. To the east and west, the mixed hardwood forest went from chartreuse to emerald to lavender as it rose to distant ridges. Nothing I could see had changed since my last visit in 1973. But less than 50 miles away change was happening—everything the Downeast Lakes Forestry Partnership hopes to avoid.

An avid outdoorsman, Ted Williams is based in Massachusetts.

NWF Priority: Protecting the Downeast Lakes
As part of its ongoing efforts to promote sustainable forestry and protect wildlife habitat in New England's vast Northern Forest, NWF has joined the Downeast Lakes Forestry Partnership to safeguard 342,000 forested acres in eastern Maine. To find out more about the campaign and what you can do to help, see www.newenglandforestry.org. For more about the Northern Forest, see www.nwf.org/northernforest.

Special Place: A Bird-Watcher’s Paradise
Maine's Downeast Lakes region contains some of the most pristine boreal habitat in the lower 48 states. It provides breeding grounds for dozens of species of birds associated with the vast boreal forests of Canada and Alaska, including a remarkable 23 species of nesting wood warblers. Following are just some of the types of birds that use Downeast Lakes habitat at one time or another during the year (in number of distinct species):