Streams such as North Carolina's Swift Creek are vital both to people and wildlife, a scientific truth often ignored by legislators who fail to protect them 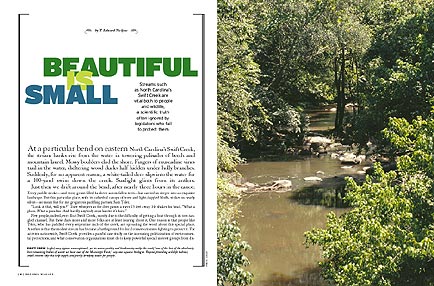 AT A PARTICULAR BEND on eastern North Carolina's Swift Creek, the stream banks rise from the water in towering palisades of beech and mountain laurel. Mossy boulders clad the shore. Fingers of muscadine vines trail in the water, sheltering wood ducks half hidden under holly branches. Suddenly, for no apparent reason, a white-tailed deer slips into the water for a 100-yard swim down the creek. Sunlight glints from its antlers.

Just then we drift around the bend, after nearly three hours in the canoe. Every paddle stroke—and every grunt-filled haulover across fallen trees—has carried us deeper into an exquisite landscape. But this particular place, with its cathedral canopy of trees and light-dappled bluffs, strikes us nearly silent—no mean feat for my gregarious paddling partner, Sam Toler.

"Look at that, will you?" Toler whispers as the deer passes a mere 15 feet away. He shakes his head. "What a place. What a paradise. And hardly anybody even knows it's here."

Few people, indeed, ever float Swift Creek, mostly due to the difficulty of getting a boat through its tree-tangled channel. But these days more and more folks are at least hearing about it. One reason is that people like Toler, who has paddled every serpentine inch of the creek, are spreading the word about this special place. Another is that the modest stream has become a battleground for local conservationists fighting to protect it. For activists nationwide, Swift Creek provides a painful case study on the increasing politicization of environmental protections, and what conservation organizations must do to keep powerful special interest groups from dismantling these protections one by one.

Streams such as Swift Creek, which appear unremarkable at first glance, provide critical habitat for a surprising diversity of plant and animal species. They are also critical links in healthy ecosystems and an absolute must for vibrant human communities. "There's a long list of things that small streams do for human populations," says Judy Meyer, a University of Georgia ecologist and coauthor of a recent report, Where Rivers Are Born: The Scientific Imperative for Defending Small Streams and Wetlands. For starters, small streams recharge groundwater supplies, the source of drinking water for a third of all U.S. citizens. "Even if you don't get your drinking water from groundwater supplies," Meyer explains, "stream-supplied water sustains the flow in much larger river systems, which are then tapped for human water use."

Beyond providing water, small streams also clean it. Most filtering and biological cleansing occurs at the bottom of small creeks, in what scientists call the hyporheic zone. There the greatest volume of water meets biologically active gravels, sands and detritus layers where nutrients are absorbed. "Only in the last 10 years have we learned how effectively smaller streams clean water," Meyer says. "They are a first line of defense against pollutants running off roadways and farm fields."

In many respects, Swift Creek in eastern North Carolina is a nondescript Piedmont stream similar to countless others that lattice North America's southeastern woodlands. It spills through a mosaic of forests and farm fields. Its pleasures are sublime—massive beech trees and picturesque beaver dams, the squealing of wood ducks (above), the glint of fish in the shallows.

But if its pleasures are muted, Swift Creek's treasures are not. Its water quality in the heavily settled East is rare: In the stream's 90-plus miles there are fewer than a half-dozen point sources of pollution. Fourteen miles of the lower watershed boast more than 60 fish species, 15 freshwater mussel species, 15 snail species and 7 crayfish species—more crayfish, in fact, than many other states can claim of their entire waters. Among this diversity are 14 state and federally listed rare, threatened and endangered species and 4 endemic animals that are found nowhere else in the world.

The impacts of degraded streams can show up miles—or hundreds of miles—away. "If you're concerned about the sedimentation of drinking water reservoirs, you should be concerned about the health of upstream creeks and wetlands," says Meyer. "We're even starting to recognize that some coastal issues have their roots far up river networks. The alarming so-called dead zones that are showing up in the Gulf of Mexico could have their genesis in the destruction of small streams and wetlands in Iowa."

Fortunately, Swift Creek remains a stream that is very much alive—at least so far. For nearly 15 years, local conservationists have been working to have the creek's clean waters protected by the state government. Over that time every state agency, scientist and environmental group that has taken time to look has agreed that Swift Creek is very nearly one of a kind. "It's one of the last of the absolutely best remaining bodies of water we have east of the Mississippi River," says John Alderman, an aquatic biologist and former head of the state's endangered species protection efforts.

Finally, in 2002, the state's Environmental Management Commission designated a 14-mile segment of Swift Creek as an Outstanding Resource Water, or ORW, giving all waters in its 270-square-mile watershed added protections. Such a designation, though important, carries only minimal regulations, including a prohibition on new pollution discharges and requirements for modest stormwater controls on new developments in the basin. At least as importantly, the ORW label puts a body of water on the map as a place needing special care.

Yet in the waning days of the state's 2003 General Assembly session, lobbying by special interest groups—particularly the North Carolina Home Builders Association—convinced legislators to strip ORW protections from the lower one-third of the Swift Creek watershed. "The state was using outdated data," says Lisa Martin, director of regulatory affairs for the industry group. "In effect, it was abusing its own water quality designation process."

But David McNaught, a scientist with Environmental Defense, calls the move "devastating." The ORW protections, he says, had been crafted by the state's own environmental management body after years of input from experts and the public. "In revising the rule, the legislature ignored both good science and public opinion," says McNaught. "It just shows that elected leaders often set aside the interests of the general public to meet the wishes of private interests."

Nationwide, similar legislative gutting of local environmental protections is an alarming trend, says Mary Alsentzer, executive director of the Pamlico-Tar River Foundation. "This is happening all over the country. What happened to Swift Creek should resonate with individuals, agencies and organizations anywhere that are concerned about water quality and wildlife habitat."

Wetlands and small streams like Swift Creek are of particular concern. The Bush administration recently abandoned efforts to eliminate Clean Water Act protection for more than half the nation's waters, but left in place confusing—and alarming—guidelines to federal regulators who guard the nation's streams, rivers and wetlands. A so-called "guidance memo" to those regulators puts some 20 million acres of wetlands, small streams and other waters in immediate jeopardy of pollution and development. "Nearly 150,000 bird-watchers, hunters, backpackers, anglers, canoeists and backyard wildlife lovers wrote the Bush administration about dropping its frontal assault on the Clean Water Act," says Julie Sibbing, an NWF water policy specialist. "But now those same waters are threatened by a separate policy that encourages regulators to look the other way. It's death by a thousand cuts to wetlands and small streams."

Streams especially cannot afford half-measures at protection. Their low water flows leave them vulnerable to catastrophic events such as spills. Their small size and seeming ubiquity may lead some to believe they are unimportant.

"It's so easy to kill a creek like this because it has no voice of its own. It can't tell you when it's hurting," says Toler, as the shadow of a hawk glides eerily across the water. "But think about what this creek would say if these waters could talk. All the pretty places they've been, the fish and mussels and otters they've seen. I'd love to hear it all."

Drifting along, matching pace with palm-sized basket oak leaves twirling in the creek's eddies, it occurs to me that Swift Creek might have something else to say: "Please. Help."


Freshwater creeks and small wetlands "are the most endangered habitats on Earth," says aquatic biologist John Alderman. They are also among the most important habitats to humans and wildlife. Here are a few reasons why:


Small streams make up at least 80 percent of the nation's stream network.

Small streams in the Southern Appalachian Mountains remove phosphorus and ammonium from water after traveling less than 65 feet downstream.

In a study of 14 small streams scattered across the country, an average of 64 percent of inorganic nitrogen entering the water was retained or transformed within 1,000 yards.

Insectivorous birds along a prairie stream in Kansas consumed nearly nine out of ten aquatic insects emerging from the creek each day.

Ninety-six percent of the stream miles in Arizona are classified as ephemeral or intermittent.

Small wetlands that dry out during part of the year, called vernal pools, host entire communities of fragile plants and animals. California's vernal pools support at least 44 species of plants that would vanish without the wetlands. In South Carolina, a single 1.2-acre ephemeral wetland is home to 27 species of amphibians alone.

Fens protect downstream trout habitat by trapping excess nutrients from farmfield runoff and urban lawns. In northeastern Iowa, fens cover 1 percent of the land surface but contain 18 percent of the state's plant species.
Source: Where Rivers Are Born: The Scientific Imperative for Defending Small Streams and Wetlands, published in 2003 by American Rivers and the Sierra Club