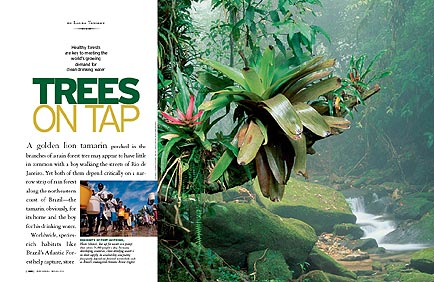 A GOLDEN LION TAMARIN perched in the branches of a rain-forest tree may appear to have little in common with a boy walking the streets of Rio de Janeiro. Yet both of them depend critically on a narrow strip of rain forest along the northeastern coast of Brazil—the tamarin, obviously, for its home and the boy for his drinking water.

Fact
Forest Power
A single mature tree growing on the banks of a river or stream can filter as much as 200 pounds of nitrate runoff per year.

Worldwide, species-rich habitats like Brazil’s Atlantic Forest help capture, store and purify the water that supplies dozens of major metropolitan areas. According to a report from the World Bank-WWF Alliance for Forest Conservation and Sustainable Use, more than a third of the planet’s 105 largest cities—including Bangkok, Nairobi, Melbourne, Barcelona and New York City—rely on protected forests for all or some of their drinking water. Yet as human populations grow, particularly in urban areas, pressure to raze or exploit these forests is mounting. "For many cities, time is running out," says David Cassells, a senior environmental specialist for the World Bank. "Protecting forests around water catchment areas is no longer a luxury but a necessity." 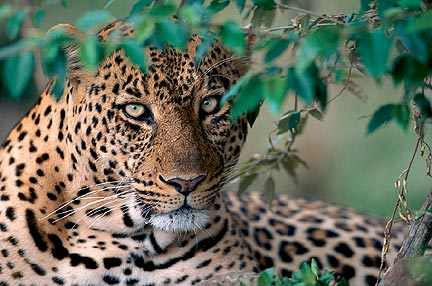 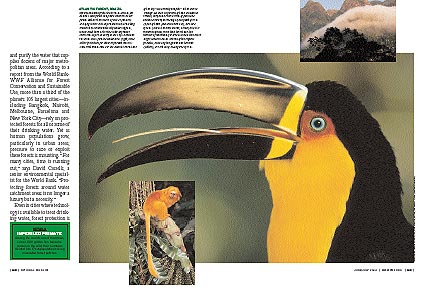 Even in cities where technology is available to treat drinking water, forest protection is often a cheaper alternative. Take New York City, where water quality fell below federal standards during the late 1990s. Rather than spend between $6 billion and $8 billion to build a new water treatment plant—with an annual operating cost of $300 million to $500 million—city officials opted to pay $1.5 billion over the following decade to purchase, protect and better manage forests in the Catskill Mountains, enhancing the natural water purification services they provide.

Cities in developing countries, however, face far greater challenges than wealthy ones like New York. In these nations, about a billion people lack access to safe drinking water: some 700 million in Asia, 150 million in Africa and 120 million in Latin America and the Caribbean. Each year, about 2 million children under age five die of waterborne diseases, mostly diarrhea, the equivalent of one death every 15 seconds. 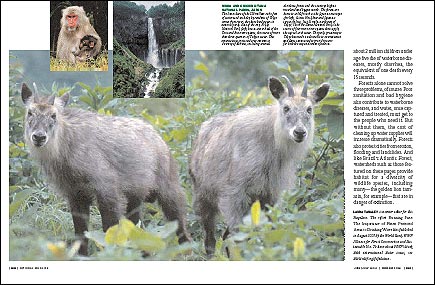 Forests alone cannot solve these problems, of course. Poor sanitation and bad hygiene also contribute to waterborne diseases, and water, once captured and treated, must get to the people who need it. But without them, the cost of cleaning up water supplies will increase dramatically. Forests also protect cities from erosion, flooding and landslides. And like Brazil’s Atlantic Forest, watersheds such as those featured on this page provide habitat for a diversity of wildlife species, including many—the golden lion tamarin, for example—that are in danger of extinction.

Laura Tangley is a senior editor for this magazine. The report Running Pure: The Importance of Forest Protected Areas to Drinking Water was published in August 2003 by the World Bank-WWF Alliance for Forest Conservation and Sustainable Use. Learn about NWF’s work with international water issues .

Details
Imperiled Primate
Among the world’s rarest mammals, some 1,000 golden lion tamarins remain in the wild, their numbers divided into 17 subpopulations living in isolated forest patches.