Untamed Lands at the End of the Road

A cause for celebration: This fall marks the 40th anniversary of the federal Wilderness Act, which has helped ensure that roadless lands survive as a legacy for future generations 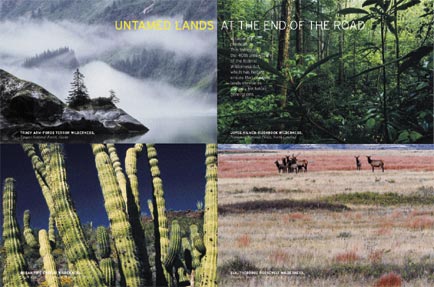 AS THE FORESTER Aldo Leopold might have put it, there are some people who can live without blanks on the map and some who cannot. He was one who could not. From his fertile mind three-quarters of a century ago came the extraordinary idea that some of the blanks should be set aside—"devoid of roads—or other works of man"—for public recreation. And out of that idea sprang the world's first program for protecting roadless country. Created by an act of Congress and signed into law by President Lyndon Johnson on September 3, 1964, the National Wilderness Preservation System has grown from an initial 9.1 million acres in 13 states to more than 100 million acres in all but 6 of the 50 states. So we have much to celebrate on the system's 40th anniversary but also much to lament. For never in the past 40 years has wild America faced such a perilous future or suffered the authority of such unfriendly stewards.

Wilderness—designated or de facto—has always been a piece of the fabric of my life, even now that the years have made of me a windshield tourist who can do no more than drive to its edge and look in. But I am blessed with splendid memories from younger, stronger times: Of a horseshoe valley tucked way up in the Brooks Range of Alaska, in the Mollie Beattie Wilderness, where the Hulahula River begins its twisting way to the sea, and the slopes above it are speckled with Dall sheep. Of a waterfront campsite on a wilderness island named Kootznoowoo, meaning, in the Native Alaskan Tlingit tongue, "Fortress of the Bears," the bears being coastal grizzlies grazing just across the way on spawned-out salmon. Of star-spangled skies above the redrock canyons of the Dirty Devil River in southern Utah and the Middle Fork Gila in New Mexico (the U.S. Forest Service's first designated roadless area, circa 1924, thanks to Aldo Leopold). Of a curious encounter with a marmot, on the trail to the top of a 13,000-foot peak in what is now the Sequoia-Kings Canyon Wilderness of California. Of the rich autumnal palette of maple reds and birch yellows in the Pemigewasset Wilderness of New Hampshire's White Mountain National Forest. 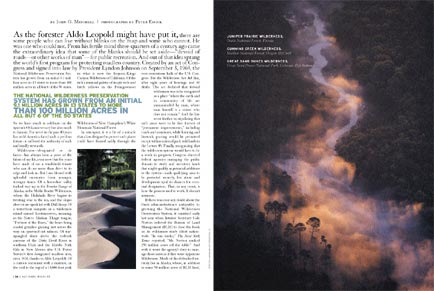 In retrospect, it is a bit of a miracle that a law designed to protect such places could have floated safely through the ever-contentious halls of the U.S. Congress. But the Wilderness Act did that, after eight years of hearings and 66 drafts. The act declared that federal wilderness was to be recognized as a place "where the earth and its community of life are untrammeled by man, where man himself is a visitor who does not remain." And the law went further in stipulating that such areas were to be free forever of "permanent improvements," including roads and structures, while hunting and livestock grazing would be permitted except within national park wildlands in the Lower 48. Finally, recognizing that the wilderness system would have to be a work in progress, Congress directed federal agencies managing the public domain to study and inventory lands that might qualify as potential additions to the system—each qualifying area to be protected securely, lest abuse and development spoil its chances for eventual designation. That, in any event, is how the process used to work. It doesn't anymore.

NWF and its state affiliates seek to protect the nation's 700 million acres of public lands and to preserve healthy ecosystems on national forests, parks, wildlife refuges, wilderness areas, monuments and rangelands. Working with the affiliates, NWF is supporting several congressional bills designed to expand the wilderness system by designating wilderness in areas such as New Mexico's Otero Mesa, Puerto Rico's El Yunque and Washington State's Wild Sky. NWF is dedicated to ensuring that public lands will continue to inspire the nation's residents and to sustain its most remarkable wildlife and wild places. To learn more about NWF wilderness efforts, visit NWF's Wildlife Section.

If there was ever any doubt about the Bush administration's antipathy to growing the National Wilderness Preservation System, it vanished early last year when Interior Secretary Gale Norton ordered the Bureau of Land Management (BLM) to close the book on its wilderness study effort nationwide. "In one stroke," The New York Times reported, "Ms. Norton yanked 250 million acres off the table." And with it went the agency's duty to manage those acres as if they were uppercase Wilderness. Much of the defrocked territory lies in Alaska, where, in addition to some 50 million acres of BLM land, Norton is mulling the possibility of excluding from wilderness consideration 100 million acres within the national parks and wildlife refuges there.

In this sort of political climate, there's more than one way to skin the system. There is RS2477, an obscure provision of a repealed 19th-century mining law that invites states and counties to claim archaic rights-of-way and then bulldoze them across hitherto roadless portions of federal land. There is the threatened rollback of President Clinton's Roadless Area Conservation Rule, which would have prevented road construction and logging on almost 60 million acres of unroaded national forest land. And there's the administration's obsession with accelerating energy development throughout the wild backcountry of the West—as in the proliferation of roads, drill pads and natural gas pipelines that are fragmenting the heart of Wyoming's pronghorn and sage grouse habitat. 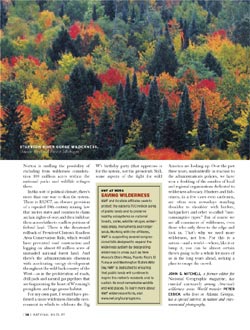 For my own part, I would have preferred a more wilderness-friendly environment in which to celebrate the Big W's birthday party (that uppercase is for the system, not the president). Still, some aspects of the fight for wild America are looking up. Over the past three years, undoubtedly in reaction to the administration's policies, we have seen a doubling of the number of local and regional organizations dedicated to wilderness advocacy. Hunters and fishermen, in a few cases even cattlemen, are often seen nowadays standing shoulder to shoulder with birders, backpackers and other so-called "non-consumptive types." But of course we are all consumers of wilderness, even those who only drive to the edge and look in. That's why we need more wilderness, not less. For this is a nation—and a world—where, like it or lump it, you can be almost certain there's going to be a whole lot more of us in the long years ahead, seeking a place to escape the crowd.

Web Exclusive
The Invention and Preservation of Wilderness

Once upon a time, about ten or fifteen thousands years ago, there was no wilderness. Humankind had not yet invented it as a concept, primarily because people then lived as hunting and plant-gathering creatures in a world in which nature gave – in the form of meat and wild food plants – and nature took away — in the form of harsh winters, drought and other conditions that yielded food scarcities.

At about that time, however, this system started to change. People in certain parts of the globe – the Middle East and Southeast Asia, for example – struck upon the idea of planting crops. The next thing they knew, they were raising pigs, sheep, goats and cattle for food, using dogs and horses for labor, and cultivating maize, wheat, rice and myriad other crops. They were putting borders around their fields, and they were dividing the world into domesticated landscapes and wild lands, or wilderness.

As agricultural peoples grew increasingly dependent on crops and livestock, the contrast between the wilderness and the cultivated fields grew. Wilderness came to be seen as dangerous. The Judeo-Christian tradition, for example, made wilderness a place of punishment – the individual "whose heart departeth from the Lord," wrote Jeremiah, ". . . shall inhabit the parched places in the wilderness, in a salt land and not inhabited." Or worse: According to the New Testament, when Christ went into the wilderness, who should visit him but Satan, with a litany of temptations.

Little wonder that in Puritan New England, in the 17th and early 18th centuries, the wilderness became a metaphor for evil, a place haunted by dragons, devils and "fiery flying serpents," according to the minister Cotton Mather. The forests and prairies were places to be cut and plowed, the wilderness pushed back.

And so it was, until the 1800s, when Americans abruptly noticed that forests and unscathed mountains were excellent places for retreating from the busy, work-a-day world. Henry David Thoreau set the stage in mid century when he wrote, "We can never have enough of nature. We must be refreshed by the sight of inexhaustible vigor, vast and titanic features, the sea-coast with its wrecks, the wilderness with its living and its decaying trees, the thunder-cloud, and the rain which lasts three weeks and produces freshlets. We need to witness our own limits transgressed, and some life pasturing freely where we never wander."

Unfortunately, Americans failed to make this discovery about the value of wilderness until many of the best wilderness areas had been logged or plowed. Nevertheless, they set to work to save wilderness, although not until the 1930s did a group of wilderness enthusiasts gather formally to promote the idea of protecting trackless areas in national forests and other public lands by keeping out permanent roads and human structures. Even so, the effort to provide federal protection for wilderness did not really take off until conservationist Howard Zahniser – noted among his colleagues for his wit and for satiric poetry in iambic pentameter – in 1956 drafted a bill to create a national wilderness system in which permanent human development would be banned.

After nearly a century of preparation, the nation was ready to protect its wildest lands, which is why it took only another eight years to pass the bill, which went through 66 incarnations and was the subject of nine separate hearings and more than 6,000 pages of testimony. The Forest Service, expecting to provide the bulk of the new wilderness areas, wanted no part of a plan that did not allow logging. The National Park Service was insulted by the implication that it was not already doing everything possible for wilderness—although Zahniser pointed out that the park service was too avid a builder of roads, bridges, lodges and souvenir stands to protect wilderness the way wilderness advocates wanted it protected. Consumptive land users, such as ranchers, loggers and miners, also opposed the bill(s).

But when the Senate conducted hearings on the law it received 1,003 letters supporting it and only 129 against it. The Senate passed the bill on April 10, 1963, by a vote of 73 to 12. In July, 1964, the House passed it by a vote of 373 to 1. President Lyndon Johnson signed the bill in September. Zahniser, who had penned the Wilderness Act, did not live to see the day, however. He had died on May 5, 1964, only a week after he had made his final congressional testimony on behalf of the bill. But he left behind a law that provided that the nation would protect areas "where the earth and its community of life are untrammeled by man, where man himself is a visitor who does not remain" – the National Wilderness System. --Roger Di Silvestro