U.S. water sources are under increasing pressure as population centers grow, but industries and individuals are taking measures to keep the faucets flowing 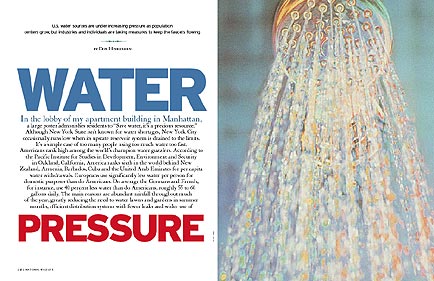 IN THE LOBBY of my apartment building in Manhattan, a large poster admonishes residents to "Save water, it’s a precious resource." Although New York State isn’t known for water shortages, New York City occasionally runs low when its upstate reservoir system is drained to the limits. It’s a simple case of too many people using too much water too fast.

Americans rank high among the world’s champion water guzzlers. According to the Pacific Institute for Studies in Development, Environment and Security in Oakland, California, America ranks sixth in the world behind New Zealand, Armenia, Barbados, Cuba and the United Arab Emirates for per capita water withdrawals. Europeans use significantly less water per person for domestic purposes than do Americans. On average the Germans and French, for instance, use 40 percent less water than do Americans, roughly 55 to 60 gallons daily. The main reasons are abundant rainfall throughout much of the year, greatly reducing the need to water lawns and gardens in summer months, efficient distribution systems with fewer leaks and wider use of devices such as low-flush toilets.

What Kind of Water User Are You?


Answer the following simple questions to see where you rank on the water-conservation meter.

How many times a week do you wash a load of clothes?
Once a week: 1 point
Twice a week: 2 points
Three times a week: 3 points
Every day: 5 points

When you brush your teeth, shave or wash up in the sink, do you:
Turn the faucet on and off as needed for rinsing or washing up: 1 point
Leave the water running: 5 points

How soon do you fix leaky water pipes or garden hoses?
As soon as leaks are noticed: 1 point
Within a week: 3 points
Whenever I get around to it: 5 points

How much of your property is xeriscaped (covered with water-efficient, indigenous vegetation)?
More than 50 percent: 1 point
30–50 percent: 2 points
Less than 30 percent: 3 points
None: 5 points
None, I don’t have a yard: 0 points

Your rating is as follows:

The lower the score the more water efficient you are.
If your total is between 5 and 11, congratulations, you are a real water saver!
If your total is between 12 and 19, congratulations, you are water conscious and may become a real water saver some day!
If your score is between 20 and 29, you’re using too much water for your actual needs, which makes you, unfortunately, a normal water user! Try cutting back on the number of loads of wash per week (do full loads instead of partial loads) and on the length of time you shower; save dishes for one big wash per day in your dishwasher, or, if you wash by hand, do so in a basin, and turn on the tap only for rinsing; cut down on lawn and garden watering.
If your total is 30 or more, you’re a water waster. Put a plug in it!


But the good news is that, overall, America’s water use is dropping. The U.S. Geological Survey (USGS) reported this year that the nation withdrew 408 billion gallons of freshwater every day from surface and groundwater, about a 2 percent decrease from 1990 and a 10 percent drop compared to 1980. Nationwide, per capita water use has dropped 25 percent from its peak in the 1970s. As might be expected, water conservation drives this trend. According to Deborah Lumia, a USGS hydrologist, "the downward trend in water withdrawals is a function of widespread water conservation measures, especially in industry and municipalities and to a lesser extent in agriculture."

In the United States, 45 percent of water supplies go to industry, 42 percent to agriculture and 13 percent to domestic purposes, including personal, household and municipal needs. The average American uses nearly 100 gallons of water daily for preparing food, bathing, washing clothes and dishes, flushing toilets and watering lawns and gardens. But we are finding ways to cut back.

For example, in the mid-1980s, when Boston was faced with spiraling demand for water and limited supplies due to drought, instead of tapping new sources and building costly tunnels to transport water, the Massachusetts Water Resources Authority opted for conservation. By the mid-1990s, the city’s water-conservation campaign was well on its way. The water authority provided more than 400,000 Boston-area households with water-saving devices—low-flush toilets, low-flow showerheads and low-volume faucets. Leaky water mains and pipes were repaired, saving 30 million gallons a day. Advice on water-saving technologies and measures also was made available to industries and businesses. The result: Between 1980 and 2003, Boston reduced its water demand by 31 percent, from 340 million gallons daily to 235 million, at a third the cost of tapping new supplies.

Writer Don Hinrichsen leads a water-efficient life simply by residing in a New York City apartment that has no lawn or garden. But like him, you also can save water by efficient practices in daily use. Shutting off the faucet while brushing your teeth can save a family of four about 800 gallons a month. Fixing leaky toilets could save another 500 gallons monthly. The quiz (above) shows how you can save on activities such as dishwashing.

New York City is another case in point. Since the early 1990s, New York has required all new housing developments to install low-flow showerheads and faucets and low-flush toilets, which require less than 3 gallons per flush, as compared to 6 in normal toilets. Between 1994 and 1997, the New York City Department of Environmental Protection sponsored a $297 million rebate program for residential and commercial customers that resulted in the installation of 1.3 million ultra-low flush toilets, which require just 1.6 gallons per flush. This program alone saved the city 70 million gallons a day. In addition, broken water mains and leaky pipes are repaired quickly. As a result, like most Manhattan residents, I use 40 percent less water than does my cousin living in a ranch-style house in the suburbs of Los Angeles.

How many gallons of water does it take to produce:

A serving of lettuce: 6

An average American’s food for a year: 1.5 million

Industry has been doing its part to conserve water, too. U.S. industrial water use fell more than a third between 1950 and 1990, while industrial output quadrupled over the same period. By 2003, industries were routinely reusing and recycling the same amount of water 17 times in production processes before discharging it, compared to 1.8 times in the mid-1950s. The rising cost of water and improvements in production processes (reducing overhead) continue to drive water savings in industry.

Spalding Sports Worldwide, the giant sporting goods manufacturer, is a good example of how companies are saving water. In the late 1980s, faced with dwindling water supplies at the company’s Boston-area plant following two years of drought, Spaulding initiated plans to cut water use in the facility’s production processes. Through a number of measures—mainly recycling cooling water for its machinery—the Spalding plant slashed its water use from 1.5 million cubic meters to 64,000 cubic meters, a 96 percent drop in three years. Although this plant recently was sold and renamed the Top Flite Gold Company, it has continued Spalding’s water-saving innovations. According to engineer Bill Sweetman, Top Flite even uses rainwater collected off the roof to compensate for water lost in the production process.

Agricultural efficiencies lag far behind the savings in industry, but improvements in irrigation techniques, such as drip irrigation and low-energy precision application, can achieve efficiencies as high as 95 to 98 percent, which means that up to 98 percent of the water withdrawn for irrigation actually reaches the crops. Normal irrigation efficiencies are no more than 50 percent—half the water is lost in transit. These new techniques are saving farmers millions of gallons of water in Texas, the Southwest and southern California.

Despite gains in water conservation across the United States, hot spots of water overuse still plague the nation, whether in the dry regions of the Southwest (see the article "Last in Line") or even in more unlikely areas. The last place we might expect to encounter a water shortage is Florida. Yet, Tampa on the Gulf Coast is constructing a massive $100 million desalination plant in order to provide its residents with clean water for household use. Prolonged drought in the region coupled with population growth, diminishing groundwater supplies, inefficient use and increasing competition from agriculture prompted the city to opt for desalination. When completed, the desalination plant will be the largest in the Western Hemisphere. "We’re under high growth, and all of the traditional water supplies have been tapped out," says Sonny Vergara, executive director of the Southwest Florida Water Management Bureau. "So we must come up with alternative supplies."

Many U.S. rivers already are flash points for interstate disputes. The Colorado River, which flows through the southwestern United States and fed the explosive growth of Phoenix, Tucson and other southwestern desert cities, is now so depleted from constantly escalating irrigation and urban demands that its waters no longer reach the Gulf of California. Instead, the river trickles out in the desert south of the U.S.-Mexican border and is a constant source of bickering between the United States and its downstream neighbor.

"If we truly seek to ensure that the world has enough safe water in the future," says Amy Vickers, a water engineer and author of the Handbook of Water Use and Conservation, "then we must act more aggressively to preserve what we claim to hold dear. As we peer into the 21st century, water conservation is looking far more like an imperative than an option."

Don Hinrichsen, former editor-in-chief of Ambio magazine, is an environmental consultant to the United Nations.

Solutions
How to Save Water Inside Your Home

The amount of water used for domestic purposes depends on where the individual lives. The average resident of Los Angeles, California, uses 122 gallons of water daily, while a New York City resident averages 75 gallons (but the average for the State of New York is 112). In Iowa, the average resident uses just 65 gallons per day, but next door in Illinois the average is 90. But you can save water wherever you live. If the owners of a typical 10-year-old home installed water-efficient toilets, dishwaters and clothes washers, they could save 18,700 gallons yearly, the U.S. Department of Energy says. If every American home were outfitted that way, the annual savings would equal the average flow of the Mississippi River into the Gulf of Mexico for five days. Also, every month a family of four can save the following amounts by:

Fixing leaky faucets and toilets that flush themselves: 500 gallons

Running your washing machine only when it is full: up to 2,400 gallons

Keeping your shower under 5 minutes: up to 1,000 gallons

Ensuring that your toilet flapper isn’t sticking when flushing: 900 gallons or more

Turning off the water while you shave: more than 400 gallons