Where Would They Be Now? 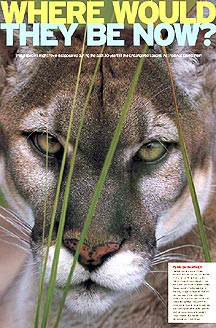 THE ENDANGERED SPECIES ACT, which President Nixon signed into law in December 1973, was not the first of its kind. Congress had enacted two similar laws, one in 1966 and another in 1969, but neither did much more than create lists of vanishing wildlife. The 1973 law put real teeth into protecting species likely to become extinct soon. In effect, it sought to make illegal the extinction of any species from human activities.

That goal may sound impractical, but the law is in fact pragmatic. By seeking to protect the habitat of listed species, by funding state endangered species work and by creating a system for assessing the damage that proposed projects might do to listed species, the law spells out a practical program for protecting America’s most jeopardized animals and plants.

Today the law protects more than 1,200 U.S. plant and animal species and more than 550 foreign species, some of which may provide us with such valuable assets as cures for serious illnesses and others of which simply add value to our lives through their elegance and beauty. Moreover, when we protect species, we protect habitat, and when we protect habitat—from wetlands to forests, from prairies to streams—we improve the health and safety of our own environment and that of myriad other species.

Nevertheless, the law is under assault from development interests that do not want to strike a balance with wildlife. Through their supporters in Congress and the White House, these interests seek to weaken the protections of the Endangered Species Act. They debunk the law as a failure.

As the following examples illustrate, however, the law has enjoyed demonstrable success in a relatively short time. "It took decades, in some cases centuries, to whittle away species after species until they ended up on the list," says NWF endangered species specialist John Kostyack. "Reversing that biological effect won’t happen overnight. But at only 30 years old, the Endangered Species Act has already scored major victories in species recovery."

On the 30th anniversary of the law last year, NWF and 10 other conservation groups compiled a list of 30 species that now would be much diminished or extinct if not for the law’s protection. Several of these species are featured on the following pages. "In creating the Endangered Species Act in 1973, Congress recognized that plants and animals don’t have to earn the right to exist, but rather that we have a responsibility to protect them," Kostyack says. "Each species is a monument to the effectiveness of the act and to those who, over the past three decades, have work to make the law a success for wildlife and for people in their communities."

Bald Eagle
As many as 100,000 bald eagles soared over the lower 48 states before Columbus reached the Americas. By 1963, hunting, habitat loss and pesticide contamination had cut the species to just 417 nesting pairs in the continental United States. Under the Endangered Species Act, the U.S. Fish and Wildlife Service (FWS) initiated captive-breeding programs and habitat protection. A 1972 DDT ban also helped. The bird now numbers nearly 6,500 pairs in the Lower 48 and may be delisted soon.

Florida Panther
Habitat loss and uncontrolled hunting reduced the Florida panther to only about 35 animals by the 1980s. Cougars once ranged in the thousands across the eastern United States, but the Florida panther is the only cougar subspecies that still survives east of the Mississippi. Protection of some vital habitat has raised the panther population to some 80 animals in recent years and also has helped other listed species, such as wood storks and eastern indigo snakes. But habitat loss persists as a critical threat.

Key Deer
A small subspecies of the white-tailed deer, the Florida Key deer once ranged throughout the keys. Uncontrolled hunting reduced the animal to only 25 individuals by 1950. One of the first species listed under the 1973 law, the deer now numbers about 500 due to habitat protection and restoration. The little animals are still jeopardized by highway construction and road kills.

Mauna Kea Silversword
High up Hawaii’s Mauna Kea volcano grows the silversword, with foot-long leaves that form a rosette 2 feet in diameter. Grazing by introduced sheep and goats reduced the silversword to only 48 plants, all rooted on steep cliffs that represented only 1 percent of the species’ former range. Removal of introduced animals helped raise silversword numbers to about 500.

Piping Plover
If not for the Endangered Species Act, the beleaguered piping plover might be extinct. Human activities along Atlantic and Great Lakes shores and the banks of midwestern rivers and lakes have reduced the species to only 3,000 pairs total. The law provided habitat protections that have helped to stabilize the bird, offering promise for a species in decline since the 1940s.

Florida Manatee
Crushing and drowning in canal locks, tangling in crab-trap lines and colliding with boats were among the factors that cut down the Florida manatee to about 1,000 animals by the 1960s. Measures to reduce these dangers since the species was listed in 1967 have helped bring numbers up to perhaps 3,000. But two Atlantic Coast populations that account for 80 percent of Florida’s manatees still suffer a rate of mortality that makes recovery unlikely without continued protection.

Desert Tortoise
Critical habitat designations under the Endangered Species Act have protected areas vital to the desert tortoise. Although the tortoises can live as long as 100 years, they are not equipped to survive livestock grazing, off-road vehicles, mining and vandalism. FWS, the Bureau of Land Management and the National Park Service all protect land for this species.

Karner Blue Butterfly
The key to survival for the Karner blue butterfly is a flower, the wild blue lupine, that grows in pine barrens in the upper Midwest and Northeast. Development has reduced lupine numbers, robbing the Karner blue of a vital food and driving it to extinction in three states. Habitat restoration and reintroductions promise to recover the butterfly in some regions.

Gray Bat
Some 2.25 million gray bats once lived in limestone caverns in the southern and midwestern states. Human activity near the caves cut bat numbers to about 128,000 by the time the species was listed in 1976. Since then, with more caves and forests protected under the Endangered Species Act, the bat population has rebounded to an estimated 1.5 million animals.

These 30 species, selected by a coalition of 11 conservation groups in celebration of the 30th anniversary of the Endangered Species Act, represent the hundreds of creatures the law has snatched from the threat of extinction.

The Endangered Species Act enjoyed its first incarnation in 1966, but that law was only a weak foreshadow of the current act. Called the Endangered Species Preservation Act, it listed rare and disappearing species but gave them no protection. This law was a lot like publishing a list of murder victims but doing nothing to stop homicide.

The first effort to stem the loss of vanishing creatures came with the enactment of the 1969 Endangered Species Conservation Act, which banned the import of species threatened with worldwide extinction. But real protection did not come until the 1973 law, which is the one we live with today. It prohibits the killing or capturing of listed species or the harming of them in any way, such as through destruction of their habitat. It also forbids federal participation in projects that jeopardize listed species and calls for the protection of habitat critical to listed species.

Under this law, "endangered" designates a species in danger of extinction throughout all or a significant part of its range. "Threatened" refers to species likely to become endangered in the foreseeable future. The U.S. Fish and Wildlife Service manages the listing of land and freshwater species. The National Marine Fisheries Service is in charge of ocean species. One exception: Sea turtles are managed by the fisheries service when in the ocean but by the wildlife service when on land.—Roger Di Silvestro

Add a free square to our virtual quilt to show your support for wildlife in peril.