A Carnival of Colibrí

As besieged Ecuadorian cloud forests come back to life, their spectacular hummingbird inhabitants are returning in droves 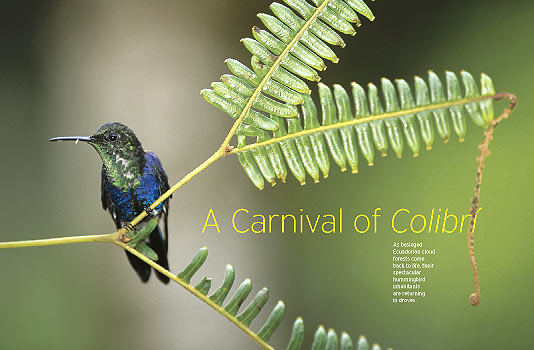 IT’S EIGHT IN THE MORNING at northwestern Ecuador’s Bella-vista Cloud Forest Reserve and, with the sun just cresting a high ridge, the air is literally abuzz—not with insects, but with the wings of tiny birds. Everywhere I look amongst the dangling vines and mosses, hummingbirds (colibrí in Spanish) flit and whir at a frantic pace. Some are minute and resplendent like polished gemstones, others larger, with plumage so shiny they look metal-dipped. A few sport lengthy streamer tails while still others wear what look like fluffy pantaloons around their legs. All are swarming around a string of feeders that hang at various levels in the forest understory. At the center of the action sits an odd-looking, bamboo-and-thatch geodesic dome. Perched on a 7,380-foot, knife-edged ridge on a western slope in the Andes Mountains, the unusual structure is a birding lodge with triangular windows that look out over some of the richest cloud forest habitat in the world.

A dozen years ago, neither the lodge nor the birds were here. That’s when British naturalist Richard Parsons and his Colombian wife Gloria Nicholls arrived and fell in love with the site’s plunging views over the Tandayapa Valley. The couple decided to buy 100 acres (later expanded to 2,000 acres) of what then was unproductive farmland and partly cleared forest clinging precariously to 30 to 60 degree slopes at elevations from 6,000 to 8,000 feet. Their dream was to let nature—scarred but not defeated—return to these Andean slopes, located just two hours by car from Ecuador’s capital, Quito.

They were not alone. Up and down the Tandayapa Valley, like-minded idealists have bought up cheap parcels of land to give back to wildlife. To date, 14 individual owners—some with the backing of local or foreign conservation organizations, others on their own—have created a patchwork of some 6,400 acres of protected land. Like Parsons and Nicholls, many have set up small birding lodges to help defray the costs.

No single entity oversees this profusion of private initiatives, driven simply by a common desire to protect and restore the valley’s wildness. Most of the landowners are members of the Corporation of Private Forests of Ecuador, better known as “The Network.” Through it, they exchange information and band together when problems such as poaching or land invasion arise.

ith an annual rainfall of 100 inches and mean temperatures between 57 and 72 degrees F, nature has done the rest of the work. In just ten years, self-sown seedlings have grown into trees three stories high. And hummingbirds have returned by the droves—19 species at Bellavista alone. These flying jewels represent the vanguard of an increasingly complex regenerating ecosystem that benefits other rare or secretive birds and mammals. Near Bellavista, for example, residents and visitors have spotted shy pumas crossing the road, and occasionally someone catches sight of the even rarer Andean spectacled bear.

Richard Parsons refills his hummingbird feeders one early morning, I watch impatient buff-tailed coronets land on his fingers. From the valley, I hear the sound of mountain toucans and other cloud-forest birds that have recolonized the region. The scene is a simple but powerful lesson on how individuals with a shared vision can indeed make a difference.

New Zealand-based Tui De Roy spent a month in Ecuadorian cloud forests working on her book The Andes: As the Condor Flies, which is scheduled for publication by Firefly this fall.

With its shiny, metallic purple tail feathers, the violet-tailed sylph is a popular sighting at Bellavista Cloud Forest Reserve. A solitary species, the hummingbird is most often found low in forest interiors feeding on small clumps of flowers. It is just one of 19 hummingbird species that inhabit the privately owned reserve. The green-crowned woodnymph (above) favors semi-open habitat, making it ideally suited to regenerating forests. 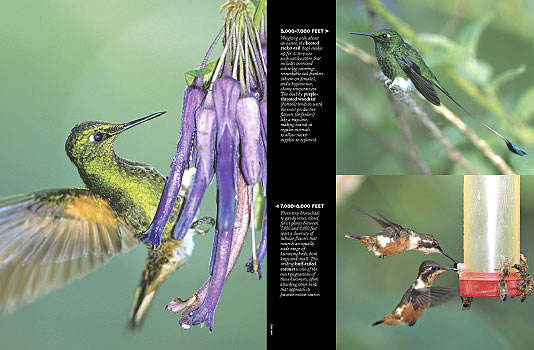 Weighing only about an ounce, the booted racket-tail (above, top right) makes up for its tiny size with catchy attire that includes oversized white leg coverings, remarkable tail feathers (absent on females), and a hyperactive, chatty temperament. The chubby purple-throated woodstar (above, bottom right) tends to work the most productive flowers (or feeders) like a trap-line, making rounds at regular intervals to allow nectar supplies to replenish.

From tiny bromeliads to gaudy vines, cloud forest plants between 7,000 and 8,000 feet sport a diversity of tubular flowers that nourish an equally wide range of hummingbirds, both large and small. The striking buff-tailed coronet (above, left) is one of the most pugnacious of these hummers, often attacking other birds that approach its favorite nectar source. 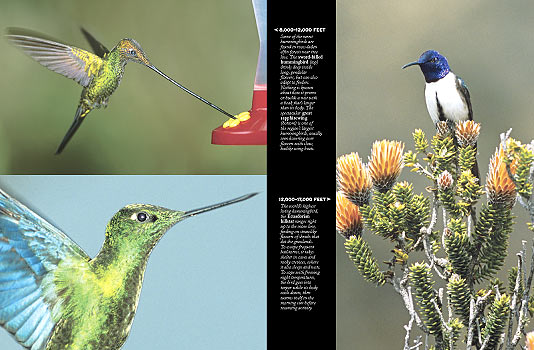 Some of the rarest hummingbirds are found in moss-laden elfin forests near tree line. The sword-billed hummingbird (above, top left) drinks deep inside long, pendular flowers, but can also adapt to feeders. Nothing is known about how it preens or builds a nest with a beak that’s longer than its body. The spectacular great sapphirewing (above, bottom left) is one of the region’s largest hummingbirds, usually seen hovering over flowers with slow, batlike wing beats.

The world’s highest living hummingbird, the Ecuadorian hillstar (above, right) ranges right up to the snow line, feeding on strawlike flowers of shrubs that dot the grasslands. To escape frequent hailstorms, it takes shelter in caves and rocky crevices, where it also sleeps and nests. To cope with freezing night temperatures, the bird goes into torpor while its body cools down, then warms itself in the morning sun before resuming activity.