As the Arctic Melts, An Ancient Culture Faces Ruins 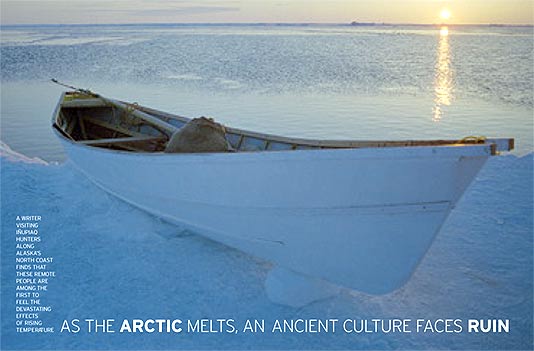 RICHARD GLENN stood as still as a statue, gazing through sunglasses over the piercing white of the sea ice and the deep, flashing darkness of the Arctic Ocean. Three miles from shore north of Barrow, Alaska, he was a sentinel for a group of Iñupiaq subsistence hunters, watching for the spout of a bowhead whale but looking out even more carefully for signs that the ice edge upon which he was standing might break off and float away.

Glenn--geologist, ice scientist, founder of a research group called the Barrow Arctic Science Consortium and leader of an Iñupiaq whaling crew--knew from experience the dangers of an unexpected breakup. In spring 1997, he had been seven miles out on the frozen sea with his crew and more than 150 other whalers when the floes on which they stood began disintegrating. Polar bears moved in for a possible meal, and thick fog rose from the open water, making it impossible for helicopters from Barrow to find the crews. Whalers used the sound of the rotors to talk the choppers into position on handheld radios. The helicopters set down gingerly, half hovering so as not to break or flip the ice fragments. With people riding inside, and snow machines and seal-skin boats dangling underneath, flights continued around the clock until the last hunter was safe ashore.

When I went whaling with Glenn's crew five years later, collecting material for a book on Arctic climate change, the ice had become even thinner and more unpredictable. Glenn and other captains ordered crews to pull back time and again, breaking camp to flee ahead of possible disaster. Then, one morning, he made the call to retreat a little sooner than the others, and his crew was the last to get off the ice before a great crack opened, sending adrift more than 100 whalers and a dead whale. Again the helicopters felt their way through fog and blowing snow. A heroic rescue brought all the people and most of their equipment home safely.

Something unprecedented had now happened twice in five years.

Measures of Change
Climate scientists since the mid-1970s have predicted that warming would come first and strongest in the Arctic. For the past 15 years, the change has been increasingly evident, both to scientists and to indigenous people. In Alaska and western Canada, winter temperatures have risen as much as 7 degrees F over the past 50 years. Since the mid-1970s, the floating Arctic ice pack has lost an area the size of Texas and Arizona combined. With a shorter season of sea ice, fall storms batter Alaska's Arctic coast as never before, causing erosion that threatens communities. "We have talked about how change could have detrimental effects on our culture," Glenn says. "Longer distances and riskier journeys to get food. We're coastal people, and the coast is in danger." 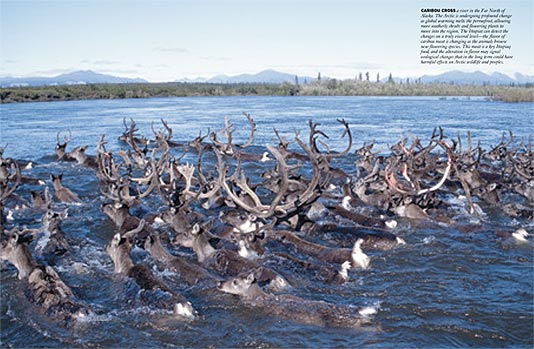 Hunters remember how the ice used to be only a decade or two ago. In October, big, multiyear icebergs would run aground off the gravel shore. Flat new ice would form one cold night to connect the icebergs, which would anchor and strengthen the entire ice sheet the way a steel frame holds the skin of a skyscraper. By the time the sun returned from a two-month absence in late January, the ice would have become an extension of the land, a reliable place for pursuing a family's sustenance until the ice broke up sometime in June or July.

Now the multiyear icebergs do not appear in fall, so the shore ice is far less stable. It freezes later and breaks up earlier. The Iñupiat cannot count on it for the spring hunt as they once could. "If we start losing the spring season, we have to totally rethink ice safety," Glenn says. "Things that were true for fathers won't be true for sons."

As the Arctic environment changes, the centuries-old Iñupiaq culture will be forced to change as well, perhaps becoming in some ways as unrecognizable as the new landscape. The elders, who hold the greatest store of old knowledge, were the first to report the unprecedented ecological changes. Thomas Itta, Sr., in his seventies, perceives these changes whenever he goes hunting on the flat tundra around his village of Atqasuk. He sees the accelerated growth of bushy willows and how the shrubs have redistributed the snowpack. He hears the cries of invading sea gulls that have taken the place of some disappearing waterfowl. He feels the mosquitoes on his skin a month earlier in summer. He tastes a change in caribou meat due to an explosion of tundra flowers, on which the animals graze. The very geography of Itta's world is changing: As the permafrost softens near the surface, ponds are connecting with other water bodies through formerly solid shores. "These lakes and ponds, they never used to break into the others or break into the river," he says. "Starting in the nineties, they started breaking." 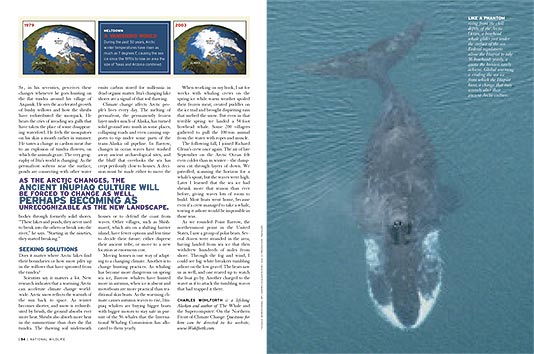 Seeking Solutions
Does it matter where Arctic lakes find their boundaries or how snow piles up in the willows that have sprouted from the tundra?

Scientists say it matters a lot. New research indicates that a warming Arctic can accelerate climate change worldwide. Arctic snow reflects the warmth of the sun back to space. As winter becomes shorter, and snow is redistributed by brush, the ground absorbs ever more heat. Shrubs also absorb more heat in the summertime than does the flat tundra. The thawing soil underneath emits carbon stored for millennia in dead organic matter. Itta's changing lake shores are a signal of that soil thawing.

Climate change affects Arctic people's lives every day. The melting of permafrost, the permanently frozen layer under much of Alaska, has turned solid ground into mush in some places, collapsing roads and even causing supports to tip under some parts of the trans-Alaska oil pipeline. In Barrow, changes in ocean waves have washed away ancient archaeological sites, and the bluff that overlooks the sea has crept perilously close to houses. A decision must be made either to move the houses or to defend the coast from waves. Other villages, such as Shishmaref, which sits on a shifting barrier island, have fewer options and less time to decide their future: either disperse their ancient tribe, or move to a new location at enormous cost.

Moving houses is one way of adapting to a changing climate. Another is to change hunting practices. As whaling has become more dangerous on spring sea ice, Barrow whalers have hunted more in autumn, when ice is absent and motorboats are more practical than traditional skin boats. As the warming climate causes autumn waves to rise, Iñupiaq whalers are buying bigger boats with bigger motors to stay safe in pursuit of the 56 whales that the International Whaling Commission has allocated to them yearly.

When working on my book, I sat for weeks with whaling crews on the spring ice while warm weather spoiled their frozen meat, created puddles on the ice trail and brought dispiriting rain that melted the snow. But even in that terrible spring we landed a 54-foot bowhead whale. Some 200 villagers gathered to pull the 100-ton animal from the water with ropes and muscle.

The following fall, I joined Richard Glenn's crew once again. The air of late September on the Arctic Ocean felt even colder than in winter--the dampness cut through layers of down. We patrolled, scanning the horizon for a whale's spout, but the waves were high. Later I learned that the sea ice had shrunk more that season than ever before, giving waves lots of room to build. Most boats went home, because even if a crew managed to take a whale, towing it ashore would be impossible in those seas.

As we rounded Point Barrow, the northernmost point in the United States, I saw a group of polar bears. Several dozen were stranded in the area, having landed from sea ice that then withdrew hundreds of miles from shore. Through the fog and wind, I could see big white breakers tumbling ashore on the low gravel. The bears saw us as well, and one reared up to watch the boat go by. Another charged to the water as if to attack the tumbling waves that had trapped it there.

Charles Wohlforth is a lifelong Alaskan and author of The Whale and the Supercomputer: On the Northern Front of Climate Change. Questions for him can be directed to his website, www.Wohlforth.net.