As habitats heat up, scientists fear that hundreds of thousands of species could be doomed by 2050; one of them is already gone 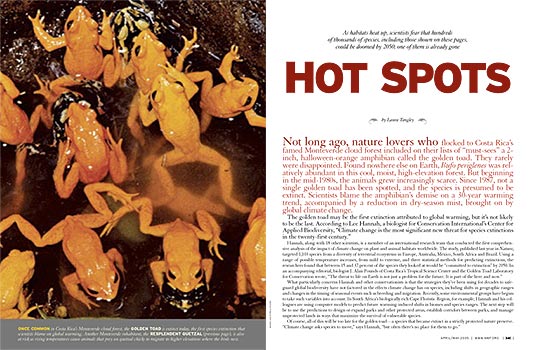 NOT LONG AGO, nature lovers who flocked to Costa Rica’s famed Monteverde cloud forest included on their lists of “must-sees” a 2-inch, halloween-orange amphibian called the golden toad (above). They rarely were disappointed. Found nowhere else on Earth, Bufo periglenes was relatively abundant in this cool, moist, high-elevation forest. But beginning in the mid-1980s, the animals grew increasingly scarce. Since 1987, not a single golden toad has been spotted, and the species is presumed to be extinct. Scientists blame the amphibian’s demise on a 30-year warming trend, accompanied by a reduction in dry-season mist, brought on by global climate change. 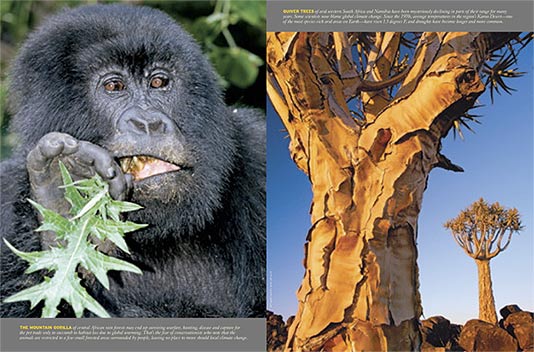 The golden toad may be the first extinction attributed to global warming, but it’s not likely to be the last. According to Lee Hannah, a biologist for Conservation International’s Center for Applied Biodiversity, “Climate change is the most significant new threat for species extinctions in the twenty-first century.”

Hannah, along with 18 other scientists, is a member of an international research team that conducted the first comprehensive analysis of the impact of climate change on plant and animal habitats worldwide. The study, published last year in Nature, targeted 1,103 species from a diversity of terrestrial ecosystems in Europe, Australia, Mexico, South Africa and Brazil. Using a range of possible temperature increases, from mild to extreme, and three statistical methods for predicting extinctions, the researchers found that between 15 and 37 percent of the species they looked at would be “committed to extinction” by 2050. In an accompanying editorial, biologist J. Alan Pounds of Costa Rica’s Tropical Science Center and the Golden Toad Laboratory for Conservation wrote, “The threat to life on Earth is not just a problem for the future. It is part of the here and now.” 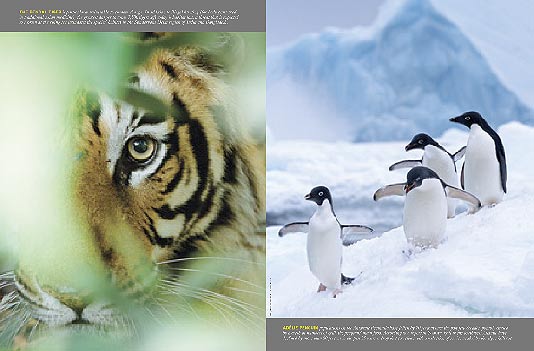 What particularly concerns Hannah and other conservationists is that the strategies they’ve been using for decades to safeguard global biodiversity have not factored in the effects climate change has on species, including shifts in geographic ranges and changes in the timing of seasonal events such as breeding and migration. Recently, some environmental groups have begun to take such variables into account. In South Africa’s biologically rich Cape Floristic Region, for example, Hannah and his colleagues are using computer models to predict future warming-induced shifts in biomes and species ranges. The next step will be to use the predictions to design or expand parks and other protected areas, establish corridors between parks, and manage unprotected lands in ways that maximize the survival of vulnerable species.

Of course, all of this will be too late for the golden toad—a species that became extinct in a strictly protected nature preserve. “Climate change asks species to move,” says Hannah, “but often there’s no place for them to go.”

Laura Tangley is a senior editor of this magazine.