Without the vibrant color of a cardinal or the sweet song of a sparrow, how does a seabird go about attracting its mate? 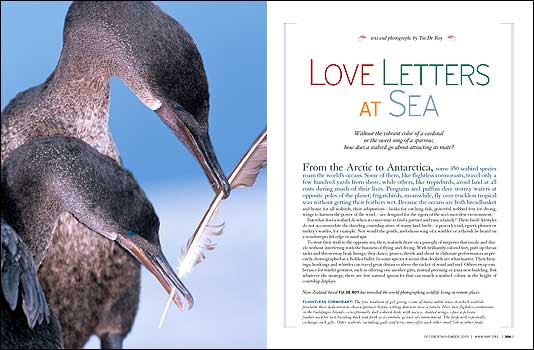 FROM THE ARCTIC to Antarctica, some 350 seabird species roam the world’s oceans. Some of them, like flightless cormorants, travel only a few hundred yards from shore, while others, like tropicbirds, avoid land at all costs during much of their lives. Penguins and puffins dive stormy waters at opposite poles of the planet; frigatebirds, meanwhile, fly over trackless tropical seas without getting their feathers wet. Because the oceans are both breadbasket and home for all seabirds, their adaptations—beaks for catching fish, powerful webbed feet for diving, wings to harness the power of the wind—are designed for the rigors of the sea’s merciless environment.

But what does a seabird do when it comes time to find a partner and raise a family? These birds’ lifestyles do not accommodate the dazzling courtship attire of many land birds—a peacock’s tail, egret’s plumes or turkey’s wattles, for example. Nor would the gentle, melodious song of a warbler or a thrush be heard on a windswept cliff edge or sand spit.

To strut their stuff to the opposite sex, then, seabirds draw on a panoply of surprises that razzle and dazzle without interfering with the business of flying and diving. With brilliantly colored feet, puff-up throat sacks and throwaway beak linings, they dance, prance, shriek and shout in elaborate performances as precisely choreographed as a Bolshoi ballet. In some species it seems that decibels are what matter: Their brayings, honkings and whistles can travel great distances above the racket of wind and surf. Others swap exuberance for tender gestures, such as offering one another gifts, mutual preening or joint nest-building. But whatever the strategy, there are few natural spectacles that can match a seabird colony at the height of courtship displays. 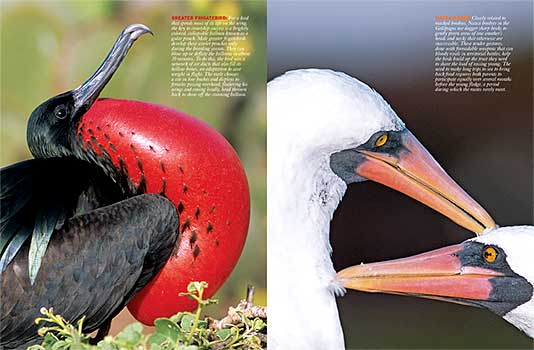 GREATER FRIGATEBIRD : For a bird that spends most of its life on the wing, the key to courtship success is a brightly colored, collapsible balloon known as a gular pouch. Male greater frigatebirds develop these scarlet pouches only during the breeding season. They can blow up or deflate the balloons in about 20 minutes. To do this, the bird uses a network of air ducts that also fill its hollow bones, an adaptation to save weight in flight. The male chooses a site in low bushes and displays to females passing overhead, fluttering his wings and cooing loudly, head thrown back to show off the stunning balloon.

NAZCA BOOBY : Closely related to masked boobies, Nazca boobies in the Galápagos use dagger-sharp beaks to gently preen areas of one another’s heads and necks that otherwise are inaccessible. These tender gestures, done with formidable weapons that can bloody rivals in territorial battles, help the birds build up the trust they need to share the load of raising young. The need to make long trips to sea to bring back food requires both parents to participate equally over several months before the young fledge, a period during which the mates rarely meet. 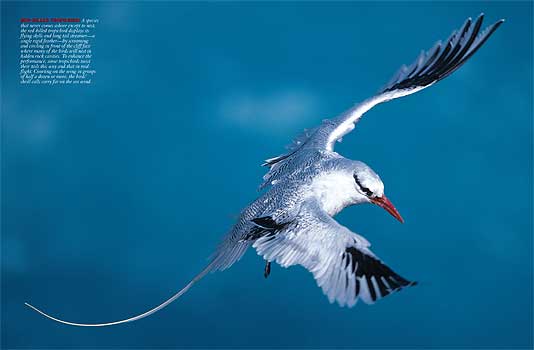 RED-BILLED TROPICBIRD: A species that never comes ashore except to nest, the red-billed tropicbird displays its flying skills and long tail streamer—a single rigid feather—by screaming and circling in front of the cliff face where many of the birds will nest in hidden rock cavities. To enhance the performance, some tropicbirds twist their tails this way and that in mid-flight. Courting on the wing in groups of half a dozen or more, the birds’ shrill calls carry far on the sea wind. 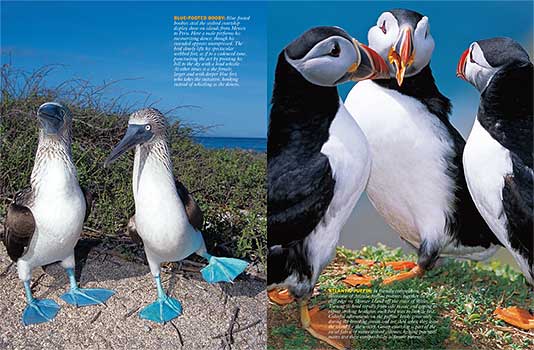 BLUE-FOOTED BOOBY : Blue-footed boobies steal the seabird courtship display show on islands from Mexico to Peru. Here a male performs his mesmerizing dance, though his intended appears unimpressed. The bird slowly lifts his spectacular webbed feet, as if to a cadenced tune, punctuating the act by pointing his bill to the sky with a loud whistle. At other times it is the female, larger and with deeper blue feet, who takes the initiative, honking instead of whistling as she dances.