Struggling to Save the Seahorse 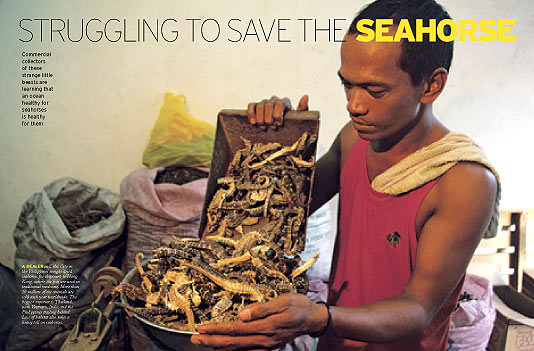 When Amanda Vincent, a biologist with the University of British Columbia, first began working on seahorse conservation in the Philippines in the mid-1990s, her initial task involved teaching local fishermen a new twist on the facts of life. Among seahorses, males carry the eggs in special brood pouches on their bellies and give birth to live young. When she introduced this concept to the fishermen, whose unbridled catching of seahorses could destroy healthy populations, they scoffed at the idea that the fish with bellyfuls of babies were guys. "They were pretty shocked when we showed them that the seahorses with brood pouches also had gonads," says Vincent, the world’s foremost authority on seahorses.

Vincent hoped to convince these seahorse collectors to let pregnant males give birth in holding pens before being sold. She put a pregnant male in an aquarium and invited local fishing families to watch. As father labored, his pouch pumped like a miniature bellows, spurting out batches of perfectly formed baby seahorses. The fishermen were duly impressed, but the display was most popular with the women. The fishermen’s wives, says Vincent, "found it delightful."

The world’s tropical and temperate seas are home to 34 species of seahorse ranging in size from peanut-sized pygmy seahorses to the Pacific and big-bellied seahorses, each more than a foot in length. Small species live about a year, larger species perhaps three to five. All are peculiar-looking fish, swimming along in upright position, with horselike heads, monkeylike, grasping tails and coverings of bony plates. They usually are found in shallow sea grass, along coral reefs or in mangrove stands, where they can change color to match their backgrounds and masquerade as pieces of branching coral or fronds of sea grass. Not being fleet of fin, seahorses lie in wait and slurp up small crustaceans or fish fry through their toothless muzzles. They have few predators. Even if their camouflage fails, the crocodilian skin discourages most would-be diners.

Seahorses are most famous, however, for living the fantasy of every woman in her last trimester: male pregnancy. Males are not just prenatal babysitters, either. They undergo true pregnancy, supplying their broods with oxygen and nutrients until they are released after several weeks of incubation. This unique reproductive system, however protective of the young, comes with a cost. The offsprings’ prolonged dependence on the father makes seahorses vulnerable to overfishing—especially overfishing of pregnant dads.

Vincent has been working on seahorse conservation projects since 1996, when she cofounded Project Seahorse to combat alarming declines in the animal’s numbers. Populations in the central Philippines fell 70 percent between 1985 and 1995, for example, and seahorses in Palk Bay, India, fell 75 percent between 1992 and 1995. Habitat loss and overfishing are the main culprits. Seahorse environments are threatened by dynamite fishing and coastal development. Hand-catching yields a significant impact in some waters, such as those of the Philippines, but most seahorses are taken as bycatch in shrimp-trawler nets—the "extra" sea life brought up by nonselective fishing gear. 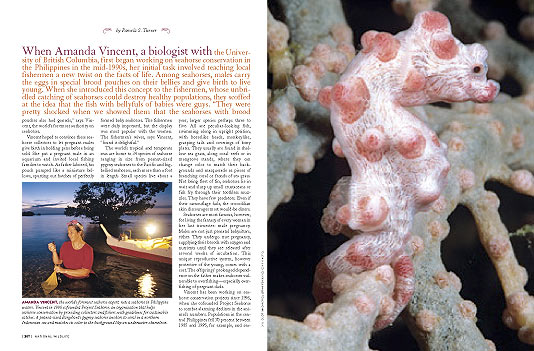 International trade in seahorses last year involved 77 nations and more than 20 million animals. Most seahorses are used in traditional Chinese medicine, often for respiratory ailments or as an aphrodisiac, but some are turned into curios or sold to aquarium hobbyists.

The effects of the heavy take of seahorses is compounded by the fish’s inability to reproduce as quickly as other fish. Besides the extended care fathers give their offspring, seahorses produce relatively small brood sizes. Even a large seahorse produces broods of only 2,000 eggs, compared to the 200,000 or more eggs that a typical, similar-sized fish might release at a time. Most seashore species produce only 100 to 300 eggs per brood, and small species may produce as few as five. In addition, seahorses generally are monogamous. If a mate dies, a seahorse cannot breed again until it finds an unattached member of the opposite sex.

Despite the problems they face, seahorses have one thing going for them: People love them. "Seahorses are fascinating beasts," says Vincent. "They are economically, ecologically and culturally important." Vincent believes this charisma can benefit not just seahorses but many other species. In effect, seahorses are perfect "poster ponies" for marine conservation.

Project Seahorse’s biggest conservation victory to date is the group’s successful campaign to list all seahorse species under Appendix II of the Convention on International Trade in Endangered Species (CITES). Appendix II species are considered threatened, and signatory nations must ensure that their exports of these species are sustainable.

The CITES seahorse listing, which took effect in May 2004, set an important precedent. Previously, commercially valuable fish were considered food items best controlled by the U.N. Food and Agriculture Organization, which has less enforcement muscle than does CITES. Since breaking the CITES barrier, seahorses have been joined on Appendix II by other food species, including humphead wrasses, which are reef fish threatened by the luxury food trade, and by basking, whale and white sharks, at risk from shark-fin-soup fanciers as well as the curio trade.

Project Seahorse helped develop a 4-inch minimum size limit for trade under CITES. "Most species of seahorse will be well served," says Vincent. "The minimum size will allow them to reproduce but allows some fishing. We are keen to find simple tools. You don’t have a choice between perfect and imperfect. You have a choice between imperfect and none." The size limit provides at least some protection for all but the six seahorse species that mature at more than 4 inches in length. CITES adopted the Project Seahorse limit, which is voluntary for participating nations, but countries that do not adhere to it are required to provide another means for ensuring that their seahorse exports do not harm the animals’ populations. 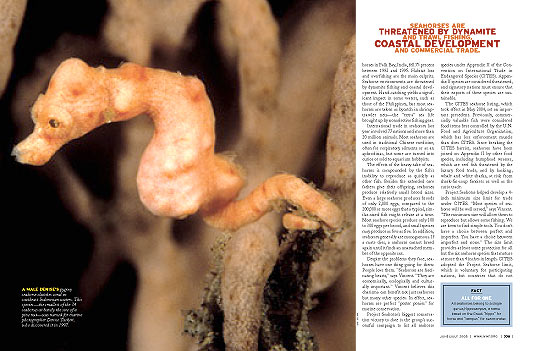 Although Indonesia, Japan, Norway and South Korea withdrew from the CITES seahorse agreement before it took effect, China, the world’s largest seahorse importer, did not. This promising development may owe something to Project Seahorse’s work with the Hong Kong Chinese Medicine Merchants Association. "Traditional Chinese medicine is a perfectly legitimate use for seahorses," Vincent explains. "We are helping them make their trade sustainable." After discussions with Project Seahorse, the association called on its members to avoid undersize animals and pregnant males and to seek alternatives to seahorse medicines whenever possible.

Most importantly, Vincent hopes the CITES seahorse regulations will force countries to address trawl bycatch, particularly that of shrimp fishers. "Trawl fisheries are a profound problem for the oceans," Vincent says. "The ratio of bycatch to shrimp is terrible—often trawlers catch 20 pounds of other creatures for every pound of shrimp." If a significant percentage of seahorse habitat is made off-limits to trawling, countries will be able to declare their seahorse trade sustainable, to the benefit of many creatures wet and salty.

Seahorses may ride to the rescue of other marine wildlife, but it is still their odd looks and family values that people find endearing. Vincent tells of a pair of White’s seahorses she studied in Australia. The pregnant male was attacked during the night by another animal—probably a mollusk—that drilled a hole in his pouch and sucked out his brood. The seahorse was so badly injured Vincent did not expect him to survive. Yet his mate refused to abandon him, even though several unattached males tried to lure her away. Every morning she greeted her mate with the "dance" ritual that helps seahorse couples keep their reproductive cycles in sync. After several months, the male recovered and was able to father another brood. Says Vincent admiringly, "For any animal, that level of fidelity is extraordinary."