The Proof Is in the Science 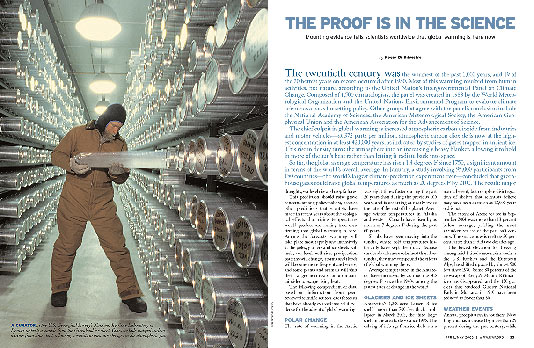 THE TWENTIETH CENTURY was the warmest of the past 1,000 years, and 19 of the 20 hottest years on record occurred after 1980. Most of this warming resulted from human activities, not nature, according to the United Nations' Intergovernmental Panel on Climate Change. Composed of 1,500 climatologists, the panel was created in 1988 by the World Meteorological Organization and the United Nations Environmental Program to evaluate climate science as a basis for setting policy. Other groups that agree with the panel’s conclusion include the National Academy of Sciences, the American Meteorological Society, the American Geophysical Union and the American Association for the Advancement of Science.

The chief culprit in global warming is increased atmospheric carbon dioxide from industries and motor vehicles—at 372 parts per million, atmospheric carbon dioxide is now at the highest concentration in at least 420,000 years, as indicated by studies of gases trapped in ancient ice. This rise in density turns the atmosphere into an increasingly heavy blanket, allowing it to hold in more of the sun’s heat rather than letting it radiate back into space.

So far, the global average temperature has risen 1.4 degrees F since 1750, a significant amount in terms of the world’s overall average. In January, a study involving 95,000 participants from 150 countries—the world’s largest climate-prediction experiment ever—concluded that greenhouse gases could raise global temperatures as much as 20 degrees F by 2100. The result: major droughts, sea-level rise and crop failures.

This prediction should raise grave concerns among policymakers, because other predictions that scientists have made in recent years about the ecological effects that rising temperatures would produce are coming true, confirming that global warming is here. Among the forecasts: warming will take place most rapidly and intensively at the poles, glaciers and ice sheets will melt, sea level will rise, precipitation patterns will change, storms and floods will become more frequent and severe, and some plants and animals will shift their ranges northward or up mountainsides to escape rising heat.

The following compendium of data, based on information from peer-reviewed scientific sources, cites forecasts that have already evolved into solid evidence for the advent of global warming.

Polar Change
The rate of warming in the Arctic was eight times faster during the past 20 years than during the previous 100 years and is occurring at nearly twice the rate of the rest of the planet. Average winter temperatures in Alaska and western Canada have risen by as much as 7 degrees F during the past 60 years. 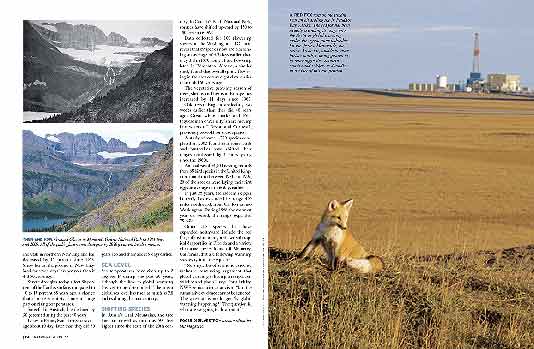 Shrubs have been moving into the tundra, where cold temperatures historically have kept them out. Because shrubs absorb more solar heat than does tundra, they may compound the effects of global warming there.

Average temperatures in the Antarctic have increased by as much as 4.5 degrees F since the 1940s, among the fastest rates of change in the world.

Glaciers and Ice Sheets
Antarctica’s 1,200-acre Larsen B ice shelf—more than 700 feet thick—collapsed in March 2002, the third large shelf in the area to do so since 1995. The calving of icebergs from ice shelves is a normal event, but complete disintegration of shelves that scientists believe may have been as much as 12,000 years old is not.

The extent of Arctic sea ice in September 2004 was more than 13 percent below average, yielding the most shrunken sea ice of the past half century. The sea ice now is melting 20 percent faster than it did two decades ago.

The lowest elevation for freezing among mid-latitude mountains, such as the U.S. Rockies and the European Alps, has shifted upward by almost 500 feet since 1970. Some 80 percent of the snowcap of Kenya’s Mount Kilimanjaro has disappeared, and the 150 glaciers that studded Glacier National Park in Montana in 1910 have been reduced to fewer than 30.

Severe droughts today affect 30 percent of the Earth’s surface, compared to 10 to 15 percent 35 years ago, a change that climate scientists blame in large part on rising temperatures.

Snowfall in Australia has declined by 30 percent during the past 40 years.

Lakes in Pennsylvania freeze on average about 10 days later than they did 50 years ago and thaw about 9 days earlier.

Sea Level
Sea temperatures have risen up to 2 degrees F during the past 20 years, although the link to global warming has yet to be determined. The mean global sea level has risen as much as 7.8 inches during the past century.

Shifting Species
In Russia’s Ural Mountains, the tree line has moved as much as 500 feet higher since the start of the 20th century. In Canada’s Banff National Park, spruces have shifted upward by 150 to 180 feet since 1990.

Data collected for 100 flowering species in the Washington, D.C., area reveal that 89 species now are blossoming an average of 4.5 days earlier than they did in 1970. Only 11 are flowering later. In Edmonton, Alberta, a similar study found that overall spring flowering in the area occurs eight days earlier than it did 60 years ago.

The vegetative growing season of trees, shrubs and herbs in Europe has increased by 11 days since 1960.

Oak trees in England are leafing two weeks earlier than they did 40 years ago. Great white sharks and Portuguese man o’war jellyfish are moving into waters off Devon and Cornwall, previously too cold for these species.

A study of some 1,700 species completed in 2002 found that some birds and butterflies have shifted their ranges northward by 4 miles yearly since the 1960s.

An analysis of 74,000 nesting records from 65 bird species in the United Kingdom found that between 1971 and 1995, 20 of the species were laying their first eggs an average of nine days earlier.

In just 35 years, the sachem skipper butterfly has expanded its range 420 miles northward, from California into Washington. During 1998, the warmest year on record, the range expanded 75 miles.

Other U.S. species that have expanded northward include the red fox, rufous hummingbird, two subtropical dragonflies in Florida and a variety of marine species found off Monterey, California, that are following warming seas away from the equator.

“No single bit of scientific evidence makes a convincing argument that global warming is having an impact on wildlife and plants,” says Doug Inkley, NWF senior science advisor, “but the cumulative evidence cannot be ignored. The question is no longer ‘Is global warming happening?’ The question is, what are we going to do about it?”

Roger Di Silvestro is a senior editor for this magazine.