A Conversation with Andrew Revkin

The \New York Times reporter talks about global warming, the Arctic and his latest book 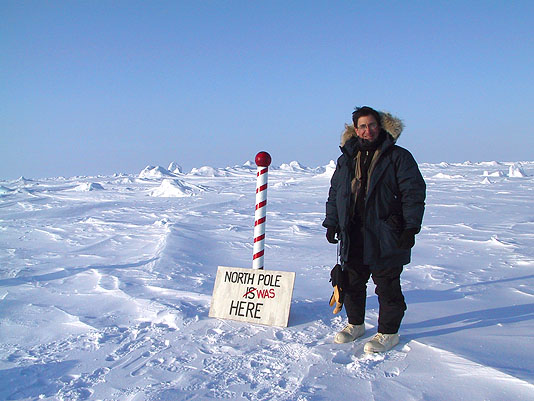 In the following interview, the prize-winning environment reporter for the New York Times talks about global warming, the Arctic and his latest book, The North Pole Was Here: Puzzles and Perils at the Top of the World (Houghton Mifflin Company, 2006), which he wrote for the young-adult market.

Why did you write this book?

I've been writing about climate change for 20 years, but always for adults. Now I feel that the big changes under way in the Arctic, and in the global climate, are too important to leave only to grownups, so I decided to speak to the next generation as well. It's particularly important to do so, I feel, because it is their world that today's adults are affecting. I dedicated the book to my sons, who are 8 and 16. Ideally, the book will be used by everyone in the family to explore this important issue together.

What attracted you to the Arctic?

Actually, I never liked cold very much. In fact, most of my life I've been far more focused on the tropics--on coral reefs, rain forests, warm coasts. I think those areas caught my attention because there are so many kinds of amazing plants and animals there. But as a reporter, my responsibility is to go where the story is, and for years now the pace of climate change has been greatest at the top of the world. A few more degrees at the equator just make a hot place hotter. A few more degrees in the Arctic can mean the difference between the ocean being ice or open water.

Once I got focused on the Far North, I became fascinated by the history of exploration and science there. So many people died trying to conquer and comprehend this ice-cloaked ocean. It became clear to me that the transformation of the Arctic climate is not just a science story, but an epic shift in how we think about the planet.

It was astonishing to realize that later in this century Earth could have one blue pole at some times of the year. Throughout human history both poles have been frozen whiteness.

What surprised you most when you reached the sea ice at the North Pole?

Everything. I knew there would be 24-hour sunlight. I knew the sea ice was floating on a 2-mile-deep ocean. I knew the ice was not some perfect flat cap but actually cracked and in motion. But knowing that and seeing and feeling and hearing it is two very different things.

And there was no life around. In three days and sunlit nights, I only saw one life form other than people. A single seal popped its head up through a black, steaming opening in the ice, looked around, and then vanished again. There were no birds in the sky. We did have shotguns deployed around the camp in case a polar bear showed up. Polar bears are one of the only animals left on Earth that view people only as moving meat. But none came around.

The most surprising thing of all was the sound. Most of the time, there was none, except for the chug of the camp generator. But once in a while, as the slabs of sea ice shifted against each other in the wind and currents, these astonishing noises filled the air: huffing, chugging, hooting noises, kind of like what you hear when Styrofoam squeaks, but bigger and deeper--and scarier. The noises would build and intensify, then the ice would adjust and it would be silent again, except for the wind.

What is the most interesting insight you took away from the Arctic?

It is the one place I've been on the Earth where you constantly are reminded that you are on a planet and not simply at school, or cooking dinner, or driving in a car, or watching TV. We're on this tiny spinning planet in a vast galaxy when we're doing all those things, but life distracts us from that. At the Pole, there are no distractions of any kind. The horizon is the same in every direction. The sun moves in low loops but there is no shape to the day or night. You feel very small. You feel very vulnerable. Modern life sometimes makes us forget that we are small and vulnerable. And every hour or so, you remember that you are standing at the very spot around which the whole thing is rotating. You are at the one place where all is south. And then you realize that human activities very far away--power plant and car exhaust, forest clearing--appear to be transforming this spot.

Was it difficult to do your job there?

Normally, a reporter takes notes with a pen on a pad, uses a tape recorder, or types on a laptop. At the Pole, you have to use a pencil because ink freezes. Your tape recorder batteries die in minutes because of the unbelievable cold. And the low temperatures can wreck a laptop screen as the liquid crystals in the display freeze!

To send my stories and photographs back to the Times, I had to transmit them on a satellite phone with a modem as slow as the slowest dial-up modem was back in the 1990s. It took 45 minutes just to send one picture.

What impressed you most about the scientists working there?

Many people have the impression that science is mainly done in some laboratory or computer room these days. But up at the North Pole, there are many things that cannot be studied with satellites or remote-controlled probes. The men and women who do this work are amazingly resourceful. If your laptop breaks, there's no Geek Squad nearby to fix it. If a winch breaks, there's no mechanic. So every Ph.D. scientist up there was also a wizard at fixing things.

And then there's the bravery factor. There were researchers there who doubled as scuba divers. They dropped through a manhole-size opening melted through eight-foot-thick ice into an ocean 2 miles deep. They had to do this to gather instruments left anchored to the sea floor a year earlier. The folks who make that TV show Fear Factor should bring their contestants to the North Pole sometime.

Why should young people care about global warming?

We all see dramatic changes in temperature and weather every year. Seasons come and go. Heat waves and downpours happen. So it's hard to get excited about predictions that the planet's average temperature is rising a few degrees in a century. But the more scientists learn, the more it is clear that if the amount of heat-trapping pollution flowing from our smokestacks and tailpipes doesn't diminish, the changes may come so fast that they will pose big dangers both to people and nature.

Most of the experts I've talked to over the last 20 years say there's still plenty of uncertainty, but there's also still time to cut the risks somewhat by slowing the rate of warming. They say it's like buying insurance. You don't buy insurance on a house because you know it will burn down, but you invest in it to cut the risk you'll suffer a huge loss if the worst happens.

It's particularly important for today's young people to consider all of this, because decisions being made today around the world are affecting their future.