Blessed with extraordinary natural beauty and a wildlife-loving population, Washington State is home to one of the country’s greatest concentrations of certified Community Wildlife Habitats 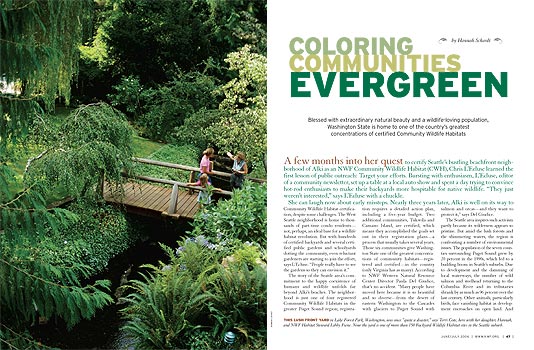 A FEW MONTHS into her quest to certify Seattle's bustling beachfront neighborhood of Alki as an NWF Community Wildlife Habitat (CWH), Chris L'Ecluse learned the first lesson of public outreach: Target your efforts. Bursting with enthusiasm, L'Ecluse, editor of a community newsletter, set up a table at a local auto show and spent a day trying to convince hot-rod enthusiasts to make their backyards more hospitable for native wildlife. "They just weren't interested," says L'Ecluse with a chuckle.

She can laugh now about early missteps. Nearly three years later, Alki is well on its way to Community Wildlife Habitat certification, despite some challenges. The West Seattle neighborhood is home to thousands of part-time condo residents—not, perhaps, an ideal base for a wildlife habitat revolution. But with hundreds of certified backyards and several certified public gardens and schoolyards dotting the community, even reluctant gardeners are starting to join the effort, says L'Ecluse. "People really have to see the gardens so they can envision it."

The story of the Seattle area's commitment to the happy coexistence of humans and wildlife unfolds far beyond Alki's beaches. The neighborhood is just one of four registered Community Wildlife Habitats in the greater Puget Sound region; registration requires a detailed action plan, including a five-year budget. Two additional communities, Tukwila and Camano Island, are certified, which means they accomplished the goals set out in their registration plans—a process that usually takes several years. Those six communities give Washington State one of the greatest concentrations of community habitats—registered and certified—in the country (only Virginia has as many). According to NWF Western Natural Resource Center Director Paula Del Giudice, that's no accident. "Many people have moved here because it is so beautiful and so diverse--from the desert of eastern Washington to the Cascades with glaciers to Puget Sound with salmon and orcas--and they want to protect it," says Del Giudice.

The Seattle area inspires such activism partly because its wilderness appears so pristine. But amid the lush forests and the shimmering waters, the region is confronting a number of environmental issues. The population of the seven counties surrounding Puget Sound grew by 20 percent in the 1990s, which led to a building boom in Seattle's suburbs. Due to development and the damming of local waterways, the number of wild salmon and steelhead returning to the Columbia River and its tributaries shrank by as much as 96 percent over the last century. Other animals, particularly birds, face vanishing habitat as development encroaches on open land. And while the answers to those problems are certainly larger than the efforts of one community (or even six), the Community Wildlife Habitat program lets individual residents join forces to support wildlife one backyard—or one school or park—at a time. The end result: a closely linked patchwork of habitats—an urban greenway—that allows local wildlife to live in areas that would otherwise be inhospitable to them.

"For animals that roam, contiguous yards and common areas that provide habitat help them survive and ultimately reproduce to maintain their numbers," says Roxanne Paul, who coordinates the Federation's habitat programs. For the humans who create those oases, the benefit is a close, everyday connection to animals they would otherwise have to seek out.

The CWH program originated in 1997 when a group from Alpine, California, approached NWF and asked to turn their burgeoning collection of backyard habitats into something greater than the sum of its parts. To be certified as an NWF Backyard Wildlife Habitat™ site, a yard must provide native wildlife with food, water, shelter and places to raise young. For some homeowners, that means putting out a dish of water, avoiding pesticides and planting an edible native shrub. For others, it means ripping out all nonnative plants and turning a backyard into a near-wilderness. 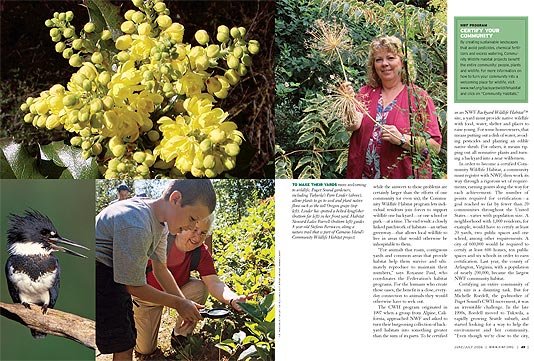 In order to become a certified Community Wildlife Habitat, a community must register with NWF, then work its way through a rigorous set of requirements, earning points along the way for each achievement. The number of points required for certification—a goal reached so far by fewer than 20 communities throughout the United States—varies with population size. A neighborhood with 1,000 residents, for example, would have to certify at least 20 yards, two public spaces and one school, among other requirements. A city of 600,000 would be required to certify at least 600 homes, ten public spaces and six schools in order to earn certification. Last year, the county of Arlington, Virginia, with a population of nearly 200,000, became the largest NWF community habitat.

Certifying an entire community of any size is a daunting task. But for Michelle Roedell, the godmother of Puget Sound's CWH movement, it was an irresistible challenge. In the late 1990s, Roedell moved to Tukwila, a rapidly growing Seattle suburb, and started looking for a way to help the environment and her community. "Even though we're close to the city, there are huge swaths of undeveloped land," she says. One day, while poking around on the Internet, she happened upon the Backyard Wildlife Habitat program and decided to start working toward community-wide certification. At first, fellow Tukwila residents were supportive but doubtful.

"People at the community center said that if you get 10 people at the first meeting, it's a success," says Roedell. "Well, we got 65." Among those early supporters was Pam Linder, a longtime member of the Tukwila City Council. Soon, every member of the council had a certified backyard. In 2002, the city became Washington's first certified Community Wildlife Habitat and only the fourth in the United States. Since then, Roedell and her colleagues have continued to host an annual Backyard Wildlife Fair, drawing thousands of visitors each year for workshops on building birdhouses, attracting bats and getting a yard certified. Other communities quickly followed Tukwila's lead, as did funding sources: For the past two years, the Russell Family Foundation has given $30,000 grants to the Puget Sound CWH programs.

Despite the geographic proximity of Washington's community habitats—all are situated within 75 miles of each other—there is remarkable diversity in both their populations and their natural environments. Alki, for example, has been nearly denuded of trees over the last two centuries of intense urbanization. Camano Island and Lake Forest Park are thickly forested. Yet certain challenges tend to be common to all.

"No matter how much we try to pound it into their heads that it's easy to get certified, people get intimidated," says Alki's L'Ecluse. "They're afraid they'll have to clean up their yards or tear everything out and start over."

That's why L'Ecluse and other CWH boosters say public demonstration gardens in schools, parks and even front yards are vital to a community habitat's success: They show that a wildlife-friendly yard can be as attractive as any other. In her Tukwila yard, Linder maintains a lush mix of standard flowering plants alongside others, like millet, that are allowed to go to seed. On Camano Island, Dodie Markey sacrifices an unfettered view of Puget Sound by keeping and planting native trees and shrubs; she is rewarded with views of bald eagles, kingfishers and chickadees. And then there are the diehards. In Lake Forest Park, a verdant Seattle suburb that has been working toward CWH certification since early 2005, residents Deborah and Jeff Watts simply handed their yard back to nature. Where a clipped lawn once sloped down from the house towards a narrow stream, cattails and native wildflowers now grow unchecked. The couple just removed the grass and let the stream, the birds and time re-create what had once been there for centuries: marshy wetlands.

"It's such a positive program," says Val Schroeder, the founder of the Camano Island Community Wildlife Habitat group, which celebrated the island's certification last summer. Schroeder says she wanted to cry when she saw her island home losing its character to logging and development. But instead of giving up or getting angry, she was spurred to action. She recruited more than two dozen neighbors as NWF Habitat Stewards, highly experienced volunteers who are certified to train others in habitat conservation.

Over the next couple of years, the group certified more than 500 Camano Island yards as backyard habitats--an impressive number in a sparsely inhabited island community with no town council to ease the way. Schroeder says the experience taught her what may be the most important lesson to be learned from creating a Community Wildlife Habitat: "Rather than be upset about development and loss of habitat, we can get out there and actually do something."

Hannah Schardt is a senior associate editor at National Wildlife.

By creating sustainable landscapes that avoid pesticides, chemical fertilizers and excess watering, Community Wildlife Habitat projects benefit the entire community: people, plants and wildlife. Learn how to turn your community into a welcoming place for wildlife.