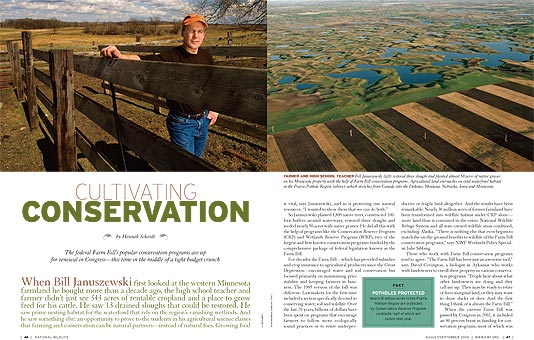 WHEN BILL JANUSZEWSKI first looked at the western Minnesota farmland he bought more than a decade ago, the high school teacher and farmer didn't just see 343 acres of rentable cropland and a place to grow feed for his cattle. He saw 13 drained sloughs that could be restored. He saw prime nesting habitat for the waterfowl that rely on the region's vanishing wetlands. And he saw something else: an opportunity to prove to the students in his agricultural science classes that farming and conservation can be natural partners--instead of natural foes. Growing food is vital, says Januszewski, and so is protecting our natural resources. "I wanted to show them that we can do both."

So Januszewski planted 1,800 native trees, constructed 100-foot buffers around waterways, restored three sloughs and seeded nearly 50 acres with native grasses. He did all this with the help of programs like the Conservation Reserve Program (CRP) and Wetlands Reserve Program (WRP), two of the largest and best known conservation programs funded by the comprehensive package of federal legislation known as the Farm Bill.

For decades the Farm Bill--which has provided subsidies and crop insurance to agricultural producers since the Great Depression--encouraged water and soil conservation but focused primarily on maintaining price stability and keeping farmers in business. The 1985 version of the bill was different: Lawmakers for the first time included a section specifically devoted to conserving water, soil and wildlife. Over the last 20 years, billions of dollars have been spent on programs that encourage farmers to follow more ecologically sound practices or to retire underproductive or fragile land altogether. And the results have been remarkable: Nearly 36 million acres of former farmland have been transformed into wildlife habitat under CRP alone--more land than is contained in the entire National Wildlife Refuge System and all state-owned wildlife areas combined, excluding Alaska. "There is nothing else that even begins to match the on-the-ground benefits to wildlife of the Farm Bill conservation programs," says NWF Wetlands Policy Specialist Julie Sibbing.

Those who work with Farm Bill conservation programs tend to agree. "The Farm Bill has been just an awesome tool," says David Covington, a biologist in Arkansas who works with landowners to enroll their property in various conservation programs. "People hear about what other landowners are doing and they call me up. They may be ready to retire or have marginal land, or they may want to draw ducks or deer. And the first thing I think of is always the Farm Bill."

When the current Farm Bill was passed by Congress in 2002, it included an 80 percent boost in funding for conservation programs, most of which was authorized for so-called working land payment programs. These programs reward producers who keep farmland in production but agree to follow certain environmentally friendly land-management practices, such as creating buffers around waterways. Still, the heart of the Farm Bill remains land-retirement programs such as CRP, which pays landowners to remove highly erodible or otherwise environmentally sensitive land from production for periods of 10 to 15 years. Landowners get paid to voluntarily stop farming largely underproductive land; wildlife gets more high-quality habitat. 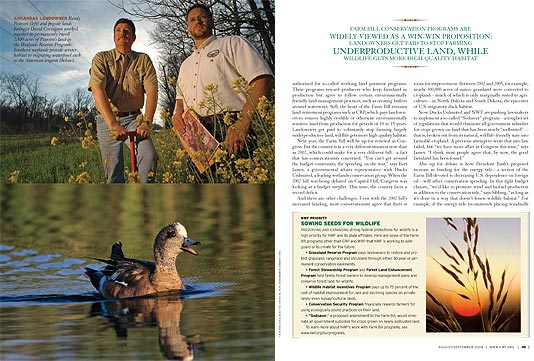 Next year, the Farm Bill will be up for renewal in Congress. But the country is in a very different situation now than in 2002, which could make for a very different bill--a fact that has conservationists concerned. "You can't get around the budget constraints, the spending on the war," says Bart James, a governmental affairs representative with Ducks Unlimited, a leading wetlands conservation group. When the 2002 bill was being debated on Capitol Hill, Congress was looking at a budget surplus. This time, the country faces a record deficit.

And there are other challenges. Even with the 2002 bill's increased funding, most conservationists agree that there is room for improvement. Between 2002 and 2005, for example, nearly 300,000 acres of native grassland were converted to cropland--much of which is only marginally suited to agriculture--in North Dakota and South Dakota, the epicenter of U.S. migratory duck habitat.

Now Ducks Unlimited and NWF are pushing lawmakers to implement a so-called "Sodsaver" program--a tougher set of regulations that would eliminate all government subsidies for crops grown on land that has been newly "sodbusted"--that is, broken out from its natural, wildlife-friendly state into farmable cropland. A previous attempt to write that into law failed, but "we have more allies in Congress this time," says James. "I think most people agree that, by now, the good farmland has been found."

Also up for debate is how President Bush's proposed increase in funding for the energy title--a section of the Farm Bill devoted to decreasing U.S. dependence on foreign oil--will affect conservation spending. In this tight budget climate, "we'd like to promote wind and biofuel production in addition to the conservation title," says Sibbing, "as long as it's done in a way that doesn't lessen wildlife habitat." For example, if the energy title recommends placing windmills on CRP land, she says, that could mean a decrease in high-quality wildlife habitat--even if the land remains unfarmed.

Meanwhile, Farm Bill conservation programs continue to enroll new participants. But David Long, an agriculture liaison with the Arkansas Game and Wildlife Department, says that the message isn't reaching everyone it should. Despite years of spreading the word through workshops and seminars--some sponsored by NWF and its Arkansas affiliate, the Arkansas Wildlife Federation--Long says that many of the landowners who could benefit most from Farm Bill programs are still not enrolled.

"There are so many farmers out there who don't know about the financial incentives," says Long. "Farmers are strapped, fuel costs are up, and profit margins are so low. These programs can help these landowners to diversify, especially if they're farming marginal land."

One diversification success story is that of Arkansas landowner and insurance agent Randy Pearson. Three years ago, Pearson permanently enrolled 2,500 acres of rolling hills he owns near the Mississippi River in the Wetlands Reserve Program--including nearly 1,000 cultivatable acres. "There was no way to level it. And it was land we could not, economically, ever water," says Pearson. Instead of continuing to struggle against the landscape, Pearson decided to embrace it. Once he won approval from the WRP, government hydrologists visited the land and began making improvements, including a carefully planned system of levees. Each year, in late winter, Pearson slowly releases water from the levees, allowing collected native grass seed to spread over the land and take root.

"The wildlife really loves it, especially the ducks," says Pearson. "And we're able to hold a lot more of them now." Though he is thrilled to share his land with waterfowl, Pearson's motivations are not wholly altruistic. "Around here--and I'm sure in other places--recreational land is becoming worth as much as cultivatable land," he says. Pearson now runs a successful hunting business. "The game has really exploded--ducks, but also quail and rabbit," he says. "It's just a great deal." 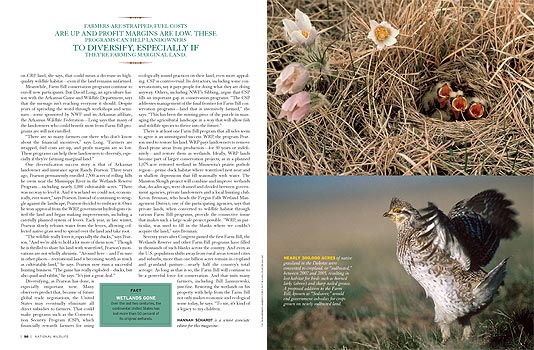 Diversifying, as Pearson has done, is especially important now. Many observers predict that, because of future global trade negotiations, the United States may eventually eliminate all direct subsidies to farmers. That could make programs such as the Conservation Security Program (CSP), which financially rewards farmers for using ecologically sound practices on their land, even more appealing. CSP is controversial: Its detractors, including some conservationists, say it pays people for doing what they are doing anyway.

Others, including NWF's Sibbing, argue that CSP fills an important gap in conservation programs. "The CSP addresses management of the final frontier for Farm Bill conservation programs--land that is intensively farmed," she says. "This has been the missing piece of the puzzle in managing the agricultural landscape in a way that will allow fish and wildlife species to thrive into the future."

There is at least one Farm Bill program that all sides seem to agree is an unmitigated success: WRP, the program Pearson used to restore his land. WRP pays landowners to remove flood-prone areas from production--for 30 years or indefinitely--and restore them as wetlands. Ideally, WRP lands become part of larger conservation projects, as in a planned 1,075-acre restored wetland in Minnesota's prairie pothole region--prime duck habitat where waterfowl nest near and in shallow depressions that fill seasonally with water. The Manston Slough project will combine and improve wetlands that, decades ago, were drained and divided between government agencies, private landowners and a local hunting club. Kevin Brennan, who heads the Fergus Falls Wetland Management District, one of the participating agencies, says that private lands, when converted to wildlife habitat through various Farm Bill programs, provide the connective tissue that makes such a large-scale project possible. "WRP, in particular, was used to fill in the blanks where we couldn't acquire the land," says Brennan.

Seventy years after Congress passed the first Farm Bill, the Wetlands Reserve and other Farm Bill programs have filled in thousands of such blanks across the country. And even as the U.S. population shifts away from rural areas toward cities and suburbs, more than one billion acres remain in cropland and grassland pasture--nearly half the country's total acreage. As long as that is so, the Farm Bill will continue to be a powerful force for conservation. And that suits many farmers, including Bill Januszewski, just fine. Restoring the wetlands on his property with help from the Farm Bill not only makes economic and ecological sense today, he says: "To me, it's kind of a legacy to my children.

Hannah Schardt is a senior associate editor for this magazine.

Preserving and expanding strong federal protections for wildlife is a high priority for NWF and its state affiliates. Here are some of the Farm Bill programs other than CRP and WRP that NWF is working to safeguard or to create for the future:

Grassland Reserve Program pays landowners to restore and protect grassland, rangeland and shrubland through either 30-year or permanent conservation easements.

Wildlife Habitat Incentives Program pays up to 75 percent of the cost of habitat improvement for rare and declining species on private lands--even nonagricultural lands.

"Sodsaver," a proposed amendment to the Farm Bill, would eliminate all government subsidies for crops grown on newly sodbusted land.