Finding Comfort in the Cold

For some North American birds, the ideal place to pass the winter is, well, wintry 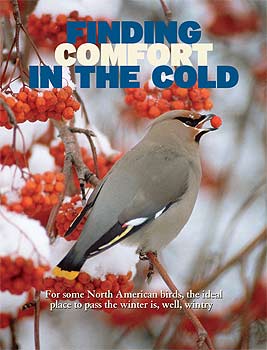 I REMEMBER the first time I saw a rough-legged hawk—almost 20 years ago while on a birding trip in Ithaca. It was a typical January day in Upstate New York: overcast and bitterly cold, with a stiff wind that penetrated our parkas and whipped snow across an open meadow.

A big raptor was coursing up and back over the area, and I could easily identify the black “elbow” spots on its white underwings. As wind bent the dead weeds flat to the ground, I was filled with admiration for the bird’s indifference to rough weather. But I also wondered, why hadn’t I noticed this species hunting the same field the previous summer?

Our trip leader explained that rough-legged hawks aren’t year-round residents of the area—they show up only in winter. Each fall, when most migratory birds are leaving Upstate New York for points south, rough-legs are leaving their Arctic breeding grounds for destinations in northern-tier states in the Lower 48 and southern Canada. The meadow, which looked like frozen tundra to me that day, was to this bird a welcome winter haven.

The rough-leg’s migration pattern—leaving summer breeding grounds in the far north to fly not very far south and winter in a place that’s, well, wintry—is uncommon among North American birds. Of the more than 800 species of breeding birds that range on the continent, about 600 are migratory, and of these about 500 species migrate to the Neotropics in winter. Of the 100 or so species that remain, some have evolved unique adaptations that allow them to survive a winter’s worth of extreme conditions: cold, wind and difficult foraging. 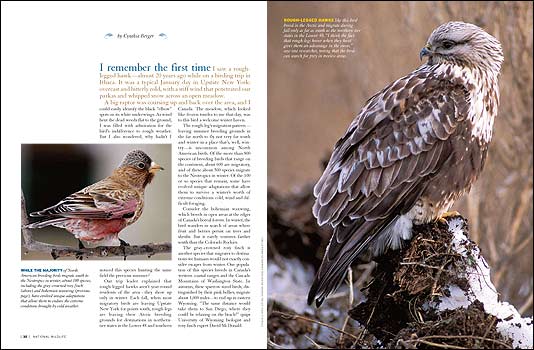 Consider the bohemian waxwing, which breeds in open areas at the edges of Canada’s boreal forests. In winter, the bird wanders in search of areas where fruit and berries persist on trees and shrubs. But it rarely ventures farther south than the Colorado Rockies.

The gray-crowned rosy finch is another species that migrates to destinations we humans would not exactly consider escapes from winter. One population of this species breeds in Canada’s western coastal ranges and the Cascade Mountains of Washington State. In autumn, these sparrow-sized birds, distinguished by their pink bellies, migrate about 1,000 miles—to end up in eastern Wyoming. “The same distance would take them to San Diego, where they could be relaxing on the beach!” quips University of Wyoming biologist and rosy finch expert David McDonald.

These birds spend the winter months on wind-whipped mountain slopes, typically at an elevation where humans are prone to contract altitude sickness. They roost at night in narrow cracks in rocky cliffs, then sally out by day to forage for wind-blown wildflower seeds.

If that sounds like a tough way to get through the winter months, consider the spectacled eider, a three-pound sea duck that, in summer, nests in coastal areas in Siberia and on Alaska’s North Slope. Until fairly recently, this species was an enigma to biologists. In autumn, it would disappear from its breeding grounds, presumably launched on migration in order to spend the winter somewhere. But exactly where remained a mystery.

Then in 1995, U.S. Fish and Wildlife Service biologists discovered the spectacled eiders’ hideout. These tough birds do head south in autumn, it turned out, but their destination is the middle of the Bering Sea where they winter in “leads,” or narrow channels in the sea ice. This means that their legs and bellies are immersed in 29-degree-F seawater 24 hours a day, 7 days a week, while topside temperatures hover in the teens with winds gusting from 35 up to 60 miles per hour. 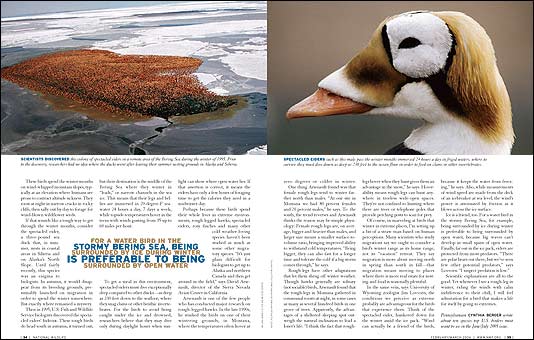 To get a meal in this environment, spectacled eiders must dive exceptionally deep compared to other ducks—as deep as 230 feet down to the seafloor, where they snag clams or other benthic invertebrates. For the birds to avoid being caught under the ice and drowned, researchers believe that they may dive only during daylight hours when sunlight can show where open water lies. If that assertion is correct, it means the eiders have only a few hours of foraging time to get the calories they need in a midwinter day.

Perhaps because these birds spend their whole lives in extreme environments, rough-legged hawks, spectacled eiders, rosy finches and many other cold-weather-loving species haven’t been studied as much as some other migratory species. “It’s just plain difficult for biologists to get up to Alaska and northern Canada and then get around in the field,” says David Arsenault, director of the Sierra Nevada Avian Center in California.

Arsenault is one of the few people who has conducted major research on rough-legged hawks. In the late 1990s, he studied the birds on one of their wintering grounds, in Montana, where the temperatures often hover at zero degrees or colder in winter.

One thing Arsenault found was that female rough-legs tend to winter farther north than males. “At our site in Montana we had 80 percent females and 20 percent males,” he says. To the south, the trend reverses and Arsenault thinks the reason may be simple physiology: Female rough-legs are, on average, bigger and heavier than males, and larger size means a smaller surface-to-volume ratio, bringing improved ability to withstand cold temperatures. “Being bigger, they can also fast for a longer time and tolerate the cold if a big storm comes through,” he says.

Rough-legs have other adaptations that let them shrug off winter weather. Though hawks generally are solitary (not sociable) birds, Arsenault found that the rough-legs in Montana gathered in communal roosts at night, in some cases as many as several hundred birds in one grove of trees. Apparently, the advantages of a sheltered sleeping spot outweigh the natural inclination to lead a loner’s life. “I think the fact that rough-legs hover when they hunt gives them an advantage in the snow,” he says. Hover-ability means rough-legs can hunt anywhere in treeless wide-open spaces. They’re not confined to hunting where there are trees or telephone poles that provide perching posts to scan for prey.

Of course, in marveling at birds that winter in extreme places, I’m setting up a bit of a straw man based on human perceptions. Many scientists who study migrations say we ought to consider a bird’s winter range as its home range, not its “vacation” retreat. They say migration is more about moving north in spring than south in fall—that migration means moving to places where there is more real estate for nesting and food is seasonally plentiful.

In the same vein, says University of Wyoming zoologist Jim Lovvorn, the conditions we perceive as extreme probably are advantageous for the birds that experience them. Think of the spectacled eider, hunkered down for the winter amid the ice pack. “Wind can actually be a friend of the birds, because it keeps the water from freezing,” he says. Also, while measurements of wind speed are made from the deck of an icebreaker at sea level, the wind’s power is attenuated by friction as it blows across the ice surface.

Ice is a friend, too. For a water bird in the stormy Bering Sea, for example, being surrounded by ice during winter is preferable to being surrounded by open water, because big waves can’t develop in small spans of open water. Finally, far out in the ice pack, eiders are protected from most predators. “There are polar bears out there, but we’ve seen few other potential predators,” says Lovvorn. “I suspect predation is low.”

Scientific explanations are all to the good. Yet whenever I see a rough-leg in winter, riding the winds with calm indifference to their chill, I still feel admiration for a bird that makes a life for itself by going to extremes.