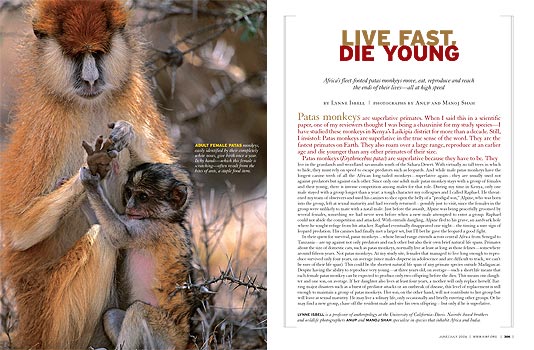 PATAS MONKEYS are superlative primates. When I said this in a scientific paper, one of my reviewers thought I was being a chauvinist for my study species--I have studied these monkeys in Kenya's Laikipia district for more than a decade. Still, I insisted: Patas monkeys are superlative in the true sense of the word. They are the fastest primates on Earth. They also roam over a large range, reproduce at an earlier age and die younger than any other primates of their size. 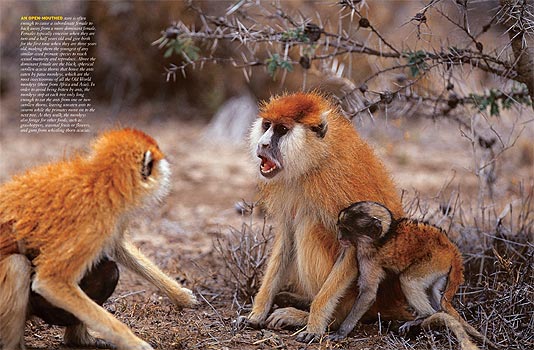 Patas monkeys (Erythrocebus patas) are superlative because they have to be. They live in the grasslands and woodland-savannahs south of the Sahara Desert. With virtually no tall trees in which to hide, they must rely on speed to escape predators such as leopards. And while male patas monkeys have the longest canine teeth of all the African long-tailed monkeys--superlative again--they are usually used not against predators but against each other. 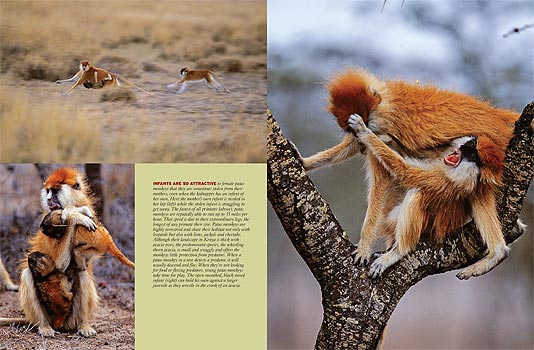 Since only one adult male patas monkey stays with a group of females and their young, there is intense competition among males for that role. During my time in Kenya, only one male stayed with a group longer than a year: a tough character my colleagues and I called Raphael. He threatened my team of observers and used his canines to slice open the belly of a "prodigal son," Alpine, who was born into the group, left at sexual maturity and had recently returned--possibly just to visit, since the females in the group were unlikely to mate with a natal male. Just before the assault, Alpine was being peacefully groomed by several females, something we had never seen before when a new male attempted to enter a group. Raphael could not abide the competition and attacked. With entrails dangling, Alpine fled to his grave, an aardvark hole where he sought refuge from his attacker. Raphael eventually disappeared one night--the timing a sure sign of leopard predation. His canines had finally met a larger set, but I'll bet he gave the leopard a good fight. 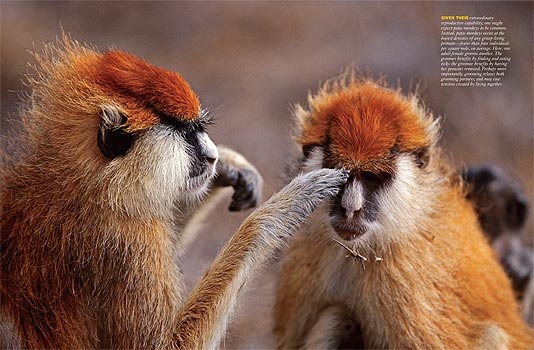 In their quest for survival, patas monkeys--whose broad range extends across central Africa from Senegal to Tanzania--are up against not only predators and each other but also their own brief natural life spans. Primates about the size of domestic cats, such as patas monkeys, normally live at least as long as those felines--somewhere around fifteen years. Not patas monkeys. At my study site, females that managed to live long enough to reproduce survived only four years, on average (since males disperse in adolescence and are difficult to track, we can't be sure of their life span). This could be the shortest natural life span of any primate species outside Madagascar. Despite having the ability to reproduce very young--at three years old, on average--such a short life means that each female patas monkey can be expected to produce only two offspring before she dies. This means one daughter and one son, on average. If her daughter also lives at least four years, a mother will only replace herself. Barring major disasters such as a burst of predator attacks or an outbreak of disease, this level of replacement is still enough to maintain a group of patas monkeys. Her son, on the other hand, will not contribute to her group but will leave at sexual maturity. He may live a solitary life, only occasionally and briefly entering other groups. Or he may find a new group, chase off the resident male and sire his own offspring--but only if he is superlative.

Lynne Isbell is a professor of anthropology at the University of California-Davis.