Put a Cork in It

The increasing popularity of synthetic wine stoppers and screw caps is threatening wildlife-rich cork forests on the Iberian Peninsula, where for centuries people and nature have lived in harmony 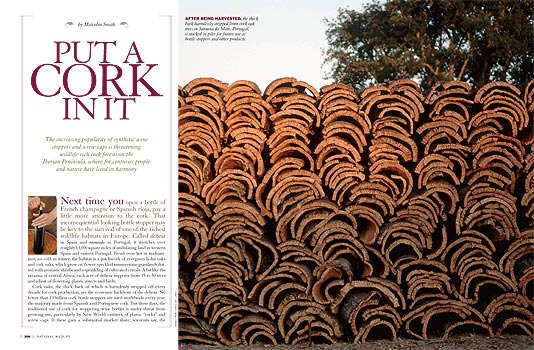 NEXT TIME you open a bottle of French champagne or Spanish rioja, pay a little more attention to the cork. That inconsequential-looking bottle stopper may be key to the survival of one of the richest wildlife habitats in Europe. Called dehesa in Spain and montado in Portugal, it stretches over roughly 13,000 square miles of undulating land in western Spain and eastern Portugal. Bread-oven hot in midsummer, ice cold in winter, the habitat is a patchwork of evergreen holm oaks and cork oaks, which grow on flower-speckled summertime grasslands dotted with aromatic shrubs and a sprinkling of cultivated cereals. A bit like the savanna of central Africa, each acre of dehesa supports from 15 to 50 trees and a host of flowering plants, insects and birds.

Cork oaks, the thick bark of which is harmlessly stripped off every decade for cork production, are the economic backbone of the dehesa. No fewer than 13 billion cork bottle stoppers are used worldwide every year, the majority made from Spanish and Portuguese cork. But these days, the traditional use of cork for stoppering wine bottles is under threat from growing use, particularly by New World vintners, of plastic "corks" and screw caps. If these gain a substantial market share, scientists say, the dehesa-montado habitat could be doomed.

"Dehesa is vital to the continued existence of birds such as the Spanish imperial eagle, its world population only about 170 pairs; the black vulture, Europe's largest bird of prey; and the rare black stork," says dehesa expert Mario Díaz, associate professor of zoology at Castilla La Mancha University in Spain. Wildcats, Iberian lynx and common genets--small, long-tailed, catlike mammals sacred to the ancient Egyptians--patrol the dehesa at night, hunting for smaller mammals and birds. A few packs of wolves and the occasional giant-sized eagle owl do the same.

Cultivated Wilderness
Walk in the dehesa early on a spring morning and the sun, a golden globe on the horizon, suffuses the landscape with warmth and light. Mist rises between the olive-colored oaks as the dew of the cool night slowly evaporates. The trees cast long shadows like rows of giant soldiers. The serin, a finch with a canary yellow chest, starts its jingling song--like tiny splinters of falling glass--from the topmost branch of an oak. Soon, greenfinches join in with their mellow cadenzas, competing with the roller-coaster pitches of woodlark songs. A flash of blue and cinnamon, coupled with some harsh shrieks, gives away a posse of azure-winged magpies as they zoom in follow-the-leader flight from the low branches of one tree to the next. In the distance, an exotically colored hoopoe, all pink, black and white, shouts the "hoop, hoop" call from which its name is derived.

Surprisingly, this wildlife mecca is a product of human activities. In the 16th century, an army of peasants cut down the primeval forests of Extremadura, now the westernmost region of Spain. But they were selective loggers, leaving some trees to provide summer shade for sheep. No one is sure whether the dehesa was created entirely by such selective tree removal. In places, forests may have been set on fire--an easy task in blistering summer heat when every scrap of vegetation is dry tinder--and the burned ground planted with holm and cork oaks. 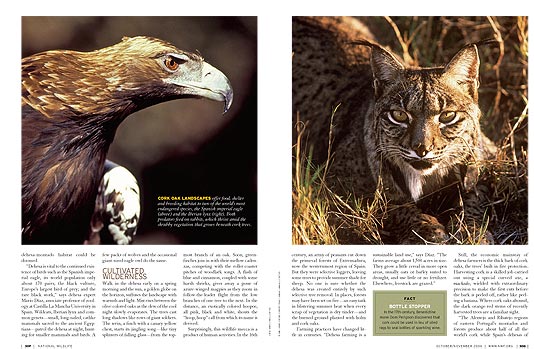 Farming practices have changed little in centuries. "Dehesa farming is a sustainable land use," says Díaz. "The farms average about 1,500 acres in size. They grow a little cereal in more open areas, usually oats or barley suited to drought, and use little or no fertilizer. Elsewhere, livestock are grazed." Still, the economic mainstay of dehesa farmers is the thick bark of cork oaks, the trees' built-in fire protection. Harvesting cork is a skilled job carried out using a special curved axe, a machado, wielded with extraordinary precision to make the first cuts before the bark is peeled off, rather like peeling a banana. Where cork oaks abound, the dark orange-red stems of recently harvested trees are a familiar sight.

"The Alentejo and Ribatejo regions of eastern Portugal's montados and forests produce about half of all the world's cork while Spain's dehesas of Extremadura and Andalusia produce another quarter," says Eduardo Goncalves of One Planet Living Portugal, who has produced a detailed report on the economics of cork for the United Kingdom's Royal Society for the Protection of Birds. Although much of the lower quality cork is used to make products such as wall tiles, vehicle engine gaskets and sports equipment, cork's economic value comes from the best quality bark, used to make wine-bottle stoppers.

Improper Stopper
Recently, plastic corks--many made to resemble the real thing--are stoppering more and more wine bottles, especially at the cheaper end of the market. The reason for the switch is "cork taint," the musty smell some wines have when you open the bottle. The source of the odor is a chemical called TCA, or trichloroanisole, produced by the interaction of molds and bacteria in the cork pores with traces of bleach used to sanitize the cork. Wine experts and industry insiders quote a wide array of figures about how commonplace cork taint actually is--from less than one bottle in 100 to as many as one in 12. Much of the variation might be explained by how severe the taint actually is, anything from a foul, wet-carpet odor at its worst to a wine in which the taste is flat or dull. 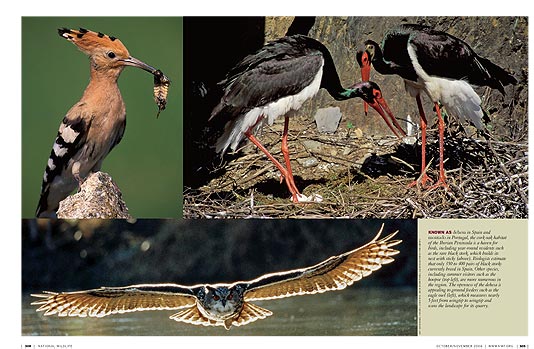 Hit by a decline in their bottle-cork market, producers in Spain and Portugal are fighting back. A few years ago, APCOR, the Portuguese Cork Association, announced a $1 million research fund to tackle cork taint. "This initiative demonstrates clearly that we are dedicating the appropriate resources to finding a solution to TCA in natural cork stoppers industry wide," said Francisco de Brito Evangelista, director of APCOR's International Campaign for Cork.

According to Goncalves, in the decade or so since plastic corks first appeared, they have usurped up to 7 percent of the bottle-stopper market. If this rise continues to 15 percent, he predicts, "A surplus of cork could trigger significant price drops, causing dehesa farmers to go out of business or to consider alternative crops, such as eucalyptus trees that grow well in the climate of the western Iberian Peninsula." But for wildlife, and because it sucks up so much water and nutrients from soil, eucalyptus is a disaster. Abandoning dehesas also would allow scrub (often gum cistus, a fire hazard) to take over. Felling the trees and growing crops would be equally destructive.

A major slump in the quality cork market would also jeopardize the jobs of some 40,000 cork harvesters and processors in Spain and Portugal. And it would substitute a synthetic product, whose production consumes large amounts of chemicals and energy, for a natural and biodegradable one. If sustainability were ever to be translated into practical reality, cork would win every time.

Legal Protections
National and regional laws in Spain and Portugal forbid the cutting or digging out of cork and other dehesa-montado trees. Authorization to do so is rarely given, except when trees are dead or diseased. Still, rumors abound that trees are sometimes removed or cut illegally to make way for more productive crops or real estate. 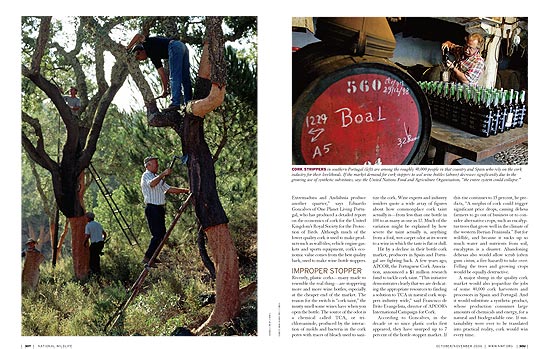 More important, perhaps, is the protection that Spain and Portugal, as member states of the European Union (EU), are now obliged to give to large areas of dehesa to implement the EU's Habitats Directive, which identifies dehesa as one of Western Europe's most important conservation priorities. To date, the Spanish government has proposed 1,850 square miles and the Portuguese government 460 square miles for protection under the directive--about 18 percent of the total dehesa habitat within the two countries.

But designating large areas for protection will be of no use unless tree survival is guaranteed long term. "EU subsidies have encouraged too much grazing," says Díaz, "so there are very few young trees to replace the existing ones." Though some farmers plant trees using government grants, "many die because it is so dry in summer," he says. "What is needed is a rotation on farms so that parts of the dehesa are left ungrazed for 20 years for young trees to grow naturally."

Drink to Wildlife
It's easy to see why dehesa is such an important wildlife habitat. "Up to 60 different plant species can be found in a square yard of dehesa turf," says Díaz. "More diverse communities of butterflies and small birds are supported by the habitat, too, than by neighboring woodland and grassland. Dehesa with scrub--lavenders, brooms and halimium--tend to have more warblers and blackbirds, while those with areas of cereal crops attract crested larks and corn buntings."

In winter, when frosts and cold winds bite, the dehesas are hearth and home to most of northwestern Europe's 60,000 common cranes. At this quieter time of year, too, a vast army of other northern European breeding birds--including masses of robins and black redstarts--are camped out in the trees where many insects keep the birds fed.

Conserving this magnificent habitat is easy enough, even if you live a world away from Western Europe's dehesas. Whether sipping champagne at a birthday party or having a bottle of red wine at your favorite restaurant, insist on a bottle stopped with real cork, and then raise your glass to sustainable agriculture. Salud!

Malcolm Smith, a board member of the United Kingdom's Environment Agency, writes on wildlife, environment and travel for several national and international magazines and newspapers.