The U.S. Fish and Wildlife Service is pushing ahead with plans to remove the park’s biggest bruin from the federal endangered species list within the next year. 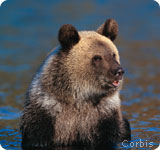 THE GRIZZLY BEAR of the American West was once the monarch of all it surveyed, a vast range of prairies and mountains from the central Great Plains to the Pacific coast. But by the mid-1970s, guns and traps, poisons, snares and loss of habitat had reduced the species in the West from an estimated 50,000 animals to fewer than 800, with perhaps 200 of them languishing in and around Yellowstone National Park.
But the grizzly held on like the survivor it is and now numbers perhaps 1,200 south of the Canadian border. More than 600 of these bears live in the Yellowstone Ecosystem, which centers on the park and six adjacent national forests. There, grizzlies have been increasing at the rate of 4 to 7 percent annually for at least the past 15 years. Only one other population seems to be increasing--the little-studied bears of the Northern Continental Divide Ecosystem, centered in and around northwestern Montana's Glacier National Park. Other populations are barely holding on in federally designated grizzly recovery areas in the Selkirk, Cabinet-Yaak and Northern Cascades. No grizzlies survive in the recovery area centered on the Selway-Bitterroot wilderness areas, where NWF efforts to reintroduce more grizzlies under a program worked out with timber interests and state and federal agencies has been stalled by the Bush administration.

In Yellowstone, grizzly population growth has led the U.S. Fish and Wildlife Service (FWS) to propose ending the park bears' 30-year status as threatened under the Endangered Species Act. "All recovery goals for grizzly bears in Yellowstone have been met or exceeded," says Tom France, director of NWF's Northern Rockies Project Office in Missoula, Montana. "The bear's rebound is a magnificent wildlife recovery story proving that the Endangered Species Act is working as the nation's safety net for rescuing species from extinction."

FWS set specific recovery goals for Yellowstone grizzly bears in 1993. The population must include at least 15 adult females with cubs each year, and mothers with cubs must occupy at least 16 of the 18 federal bear management units that compose the 5.9-million-acre Yellowstone Primary Conservation Area. These goals have been achieved. Each year since 1999, biologists have counted at least 40 Yellowstone females with cubs, and in four of the last six years, adult females with young have occupied all 18 bear management units. Moreover, human-caused mortality is well below levels that the population can absorb. "A key Endangered Species Act objective is self-sustaining populations in the wild," says Steve Torbit, a scientist who serves as director of the NWF Rocky Mountain Natural Resource Center in Boulder. "That objective has been reached in Yellowstone."

Under the Endangered Species Act, once a plant or animal's recovery goals are met, federal protection is supposed to cease provided that adequate protections are in place to prevent a renewed decline. In the case of Yellowstone grizzlies, after delisting the bears will be managed by state wildlife agencies in Wyoming, Montana and Idaho. NWF helped enlist the governors of those states in a process that produced local plans for grizzly management. NWF also was instrumental in doubling designated Yellowstone grizzly habitat, from 6 million acres to more than 12 million. "Central to the strategy is the Primary Conservation Area," France says. "This land is 98 percent federally managed, and no new development will be permitted on it without compensatory reductions in human activities elsewhere."

Opponents of the delisting fear that habitat protection will be weakened and that the states could open hunting seasons on the bears. In fact, each state has identified potential habitat to accommodate expanding grizzly populations. On national forests in the area, livestock grazing will become gradually more restricted, helping to reduce potentially fatal conflicts with bears. "All of the state plans do have an option for a hunting season at some point," says Sterling Miller, an NWF senior wildlife biologist and grizzly bear expert, "but they also commit to mortality quotas that keep hunting from exceeding sustainable levels. If mortality is close to the quota, there will be no hunting. The state plans also commit to full protection of females with offspring up to 2 years old."

Under the FWS plan, only grizzlies in the Yellowstone ecosystem would be delisted. In other areas, grizzly recovery still requires intensive management, including reintroductions of bears to habitat where they were wiped out years ago. "Now that we have achieved success in the Yellowstone area, we can bring attention and resources to conserving other grizzly populations," France says. "The species' recovery has lagged in the Cabinet-Yaak, Selkirk, Northern Cascades and Bitterroot areas. With Yellowstone bears returned to local control, federal efforts can focus on these more-beleaguered populations and habitats."

Grizzly recovery offers promise for more than just the bears, however. "The success in Yellowstone rebuts opponents of the Endangered Species Act who say the law doesn't work," France says. "If the law can yield the recovery of America's largest carnivore, a creature that requires millions of acres of wild country, then it can benefit almost any beleaguered species."

The Bear Facts
Adult female grizzlies generally weigh 250 to 350 pounds, males 400 to 600 pounds. At full tilt, they can hit speeds up to 35 miles per hour. Males need a home range of about 335 square miles, females about a third that. On average, grizzlies live from 15 to 20 years, although several Yellowstone bears have lived almost 30 years.