In India's Ranthambore National Park, and across the species' shrinking Southeast Asian range, tigers are besieged by poachers fueling a booming illegal trade in skins and body parts 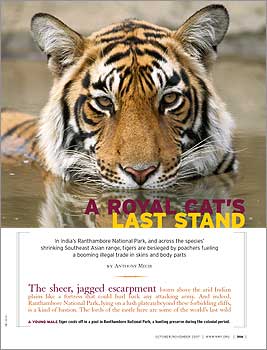 THE SHEER, JAGGED ESCARPMENT looms above the arid Indian plains like a fortress that could hurl back any attacking army. And indeed, Ranthambore National Park, lying on a lush plateau beyond these forbidding cliffs, is a kind of bastion. The lords of the castle here are some of the world's last wild tigers, and they're under a relentless siege. The park and its denizens are beset by a host of hostile forces: impoverished tree-cutters, cattle grazers, tourists and--especially--cunning poachers.

Created in 1955, the 150-square-mile park's forests, ravines and necklace of idyllic lakes had been a tiger hunting preserve in an era when British colonials and local rulers across India indulged in the "sport of kings" (one potentate, the Nawab of Tonk, proudly dispatched more than 600 of the cats). During the park's heyday in the late 1980s, former wardens remember "a tiger around every bush." Today only between 25 and 30 survive in Ranthambore.

Accompanied by Belinda Wright, one of India's leading wildlife conservationists, I saw four of these magnificent creatures emerge from tall grass fringing the park's Lake Rajbagh and pad right past our safari jeep. Striding ahead was Machuli, a majestic tigress and four-time mother. Trailing her was a trio of adorably awkward cubs, which cried out whenever she left them too far behind. We watched Machuli calmly escort the cubs back to the grass, where they promptly pounced on her, staged mock attacks on insects and grabbed each other's tails. 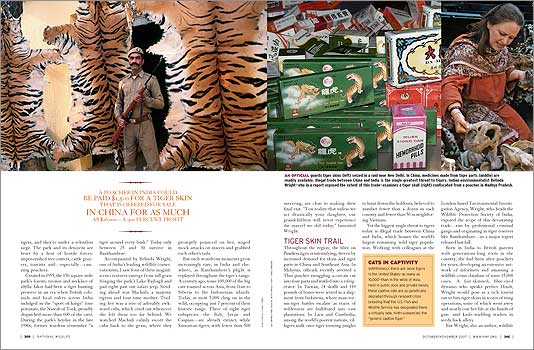 But such wondrous moments grow increasingly rare, in India and elsewhere, as Ranthambore's plight is replayed throughout the tiger's range. A century ago, some 100,000 of the big cats roamed across Asia, from Iran to Siberia to the Indonesian islands. Today, at most 5,000 cling on in the wild, occupying just 7 percent of their historic range. Three of eight tiger subspecies--the Bali, Javan and Caspian--are already extinct, while Sumatran tigers, with fewer than 500 surviving, are close to making their final exit. "You realize that unless we act drastically your daughter, our grandchildren will never experience the marvel we did today,'' lamented Wright.

TIGER SKIN TRAIL
Throughout the region, the blitz on Panthera tigris is intensifying, driven by increased demand for skins and tiger parts in China and Southeast Asia. In Malaysia, officials recently arrested a Thai poacher smuggling a carcass cut into four parts and stuffed into a refrigerator. In Taiwan, 24 skulls and 310 pounds of bones were seized in a shipment from Indonesia, where man-versus-tiger battles escalate as tracts of wilderness are bulldozed into vast plantations. In Laos and Cambodia, among the world's poorest nations, villagers stalk once tiger-teeming jungles to hunt down the holdouts, believed to number fewer than a dozen in each country and fewer than 50 in neighboring Vietnam.

Yet the biggest single threat to tigers today is illegal trade between China and India, which houses the world's largest remaining wild tiger population. Working with colleagues at the London-based Environmental Investigation Agency, Wright, who heads the Wildlife Protection Society of India, exposed the scope of this devastating trade--run by professional criminal gangs and originating in tiger reserves like Ranthambore--in a major report released last fall.

Born in India to British parents with generations-long roots in the country, she had been after poachers for years, developing an extensive network of informers and amassing a wildlife crime database of some 15,000 cases. A fair-skinned, blue-eyed dynamo who speaks perfect Hindi, Wright would pose as a rich tourist out to buy tiger skins in scores of sting operations, some of which went awry and nearly cost her life at the hands of gun- and knife-wielding traders in seedy back alleys.

But Wright, also an author, wildlife photographer and award-winning filmmaker, persisted. She and her teams tracked the tribal hunters who make tiger kills using steel jaw traps, poison, electrocution and guns. They followed the hunters' wives who secret the animals' body parts in their clothing or in bags before passing them to middlemen who prepare the bones and skins in a network of tanning centers. 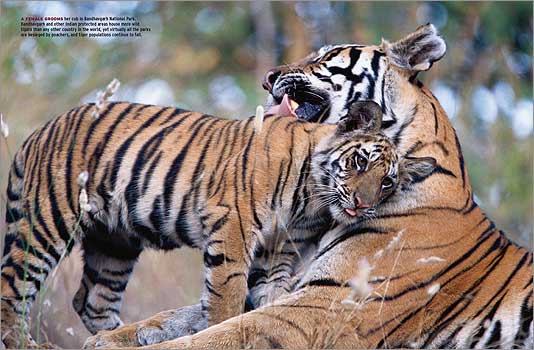 Next, traders with international connections take over. Following ancient, Himalayan trade routes for salt, spices and wool, they smuggle their cargo aboard mules and trucks into Tibet and southern China. The borders are rugged and porous, and many frontier officials are eminently bribable. At each handoff, the value of the dead tiger increases: A poacher in India could be paid $1,500 for a skin that is offered for sale in China for as much as $16,000--a 900 percent profit. Meanwhile, the minimum fine faced by tiger skin traders in India is about $240.

FELINE PHARMACY
What Wright discovered at the end of this "tiger skin trail" horrified her. As she and her colleagues posed as curious tourists or buyers, she believed she recognized the lifeless remnants of creatures she had known in the wild, now illegally--but openly--on sale. Around her, tiger skins were flaunted as a fashion statement and sign of wealth on chumpas, traditional Tibetan costumes worn for weddings and festivals. One presenter even appeared with a skin-fringed garment on television. At a festival, the investigators came across a ceremonial tent stitched from 108 tigers.

In the wake of Wright's exposure--and a passionate plea by Tibet's spiritual leader, the Dalai Lama, to end the slaughter--many Tibetan communities publicly burned their tiger skins. But the flow of skins and parts out of India has not stopped. Wright has since detected greater sales to wealthy Chinese for home décor and prestigious gifts, while old wives' tales that turned the tiger into a walking pharmacy and sex clinic persist. Dating back more than a thousand years, prescriptions of traditional Chinese medicine include whiskers for toothache, bones to cure rheumatism, even dung to get drunks off the booze. Scientists estimate there may be as few as 1,800 tigers in India today, down from some 40,000 a century ago. 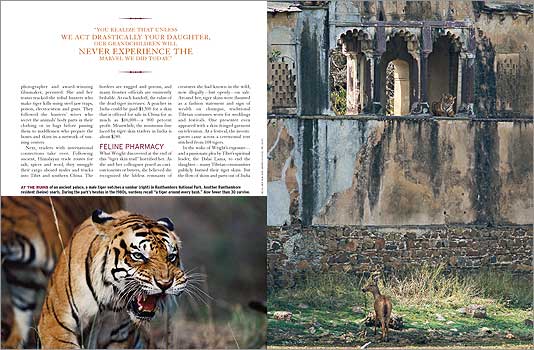 Although the Beijing government halted legal trade in tiger parts in 1993, it is now considering lifting the ban, with supporters arguing that tiger products would come not from the wild but from some 4,000 captives on Chinese "tiger farms." Wright and other conservationists say such a move would increase demand for tiger products, creating further incentives for poaching the cats and opportunities for wild tiger parts to enter a legal trade. According to Susan Lieberman, who directs the Global Species Program of the World Wildlife Fund, reopening legal trade in tiger parts of any kind could be "the final act that drives the tiger towards extinction."

SEARCH FOR SOLUTIONS
Though reasons for the staggering decline of tigers are clear, solutions remain elusive. "Enforcement," insists Wright. "I thought I'd be the last person to say that, but the stick works." Yet Rajesh Gopal, head of the Indian government's Project Tiger, argues that the key is improving the lives of the hundreds of thousands of dirt-poor villagers who live within and around core tiger areas. "Even if you deploy the entire Indian army you won't save the tiger," he says. "You really need a people's army on your side that can coexist with tigers and help to save them."

In a handful of tiger habitats, international initiatives provide at least some hope. Tiger Forever, for example, is an effort by the Wildlife Conservation Society to increase tiger populations in key ranges by 50 percent over the next decade. One such place is Burma's Hukaung Valley, the world's largest protected area for tigers, which may have potential for sustaining more of the big cats than any other place on Earth.

At Ranthambore, on the frontlines of the war to save tigers, Phool Chand is one of a few dozen woefully underpaid and aging rangers working in the park. The 30-year veteran still suffers from injuries inflicted by trespassing cattle grazers who nearly beat him to death. We dropped Chand off to begin his rounds one cold morning, armed only with a big stick, ready to spend many lonely hours confirming a daily roll call of the park's tigers.

From the forest came the plaintive song of a green pigeon. Troops of langurs were monkeying around, and a mugger crocodile skimmed across the water. A sambar walked gingerly through the shallows of Lake Rajbagh, then froze, stamped her foot, raised her tail and uttered an alarm call. Perhaps she sensed the presence of the tiger Machuli, also known as Lady of the Lake because she haunts its shores. It was a fairy tale atmosphere, heightened by the ruins and remnants of forgotten civilizations going back a thousand years.

"The reason I love Ranthambore so much is that it is one of the few places in the world where wildlife took over from man," said Wright. "It gives you hope that maybe the tigers have a chance to come back."

Anthony Mecir is a Bangkok-based writer focusing on wildlife and environmental issues.

Some Good News for Tigers

In a rare bit of good news from the fight to save imperiled tigers, conservationists who visited this year's Litang Tibetan horse festival in the Chinese province of Sichuan saw no participants wearing skins of the cats or other endangered species. This was in sharp contrast to previous years, when hundreds of officials as well as performers dressed in outfits decorated with tiger, leopard and otter skins. Observations from the annual August festival were made by representatives of the United Kingdom-based Environmental Investigation Agency and the Wildlife Protection Society of India, organizations that for the past two years have conducted intensive public awareness campaigns in the Litang region about the plight of the Asian tiger.

This summer's dramatic decline in skins used as costumes "shows that where there's a will there's a way," says Wildlife Protection Society of India Chief Executive Belinda Wright. "Now we need to see the same level of commitment and investment from governments in the region to break the criminal networks that control the trade." Though illegal, trade in tiger skins as well as body parts--used in traditional Chinese medicine--still thrives elsewhere in the region. According to Wright, recent reports suggest that the number of wild tigers is continuing to fall, with only about 3,000 remaining, about half of them in India.--Laura Tangley