In her quest to photograph all 22 species of albatross, the author observed some of the avian family's most remarkable feats in some of the planet's most far-flung places 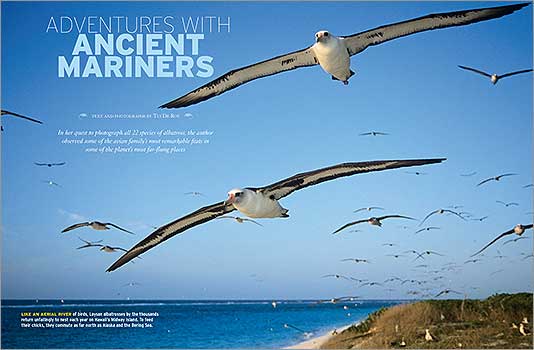 EACH YEAR in late October, a natural miracle begins to unfold—uncelebrated and almost unseen—along the chain of islands that make up Hawaii’s northwesterly outposts. On Midway Island, nearly 1 million Laysan albatrosses materialize from the vastness of the ocean in a matter of a week or two, soon followed by another 50,000 or so black-footed albatrosses. From windswept tranquility to a hubbub of breeding fervor, this sandy smudge of a coral atoll, barely 1,540 acres and about as far from any continent as you can get, turns into a blur of sound and motion.
By the time my plane touched down on Midway after a three-hour flight from Honolulu, this annual explosion of life was already three months underway. Beady-eyed, fluffy chicks were popping out of eggs all over the island, an adorable highlight of my decades-long quest to photograph the world’s albatross species.

My fascination with these remarkable seabirds began on the Galápagos Islands when, as a fledgling 16-year-old photographer, I caught sight of a waved albatross, a striking bird with cocky, jutting eyebrows, an exceptionally long, bright yellow beak and finely marbled breast feathers. In the 35 years since that encounter, I’ve succeeded at photographing all but 3 of 22 species of albatross. To find them, I’ve not only visited some of the world’s remotest specks of land, but covered tens of thousands of sea miles—on large ships, fishing boats, sailing yachts, even inflatable dinghies—surviving rogue waves, ferocious storms and some of the hairiest landings imaginable.

Albatrosses are just the sort of birds to spark such obsession. They are, for one thing, among the world’s longest-lived birds, with some species surviving 50, 60 and perhaps even 70 years. With a maximum body weight of 26 pounds—and wingspans reaching more than 11 feet—the southern royal and some of the wandering albatrosses are also the largest sea birds on the planet. 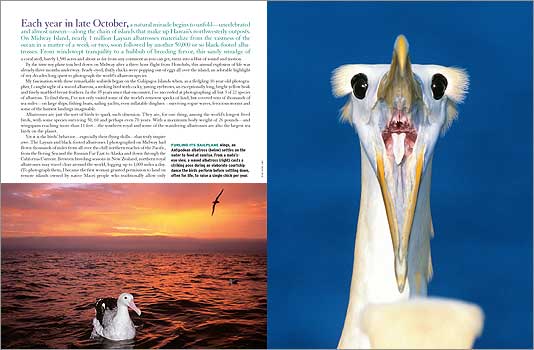 Yet it is the birds’ behavior—especially their flying skills—that truly inspire awe. The Laysan and black-footed albatrosses I photographed on Midway had flown thousands of miles from all over the chill northern reaches of the Pacific, from the Bering Sea and the Russian Far East to Alaska and down through the California Current. Between breeding seasons in New Zealand, northern royal albatrosses may travel clear around the world, logging up to 1,000 miles a day. (To photograph them, I became the first woman granted permission to land on remote islands owned by native Maori people who traditionally allow only male visitors.) One grey-headed albatross tracked by satellite after nesting on South Georgia Island ventured twice around the planet before coming back to breed, while another completed a round-the-world tour in just 46 days.

The birds can accomplish such feats because they are highly efficient flyers, harnessing the combined forces of wind and gravity to propel themselves thousands of miles with hardly any exertion. They do this by cruising only in the windiest regions of the planet—particularly the outer fringes of the Antarctic and the North Pacific—careening rhythmically up and down through wind gradients over the sea (wind blows faster higher above the water than near the surface) in a technique called dynamic soaring. Rising sharply into the wind, then veering and dropping downwind into the wave trough over and over again, they can maintain speed and propulsion for hours or even days without a single wingbeat.

Albatrosses also are remarkable navigators, traveling as precisely across trackless oceans as we do on well-worn commuter routes. One northern royal albatross, tracked during two consecutive years, showed up at the same feeding ground off South Africa on the very same day it had the year before.

One thing all albatrosses share is a need for total isolation to nest, almost invariably choosing islands as far as possible from humans and land-based predators. Most of the birds breed on the same island they come from—sometimes within a few feet of where they hatched. After four to eight years at sea, young albatrosses return to these natal colonies to join up in multiyear courtship dances before finally settling down with a mate at five to ten years of age. Sometimes in pairs, other times in groups of up to a dozen or more, the birds bow and gape, pirouette and curtsy, rattle their bills, coo, moan, yodel and scream, all with exquisite elegance and cadence as they seek out partners they often remain with for life.

Selecting the right mate is critical for an albatross because the birds mate infrequently, produce just a single egg per season and expend considerable amounts of energy and time—more than a year, including incubation—raising their lone chick. Some southern species, including the young Antipodean albatrosses I watched preparing to fledge on subantarctic Antipodes Island, take so long to complete the breeding cycle that they nest only every other year. Grey-headed albatrosses I photographed on Diego Ramirez Island off Cape Horn take a year’s sabbatical between summer nesting seasons. And little known light-mantled albatrosses, which I watched on Macquarie Island south of Australia, may not return to breed for three or four years, making them the slowest reproducing of any bird species. 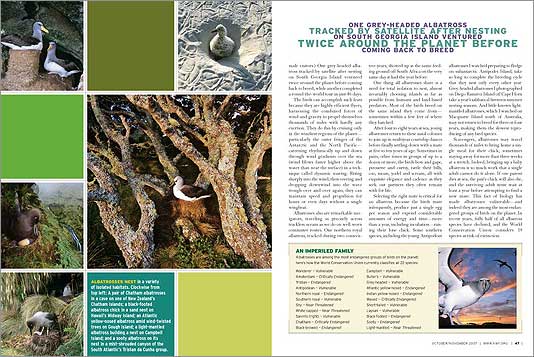 Scavengers, albatrosses may travel thousands of miles to bring home a single meal for their chick, sometimes staying away for more than three weeks at a stretch. Indeed, bringing up a baby albatross is so much work that a single adult cannot do it alone. If one parent dies at sea, the pair’s chick will also die, and the surviving adult must wait at least a year before attempting to find a new mate. This fact of biology has made albatrosses vulnerable—and indeed they are among the most endangered groups of birds on the planet. In recent years, fully half of all albatross species have declined, and the World Conservation Union considers 19 species at risk of extinction. 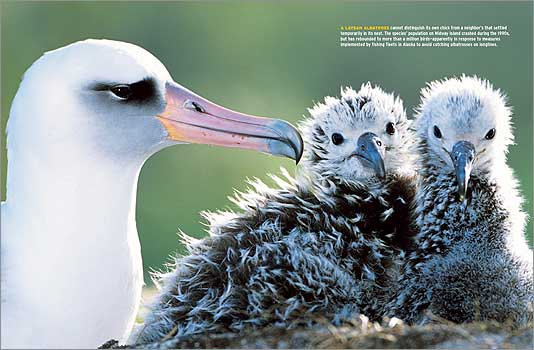 Neither the remotest islands nor the widest oceans have been safe havens for albatrosses. During the late 1800s and early 1900s, populations of some species, including Laysan, black-footed and short-tailed albatrosses, were decimated by feather hunters. More recently, nonnative species ranging from pigs and cats to house mice have been introduced onto the birds’ nesting islands, wiping out eggs, chicks and even the adults of species that evolved without terrestrial predators. But by far the biggest danger to albatrosses today comes from vast offshore commercial fishing fleets, many working unregulated in international waters. Irresistibly drawn to fish scraps in the wakes of the ships, tens of thousands of albatrosses have drowned on longline fishhooks and deep-sea trawl cables over the past several decades.

Fortunately, the tide is beginning to turn for some species. A global network of government and nongovernment conservation organizations, spearheaded by BirdLife International and others, is working with fishing fleets to implement seabird-friendly fishing methods—limiting discharge of tempting fish scraps, setting baited lines at night, and hanging streamers off the sterns of ships to scare birds away, for example. While the oceans are far too vast to patrol, and more work remains to raise the environmental awareness of high-seas fishermen, some albatross populations are already showing encouraging gains.

On Midway, for instance, a 2006 census tallied 487,527 nests of Laysan albatrosses and 24,085 of black-footed albatrosses, up from 408,133 and 21,829 the year before and the highest numbers since counts began in 1991. After years of steady population declines during the 1990s, Midway provides a promising success story that reflects the joint work of the U.S. Fish and Wildlife Service and Alaskan fishing fleets to avoid killing albatrosses at one of their major feeding sites.

Among the nesting masses on Midway one sunny morning I spotted a much larger and more colorful bird: a lone short-tailed albatross visiting from Torishima Island near Japan, where a few hundred now nest after recovering from a close brush with extinction at the hands of feather hunters last century. Two of these splendid birds, a male and a female, are known to visit Midway from time to time, although they haven’t yet met up. As I watched the bird’s graceful—though unsuccessful—attempts to woo her smaller cousins, she gave me hope that this exceptionally beautiful species could someday become Hawaii’s third resident albatross.

Albatrosses are among the most endangered groups of birds on the planet; here’s how the World Conservation Union currently classifies all 22 species: