Images from an Urban Oasis

More than 200 bird species are regularly spotted in New York's Central Park, and one remarkably patient photographer has spent thousands of hours capturing their behavior on film 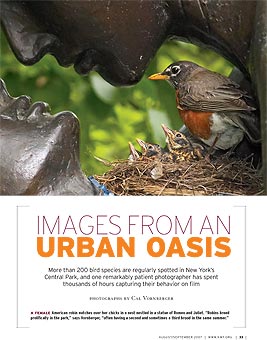 The son of a photographer who grew up catching tadpoles and garter snakes in the woods behind his suburban Michigan home, Cal Vornberger developed an early appreciation both for photography and the natural world. His career as a wildlife photographer, however, came about almost by accident.

In 2001, after he sold a Manhattan-based web design company he had run for more than a decade, Vornberger was hoping to pursue a lifelong dream of becoming a travel photographer. But when terrorists attacked the World Trade Center that September, derailing the travel industry and his plans, he was uncertain what to do next—until on an afternoon stroll through Central Park, camera in hand, he happened upon a great egret fishing in Turtle Pond.

“At the time, I didn’t even know what kind of bird it was,” recalls Vornberger, “and although my lens wasn’t long enough to get a decent image of the bird, I just started shooting it.” Many hours and rolls of film later, he had taken more than 200 photos of the egret. “I was hooked,” he says.

After purchasing longer lenses and a field guide to U.S. birds, Vornberger signed up for a course taught by veteran wildlife photographer Arthur Morris. Soon he was spending nearly every day in Central Park—spring, summer, fall and winter. “I’m usually up by 4 a.m. and out the door by sunrise,” Vornberger says. Over the past six years, he has spent thousands of hours photographing birds in the park, which he describes as “a vast green oasis in the middle of a sea of concrete.”

By now, Vornberger has learned nearly as much about birds as the legions of birders who routinely flock to the park, especially during spring and fall migration. “But my perspective is different than theirs,” he says. “I’ll stay in one place for three or four hours, just observing and waiting to get a good shot. Most birders are gone as soon as they spot a bird, which means they miss a lot of interesting behaviors.”

Vornberger strives to capture what he calls the “inner bird,” which he believes has beauty no matter how common the species. “I’d rather have a good, expressive photo of a pigeon,” he says, “than a dull, lifeless photo of a boreal owl.” His goal is for an image to have an emotional impact on the viewer. Noting that many eastern birds—like wildlife worldwide—are declining, Vornberger says, “It’s because we no longer feel an emotional connection to the environment and its inhabitants that we are destroying our natural heritage.”—Laura Tangley 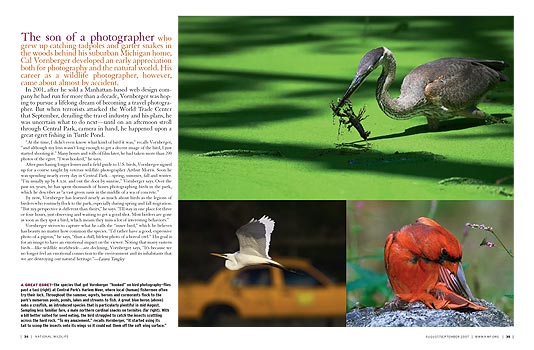 A GREAT EGRET—the species that got Vornberger “hooked” on bird photography—flies past a taxi (bottom left) at Central Park’s Harlem Meer, where local (human) fishermen often try their luck. Throughout the summer, egrets, herons and cormorants flock to the park’s numerous pools, ponds, lakes and streams to fish. A great blue heron (top) nabs a crayfish, an introduced species that is particularly plentiful in mid-August. Sampling less familiar fare, a male northern cardinal snacks on termites (bottom right). With a bill better suited for seed eating, the bird struggled to catch the insects scuttling across the hard rock. “To my amazement,” recalls Vornberger, “it started using its tail to scoop the insects onto its wings so it could eat them off the soft wing surface.” 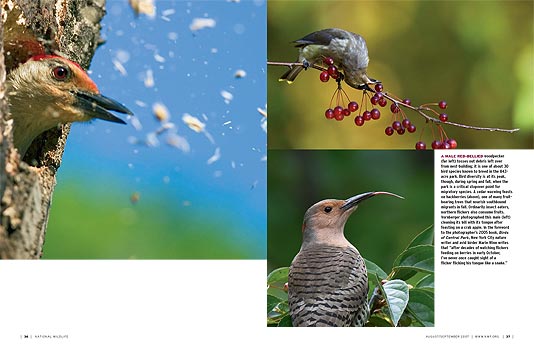 Photos: © CAL VORNBERGER
A RED-BELLIED woodpecker (left) tosses out debris left over from nest-building; it is one of about 30 bird species known to breed in the 843-acre park. Bird diversity is at its peak, though, during spring and fall, when the park is a critical stopover point for migratory species. A cedar waxwing feasts on hackberries (top right), one of many fruit-bearing trees that nourish southbound migrants in fall. Ordinarily insect eaters, northern flickers also consume fruits. Vornberger photographed this one (bottom right) cleaning its bill with its tongue after feasting on a crab apple. In the foreword to the photographer’s 2005 book, Birds of Central Park, New York City nature writer and avid birder Marie Winn writes that “after decades of watching flickers feeding on berries in early October, I’ve never once caught sight of a flicker flicking his tongue like a snake.” 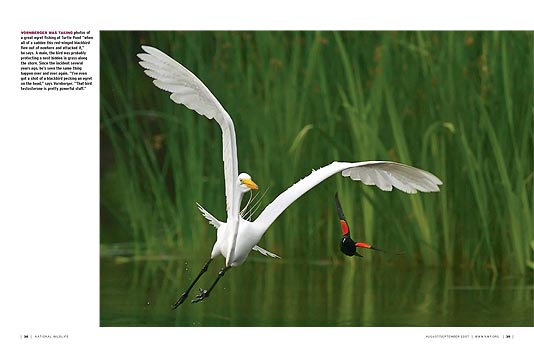 Photo: © CAL VORNBERGER
VORNBERGER WAS taking photos of a great egret fishing at Turtle Pond “when all of a sudden this red-winged blackbird flew out of nowhere and attacked it,” he says. A male, the bird was probably protecting a nest hidden in grass along the shore. Since the incident several years ago, he’s seen the same thing happen over and over again. “I’ve even got a shot of a blackbird pecking an egret on the head,” says Vornberger. “That bird testosterone is pretty powerful stuff.”