A chance to howl with wild red wolves provides thrills, along with lessons about the plight of these endangered carnivores 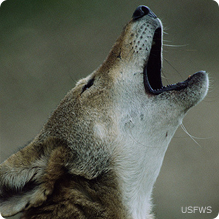 Night has fallen on North Carolina's Alligator River National Wildlife Refuge, and it's hard to hear over the croaking frogs and shrill whistle of mosquitoes. Still, on a rustic road deep in cypress and gum tree wetlands, a group of tourists and I are listening intently. Finally, it comes: the unmistakable call of the wild, a piercing, mellifluous wolf howl. "Did you hear that?" the kids in the group murmur excitedly, breaking a vow to remain silent.

The kids settle down again, squinting at a curve of dark road that sparkles with late-evening fireflies. Parents sweep their flashlights nervously around our tight circle. Then, faintly, the chorus begins again, a series of yips and yaps resounding from the darkness.

It's also the only spot where the public can communicate with the rare carnivores. Since 1997, a local nonprofit group, the Red Wolf Coalition, has taken thousands of people into the refuge for evening "howling safaris," hoping to dispel lupine myths along the way. (Wolves don't attack people, for example.) Inevitably, a visitor's first question is whether they can see the wolves, says Coalition Director Kim Wheeler. Her answer: No such luck. "As much as we want to see them, the integrity of the program is based on the fact we cannot see them," she says.

The coalition—which holds howlings every Wednesday evening in summer—views the popular events as opportunities to drive home their core message: Without wolves, nature falls out of sync. Wolves often target sick and weak animals, for instance, keeping populations of their prey—such as white-tailed deer, raccoons, rabbits and rodents—healthy.

That sentiment was not shared by early European settlers, who shot, trapped and poisoned hundreds of wolves, fearing the predators posed a threat to livestock. Widespread clearing of hardwood forests, meanwhile, eliminated the species' prime habitat. By the 1970s, the red wolf—which once roamed throughout the eastern United States as far north as Pennsylvania—was close to extinction, with fewer than 20 of the animals left in isolated pockets of habitat in Texas and Louisiana.

In 1973, in a last-ditch effort to save the species, the U.S. Fish and Wildlife Service (FWS) captured all of these remaining wolves and placed them in a captive breeding program. Fourteen years later, eight captive wolves were introduced to the Alligator River refuge, the first time a species extinct in the wild was released back into its native habitat.

The wolves thrived. Today between 100 and 120 animals maintain about 17 packs of 5 to 8 animals on 1.7 million acres of refuge and adjacent private lands. Some 500 pups have been born in the wild. FWS, in partnership with the Tacoma, Washington-based Point Defiance Zoo and Aquarium, still maintains the captive breeding program, with a goal of 220 animals in the wild and 330 in captivity—enough to ensure a strong and viable population. (As of May 2007, the captive red wolf count stood at around 168.) "The wolves have lived up to our highest expectations—staying out of trouble, defining their home ranges, supporting themselves and producing pups each year," says FWS wildlife biologist Michael Morse.

Unfortunately, some wolves also have been known to mate with coyotes, which, though not native to the wolf's original range, have spread eastward over the past few decades. Scientists say that interbreeding with coyotes, which dilutes the wolf's genetic purity, poses the most serious threat to the species' long-term survival. To combat the problem, FWS biologists trap and sterilize some coyotes, returning them to the refuge to prevent breeding coyotes from taking their places.

Another threat is humans. Although wolves try to avoid people, a few have been hit by cars or accidentally shot by hunters. The reintroduction also has had its detractors. A handful of vocal landowners worried that the predators would wipe out local livestock, a fear that proved unfounded.

But the majority of people in this rural corner of North Carolina have accepted the wolves' homecoming. More than 60 percent of the wolves' current territory, in fact, falls on private land whose owners have welcomed the predators. There have been no malicious killings by people, says Morse, who believes the two species are peacefully coexisting. "We don't need you to love wolves; we just need you to give them a chance," he says.

At the refuge, Wheeler encourages the kids to respond to the wolves. "The chance to howl at a wolf and have it howl back is a one-of-a-kind experience," she tells us. "No giggling!" she whispers as the children squirm out of their parents' grips and take a few tentative steps away from the group. Hands cupped to their mouths, they belt their loudest howls into the muggy night. But the wolves stay silent. "After a while, they're just done with us," Wheeler says with a laugh.

Christine Dell'Amore is a writer based in Washington, D.C. For more information about the howling program, see www.redwolves.com.

Red wolves mate for life, producing between three and five pups every spring and raising them in dens dug out from hollow tree trunks, stream banks, and even drainpipes or culverts. Young adults will often stay with their parents a year or two, pitching in to help raise their younger siblings.