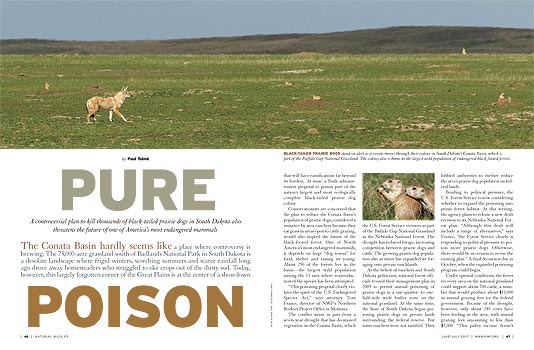 THE CONATA BASIN hardly seems like a place where controversy is brewing. The 73,000-acre grassland south of Badlands National Park in South Dakota is a desolate landscape where frigid winters, scorching summers and scarce rainfall long ago drove away homesteaders who struggled to eke crops out of the dusty sod. Today, however, this largely forgotten corner of the Great Plains is at the center of a showdown that will have ramifications far beyond its borders. At issue: a Bush administration proposal to poison part of the nation's largest and most ecologically complete black-tailed prairie dog colony.

Conservationists are concerned that the plan to reduce the Conata Basin's population of prairie dogs, considered a nuisance by area ranchers because they eat grass in areas open to cattle grazing, would also imperil the future of the black-footed ferret. One of North America's most endangered mammals, it depends on large "dog towns" for food, shelter and raising its young. About 250 of the ferrets live in the basin--the largest wild population among the 13 sites where reintroduction of the species has been attempted.

The conflict stems in part from a seven-year drought that has decimated vegetation in the Conata Basin, which the U.S. Forest Service oversees as part of the Buffalo Gap National Grassland in the Nebraska National Forest. The drought has reduced forage, increasing competition between prairie dogs and cattle. The growing prairie dog population also at times has expanded its foraging onto private ranchlands.

At the behest of ranchers and South Dakota politicians, national forest officials revised their management plan in 2005 to permit annual poisoning of prairie dogs in a one-quarter- to one-half-mile wide buffer zone on the national grassland. At the same time, the State of South Dakota began poisoning prairie dogs on private lands surrounding the federal reserve. But some ranchers were not satisfied. They lobbied authorities to further reduce the area's prairie dog population on federal lands. 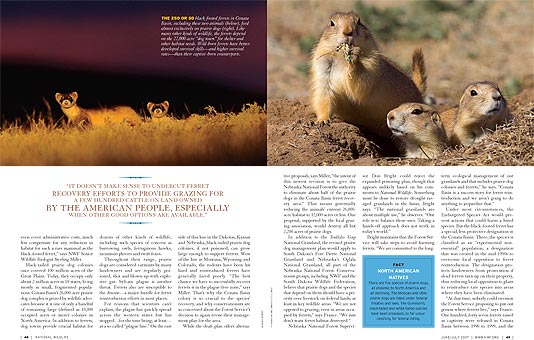 Bending to political pressure, the U.S. Forest Service is now considering whether to expand the poisoning into prime ferret habitat. At this writing, the agency plans to release a new draft revision to its Nebraska National Forest plan. "Although this draft will include a range of alternatives," says France, "the Forest Service clearly is responding to political pressure to poison more prairie dogs. Otherwise, there would be no reason to revise the existing plan." A final decision is due in October, when the expanded poisoning program could begin.

Under optimal conditions, the ferret recovery area on the national grassland could support about 700 cattle, a number that would produce about $11,000 in annual grazing fees for the federal government. Because of the drought, however, only about 240 cows have been feeding in the area, with annual grazing fees amounting to less than $3,300. "This paltry income doesn't even cover administrative costs, much less compensate for any reduction in habitat for such a rare mammal as the black-footed ferret," says NWF Senior Wildlife Biologist Sterling Miller.

Black-tailed prairie dog colonies once covered 100 million acres of the Great Plains. Today, they occupy only about 2 million acres in 10 states, living mostly in small, fragmented populations. Conata Basin's 26,000-acre prairie dog complex is prized by wildlife advocates because it is one of only a handful of remaining large (defined as 10,000 occupied acres or more) colonies in North America. In addition to ferrets, dog towns provide crucial habitat for dozens of other kinds of wildlife, including such species of concern as burrowing owls, ferruginous hawks, mountain plovers and swift foxes.

Throughout their range, prairie dogs are considered varmints by many landowners and are regularly poisoned, shot and blown up with explosive gas. Sylvatic plague is another threat. Ferrets also are susceptible to the disease--a major hurdle for ferret reintroduction efforts in most places.

For reasons that scientists can't explain, the plague has quickly spread across the western states but has stopped--for the time being, at least--at a so-called "plague line." On the east side of this line in the Dakotas, Kansas and Nebraska, black-tailed prairie dog colonies, if not poisoned, can grow large enough to support ferrets. West of the line in Montana, Wyoming and Colorado, the rodents have been hit hard and reintroduced ferrets have generally fared poorly. "The best chance we have to successfully recover ferrets is in the plague-free zone," says Miller. That's why the Conata Basin colony is so crucial to the species' recovery, and why conservationists are so concerned about the Forest Service's decision to again revise their management plan for the area.

While the draft plan offers alternative proposals, says Miller, "the intent of this newest revision is to give the Nebraska National Forest the authority to eliminate about half of the prairie dogs in the Conata Basin ferret recovery area." That means potentially reducing the animals' current 26,000-acre habitat to 12,000 acres or less. One proposal, supported by the local grazing association, would destroy all but 2,200 acres of prairie dogs.

In addition to the Buffalo Gap National Grassland, the revised prairie dog management plan would apply to South Dakota's Fort Pierre National Grassland and Nebraska's Oglala National Grassland, all part of the Nebraska National Forest. Conservationist groups, including NWF and the South Dakota Wildlife Federation, believe that prairie dogs and the species that depend on them should have a priority over livestock on federal lands, at least in key wildlife areas. "We are not opposed to grazing, even in areas occupied by ferrets," says France. "We just don't want ferret habitat destroyed."

Nebraska National Forest Supervisor Don Bright could reject the expanded poisoning plan, though that appears unlikely based on his comments to National Wildlife. Something must be done to restore drought-ravaged grasslands in the basin, Bright says. "The national grasslands are about multiple use," he observes. "Our role is to balance those uses. Taking a hands-off approach does not work in today's world." 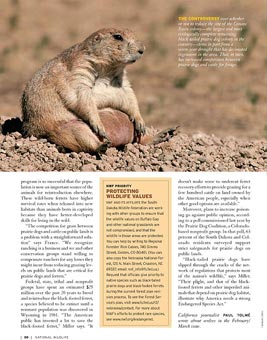 Bright maintains that the Forest Service will take steps to avoid harming ferrets. "We are committed to the long-term ecological management of our grasslands and that includes prairie dog colonies and ferrets," he says. "Conata Basin is a success story for ferret reintroduction and we aren't going to do anything to jeopardize that."

Under most circumstances, the Endangered Species Act would prevent actions that could harm a listed species. But the black-footed ferret has a special, less-protective designation in the Conata Basin. There, the species is classified as an "experimental non-essential" population, a designation that was created in the mid-1990s to overcome local opposition to ferret reintroduction. The designation protects landowners from prosecution if dead ferrets turn up on their property, thus reducing local opposition to plans to reintroduce rare species into areas where they have been eliminated.

"At that time, nobody could envision the Forest Service proposing to put out poison where ferrets live," says France. One hundred, forty seven ferrets raised in captivity were released in Conata Basin between 1996 to 1999, and the program is so successful that the population is now an important source of the animals for reintroduction elsewhere. These wild-born ferrets have higher survival rates when released into new habitats than animals born in captivity because they have better-developed skills for living in the wild.

"The competition for grass between prairie dogs and cattle on public lands is a problem with a straightforward solution" says France. "We recognize ranching is a business and we and other conservation groups stand willing to compensate ranchers for any losses they might incur from reducing grazing levels on public lands that are critical for prairie dogs and ferrets."

Federal, state, tribal and nonprofit groups have spent an estimated $25 million over the past 20 years to breed and reintroduce the black-footed ferret, a species believed to be extinct until a remnant population was discovered in Wyoming in 1981. "The American public has invested a lot to save the black-footed ferret," Miller says. "It doesn't make sense to undercut ferret recovery efforts to provide grazing for a few hundred cattle on land owned by the American people, especially when other good options are available."

Moreover, plans to increase poisoning go against public opinion, according to a poll commissioned last year by the Prairie Dog Coalition, a Colorado-based nonprofit group. In that poll, 63 percent of the South Dakota and Colorado residents surveyed support strict safeguards for prairie dogs on public lands.

"Black-tailed prairie dogs have slipped through the cracks of the network of regulations that protects most of the nation's wildlife," says Miller. "Their plight, and that of the black-footed ferrets and other imperiled animals that depend on prairie dog habitat, illustrate why America needs a strong Endangered Species Act."

NWF and its affiliate the South Dakota Wildlife Federation are working with other groups to ensure that the wildlife values on Buffalo Gap and other national grasslands are not compromised, and that the wildlife in those areas are protected. You can help by writing to Regional Forester Rick Cables, 740 Simms Street, Golden, CO 80401. (You can also copy the Nebraska National Forest, 125 N. Main Street, Chadron, NE 69337; email: nnf_info@fs.fed.us.) Request that officials give priority to native species such as black-tailed prairie dogs and black-footed ferrets during the current forest plan revision process. To see the Forest Service's plan, visit www.fs.fed.us/r2/ nebraska/contact.  More about NWF's efforts to protect rare species.