The Mystery of the Disappearing Moose

Northwestern Minnesota's moose population has declined drastically during the past few years for reasons unknown, but now one expert suspects global warming 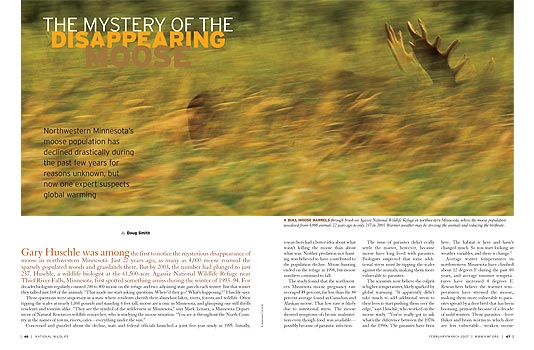 GARY HUSCHLE was among the first to notice the mysterious disappearance of moose in northwestern Minnesota. Just 22 years ago, as many as 4,000 moose roamed the sparsely populated woods and grasslands there. But by 2003, the number had plunged to just 237. Huschle, a wildlife biologist at the 61,500-acre Agassiz National Wildlife Refuge near Thief River Falls, Minnesota, first spotted something amiss during the winter of 1993–94. For decades biologists regularly counted 200 to 400 moose on the refuge and two adjoining state parcels each winter. But that winter they tallied just 164 of the animals. "That made me start asking questions. Where'd they go? What's happening?" Huschle says.

Those questions were important in a state where residents cherish their abundant lakes, rivers, forests and wildlife. Often tipping the scales at nearly 1,000 pounds and standing 6 feet tall, moose are iconic in Minnesota, and glimpsing one still thrills residents and tourists alike. "They are the symbol of the wilderness in Minnesota," says Mark Lenarz, a Minnesota Department of Natural Resources wildlife researcher, who is studying the moose situation. "You see it throughout the North Country in the names of towns, rivers, cafes--everything under the sun."

Concerned and puzzled about the decline, state and federal officials launched a joint five-year study in 1995. Initially, researchers had a better idea about what wasn't killing the moose than about what was. Neither predation nor hunting was believed to have contributed to the population decline. Moose hunting ended on the refuge in 1994, but moose numbers continued to fall.

The study found that the northwestern Minnesota moose pregnancy rate averaged 48 percent, far less than the 84 percent average found in Canadian and Alaskan moose. That low rate is likely due to nutritional stress. The moose showed symptoms of chronic malnutrition even though food was available--possibly because of parasitic infection.

The issue of parasites didn't really settle the matter, however, because moose have long lived with parasites. Biologists suspected that some additional stress must be tipping the scales against the animals, making them more vulnerable to parasites.

The scientists now believe the culprit is higher temperatures, likely sparked by global warming. "It apparently didn't take much to add additional stress to their lives to start pushing them over the edge," says Huschle, who worked on the moose study. "You've really got to ask what's the difference between the 1970s and the 1990s. The parasites have been here. The habitat is here and hasn't changed much. So you start looking at weather variables, and there is change."

Average winter temperatures in northwestern Minnesota have climbed about 12 degrees F during the past 40 years, and average summer temperatures have increased 4 degrees F. Researchers believe the warmer temperatures have stressed the moose, making them more vulnerable to parasites spread by a deer herd that has been booming, primarily because of a decade of mild winters. Those parasites--liver flukes and brain worms to which deer are less vulnerable--weaken moose and apparently contribute to chronic malnutrition. As a major cause of moose mortality, the parasites may explain the lower reproduction rates. "A variety of factors may be contributing to the decline, but ultimately I think the real driving force is the climate," says Dennis Murray, a professor at Trent University in Ontario and main author of the moose study. "The climate change is tipping the balance."

The moose study ended in 2000, but because the lead researcher, Eric Cox, died in a plane crash during the moose survey, the study is just now being formally published by Murray in a peer-reviewed publication. The study concludes that climate change, combined with the parasites and malnutrition, has caused the moose population to plunge. The number of moose at the Agassiz refuge area has continued to fall since 1993. Biologists counted only 52 last February. "It's probably a range retraction in the face of warming temperatures," Huschle says.

If temperatures remain unusually high, moose could disappear from northwestern Minnesota over the next 50 years. "There's no way the population there is viable given the current survival and reproductive rates measured in the study," Murray says. "It will go extinct unless something changes." 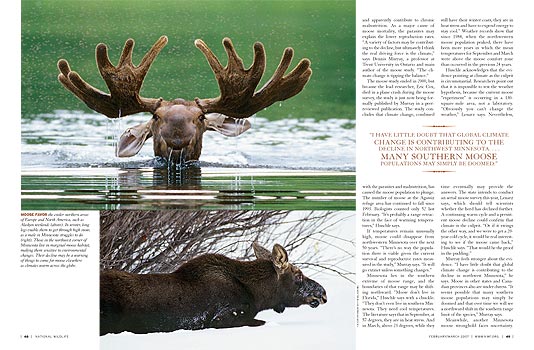 Minnesota lies in the southern extreme of moose range, and the boundaries of that range may be shifting northward. "Moose don't live in Florida," Huschle says with a chuckle. "They don't even live in southern Minnesota. They need cool temperatures. The literature says that in September, at 57 degrees, they are in heat stress. And in March, above 23 degrees, while they still have their winter coats, they are in heat stress and have to expend energy to stay cool." Weather records show that since 1984, when the northwestern moose population peaked, there have been more years in which the mean temperatures for September and March were above the moose comfort zone than occurred in the previous 24 years.

Huschle acknowledges that the evidence pointing at climate as the culprit is circumstantial. Researchers point out that it is impossible to test the weather hypothesis, because the current moose "experiment" is occurring in a 130-square-mile area, not a laboratory. "Obviously you can't change the weather," Lenarz says. Nevertheless, time eventually may provide the answers. The state intends to conduct an aerial moose survey this year, Lenarz says, which should tell scientists whether the herd has declined further. A continuing warm cycle and a persistent moose decline could confirm that climate is the culprit. "Or if it swings the other way, and we were to get a 20-year cold cycle, it would be real interesting to see if the moose came back," Huschle says. "That would be the proof in the pudding."

Murray feels stronger about the evidence. "I have little doubt that global climate change is contributing to the decline in northwest Minnesota," he says. Moose in other states and Canadian provinces also are under duress. "It seems possible that many southern moose populations may simply be doomed and that over time we will see a northward shift in the southern range limit of the species," Murray says.

Meanwhile, another Minnesota moose stronghold faces uncertainty. The northeastern area of the state, heavily forested with conifers and dotted with thousands of lakes, is home to about 7,000 of the animals. Wildlife researchers are completing a five-year study there in which moose are radio-collared and monitored.

The northeast population has held fairly steady in recent years, and the state has allowed a very limited hunt. But moose there continue to die mysteriously, too. Nonhunting moose mortality ranged from 9 to 24 percent in the first four years of the study, compared to 8 to 12 percent elsewhere in North America. During the February 2005 to February 2006 survey year, the nonhunting mortality rate was 17 percent.

Moose usually die from illness, vehicle collisions, predation or old age. However, during the past four years, biologists in the northeast found at least 15 emaciated, prime-aged, radio-collared dead moose. "We've tested for all of the diseases and parasites known to kill moose, yet the cause of death, in most cases, remains unclear," Lenarz says.

It is possible that the deaths are related to global warming, but, Lenarz says, "it's just too early to speculate." Last year, he attended a North American moose conference in Nova Scotia, Canada, where participants discussed global warming. "I heard scientists from a number of different states and provinces speculating that with climate change, we might be seeing some problems, especially along the southern edge of moose distribution," Lenarz says.

The ability of moose to maintain their population in the northeast while dwindling in the northwest is founded on differences in the two habitats. "The northwest has never looked like classic moose range--it's aspen parkland and agriculture," Lenarz says. Huschle adds that the northwest is drier and warmer than the northeast. "The climate in the northeast is moderated with the deep, cool lakes and evergreen habitat. You have shade in the spring. Snow persists longer over there. I think the climate there is just a little cooler." But the unexplained moose deaths in the northeast could be an indicator of problems to come. "They might be approaching that threshold, but just haven't gotten there yet," Huschle says. Murray believes the northeast moose may follow the same path as those in the northwest. "I think over the long term, they will succumb to the same fate," he says.

Doug Smith is a staff writer for the Minneapolis Star Tribune.

In partnership with affiliates such as the Minnesota Conservation Federation, Wisconsin Wildlife Federation and Michigan United Conservation Clubs, NWF is working in the Great Lakes area with state agencies to develop policies that help wildlife cope with global-warming-related stress. NWF and these affiliates also are working to develop state and federal policies that reduce global warming pollution, ensure funding for wildlife and bolster state economies.

NWF's report Waterfowler's Guide to Global Warming highlights the impacts of global warming on waterfowl and has encouraged Great Lakes conservationists to combat global warming while preserving waterfowl habitat. NWF's Minnesota, Michigan and Wisconsin affiliates passed resolutions at their annual meetings calling for Midwest governors to take the political lead in controlling regional global warming pollution. "Global warming is really hitting us hard in the whole northern tier of Minnesota,"says Gordie Meyer, president of the Minnesota Conservation Federation. "One of the first things we've got to do is get power plants to get their carbon dioxide emissions down to reasonable amounts," he adds, referring to fossil-fuel-powered electricity-generating plants, a leading cause of global warming pollution. For more on NWF's work against global warming, go to www.nwf.org/globalwarming.